I've been very busy over the past few days and haven't had the chance to report on fishing.
Let me begin by confirming that the search for my first 2013 Springer continues.
I fished the Dee twice last week along with a couple of sessions on the Finn and a day on the Lackagh.
The Dee dropped to a nice height last week although the colour lingered about for the whole spate. I fished down through a couple of runs quickly using a sinking shooting head and a large RS Super Snaelda.
No fish succumbed to the fly, not even a kelt. 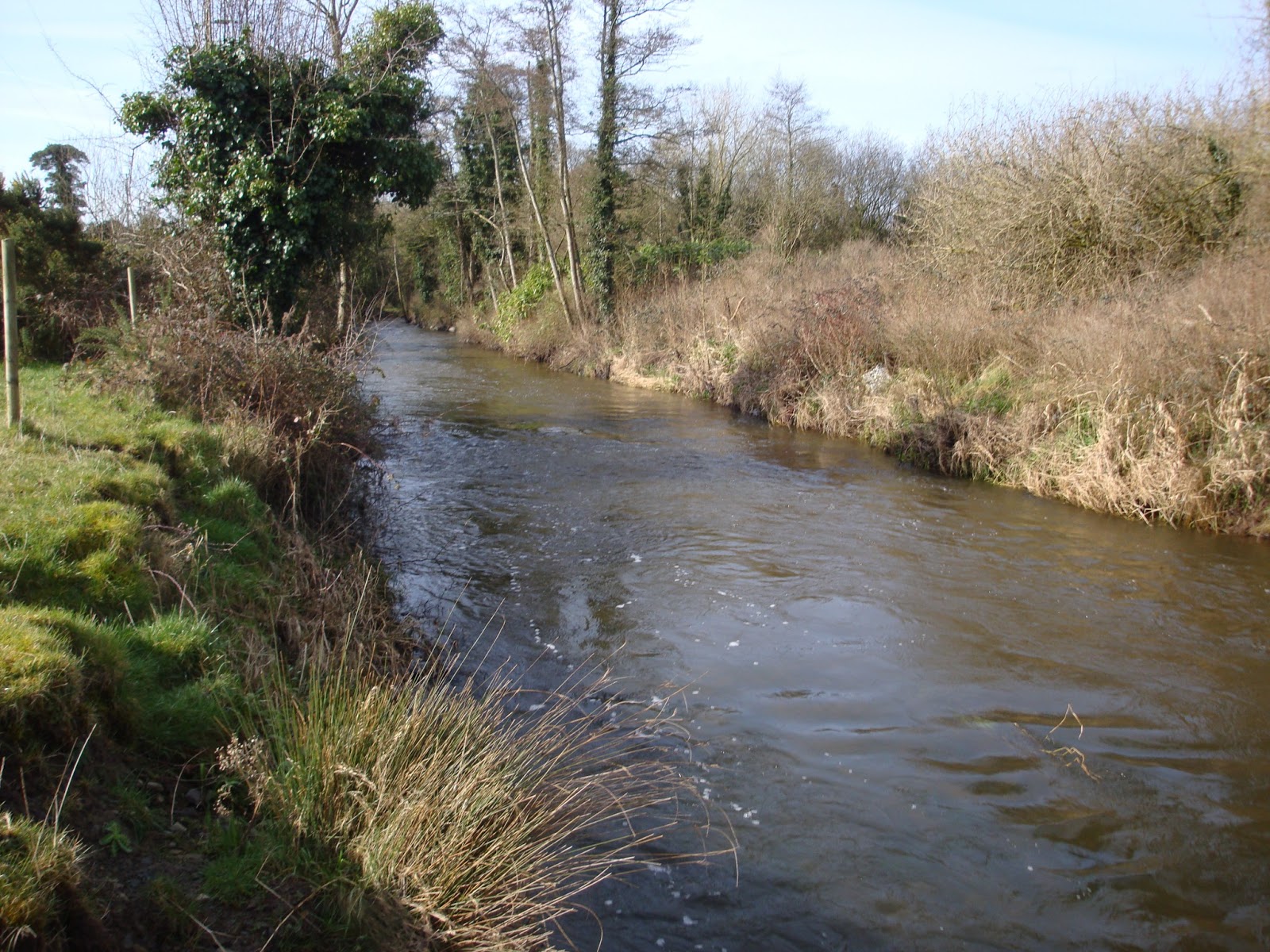 Good water on the River Dee 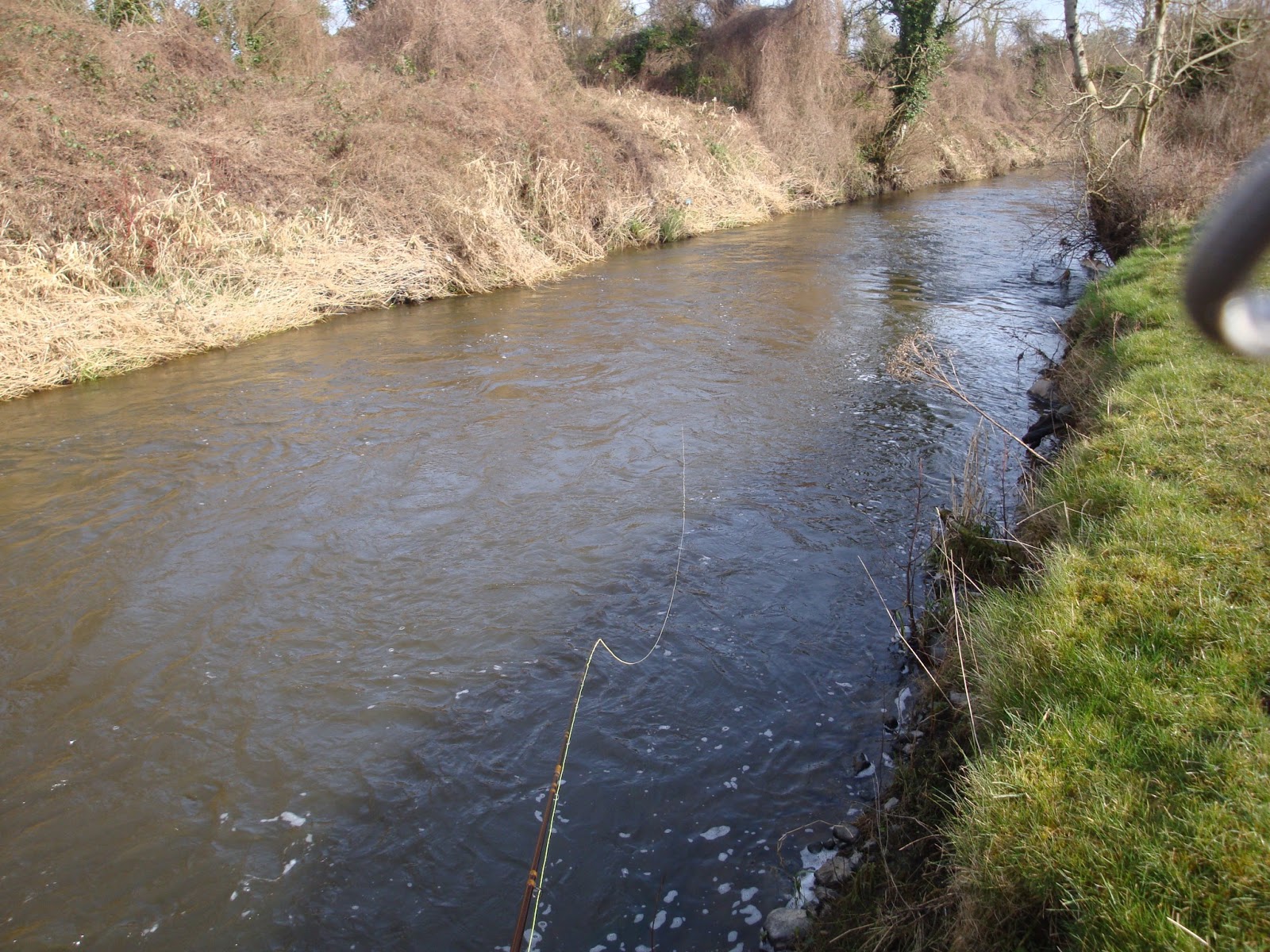 Swinging 'er through a nice tail. 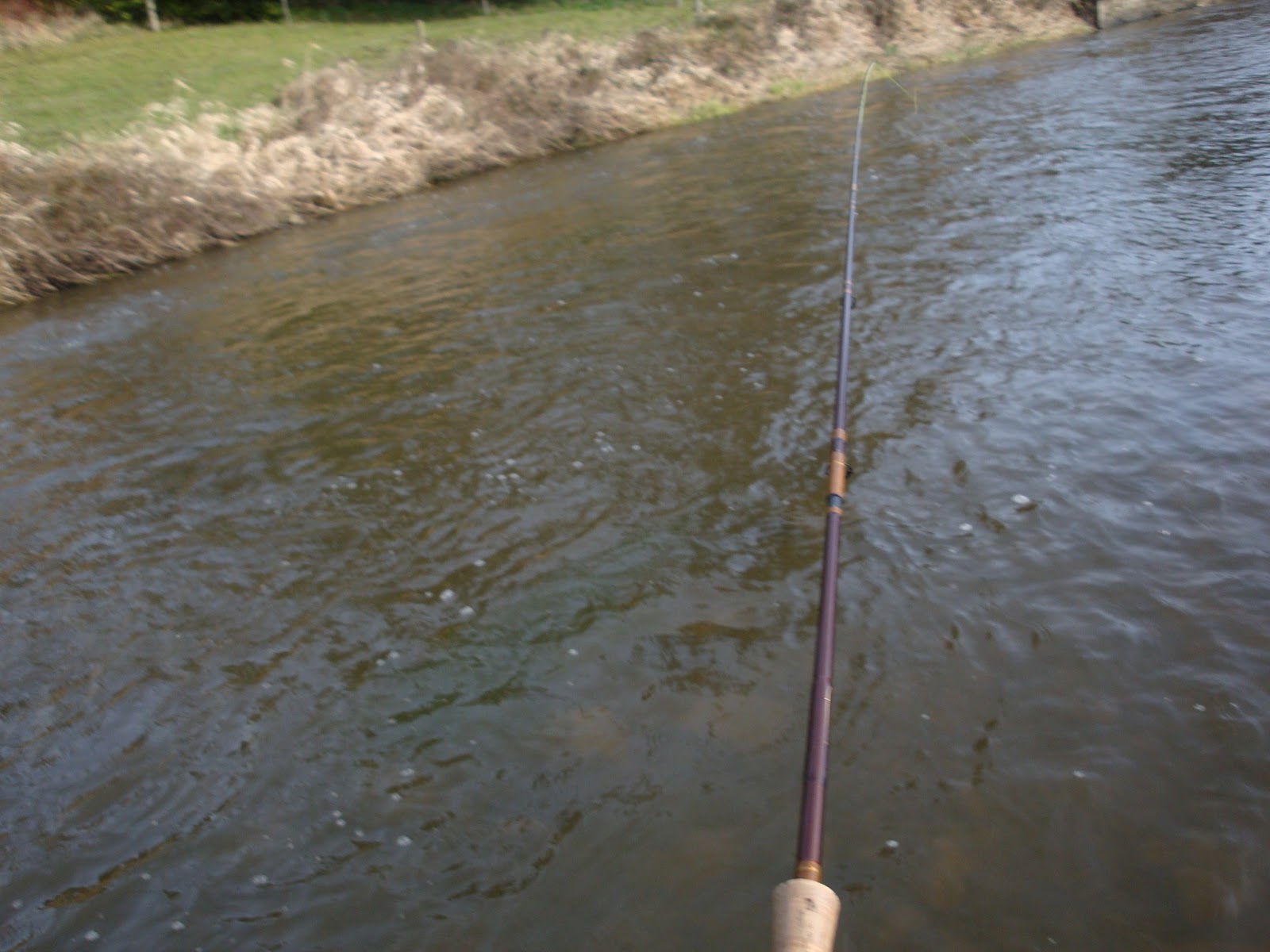 Rod cam. on a clearing Dee.

The Finn rose to 2ft on Friday so I decided it was time to get back up to Gleann Fhinne and resume the hunt for chrome up there. 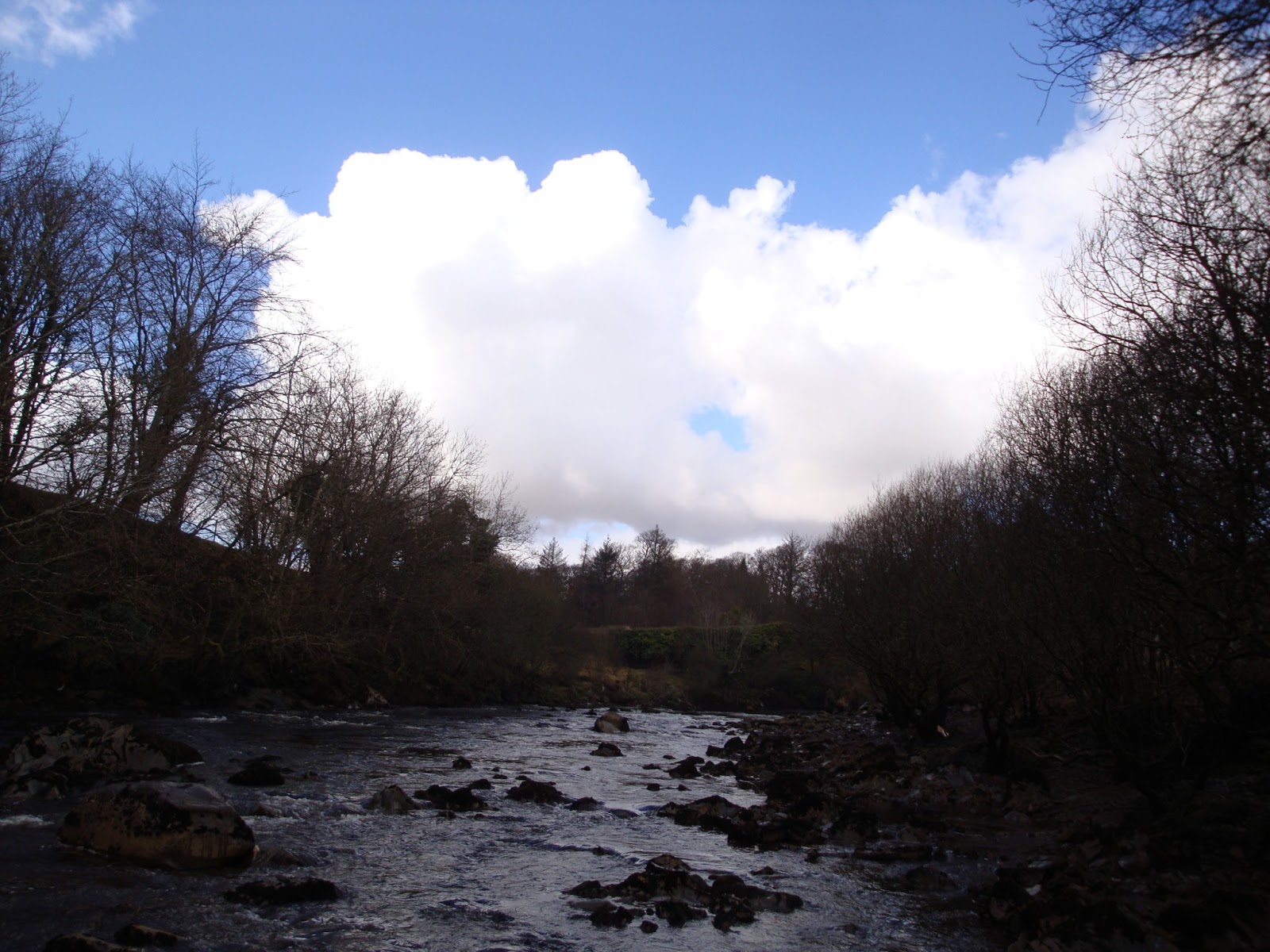 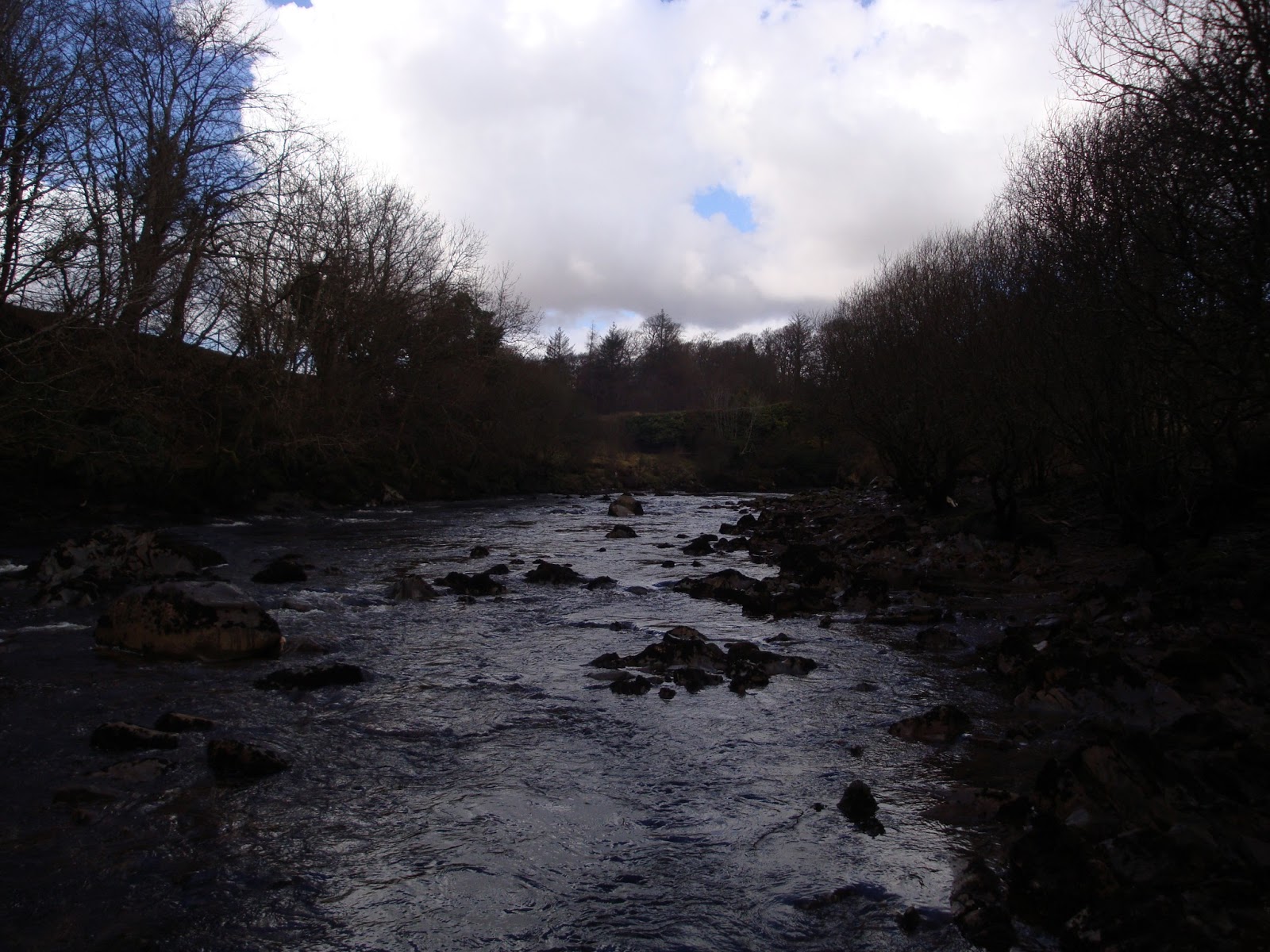 There was a hard frost on Friday night and with air temperatures dropping to a low of -5 in Donegal, the water dropped out of the Finn very quickly and by Saturday morning the river was under 1' on the gauge at Glenmore. According to the O.P.W. meter reading at Ballybofey, the water temperature was around 3.5c on Saturday. Seriously cold water conditions for salmon fishing. I called on Sim at Glenmore and met Joe Early, a Zpey, Echo and Airflo tackle dealer from Co.Derry as well as a couple of other familiar season rods. It was good to catch up and swap stories from last season and nobody was in much of a hurry to get to the river. I must confess that even when the fishing conditions are good, I prefer not to be in too much of a rush to get fishing. I find days out far more enjoyable when things are relaxed and chilled out.
Eventually, however, I managed to get myself sufficiently motivated to get down to the Ivy Bridge. I started off at the 'V', the pool just below the Ivy Bridge which is a great lie for salmon at any time of the year. Springers sit at the back of the pool after negotiating some heavy water. This is probably one of the most reliable throws on the whole river. 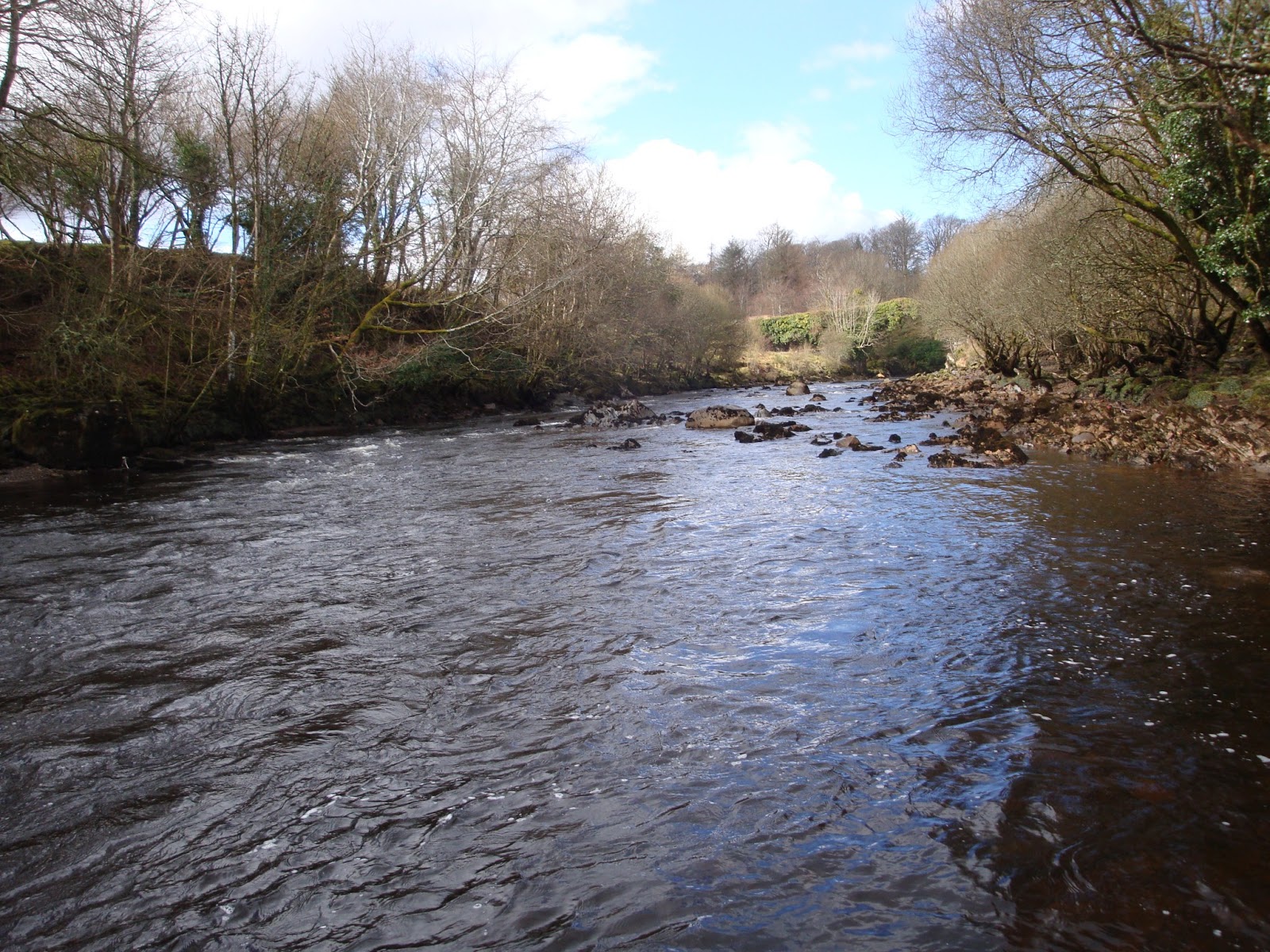 Carlins
I worked down through Carlins, Leonards, the Glebe and, of course, the Graveyard. The water was a bit on the low side for the Graveyard and I always find it a bit boring at this height. I also fished the Island Pools at the end of the beat but not a sign of a fish anywhere. 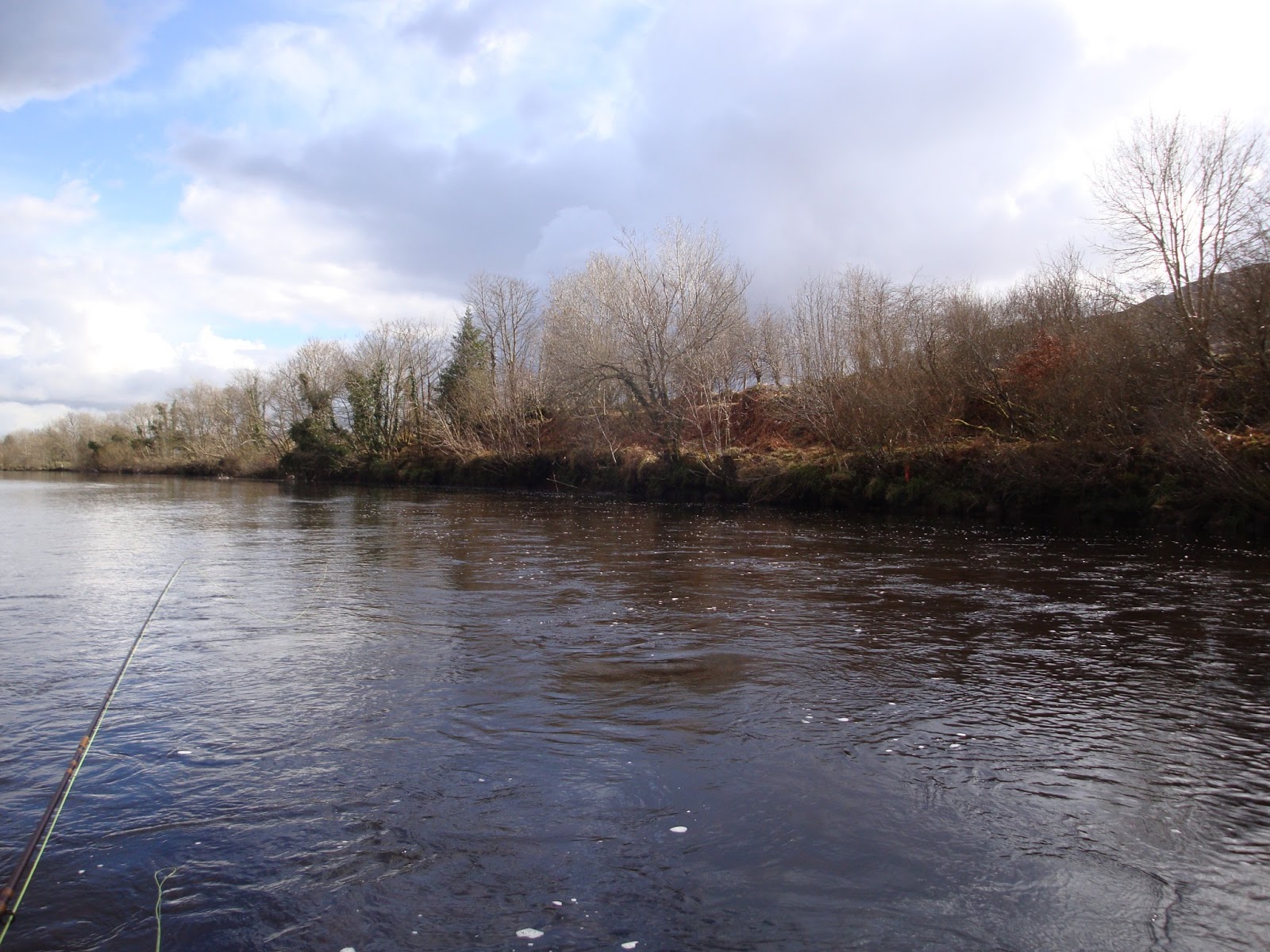 Making my way down to the prime Spring lie on the Graveyard.
It's important to hit the far bank here!

On my way back to the car, I bumped into Co.Antrim men Andy McGall and Andy Jaffrey. I bump into Andrew 'Easkey' McGall, from time to time in these parts, and it's always great to glean a few pearls of wisdom from fellow switch rod enthusiasts. 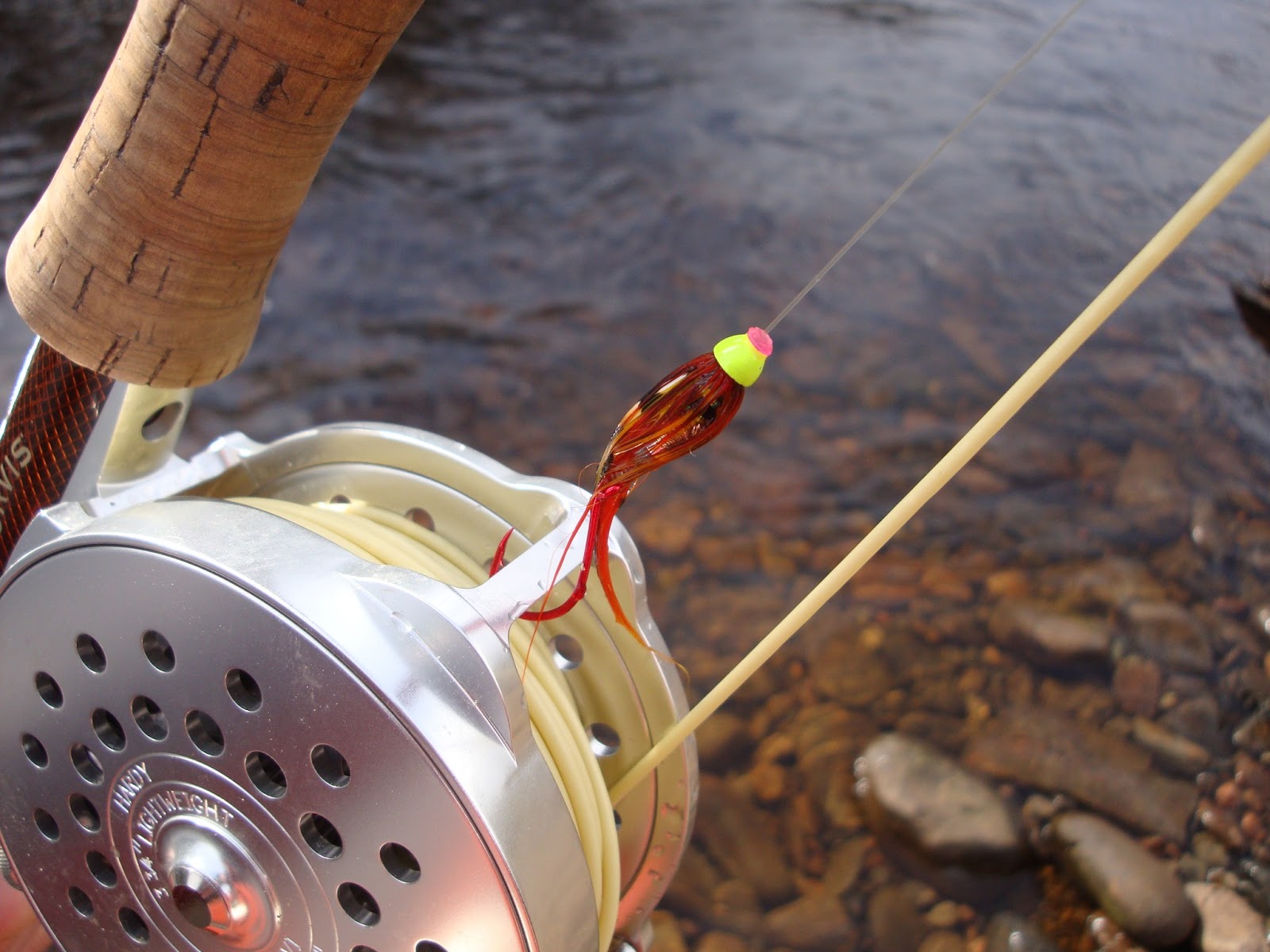 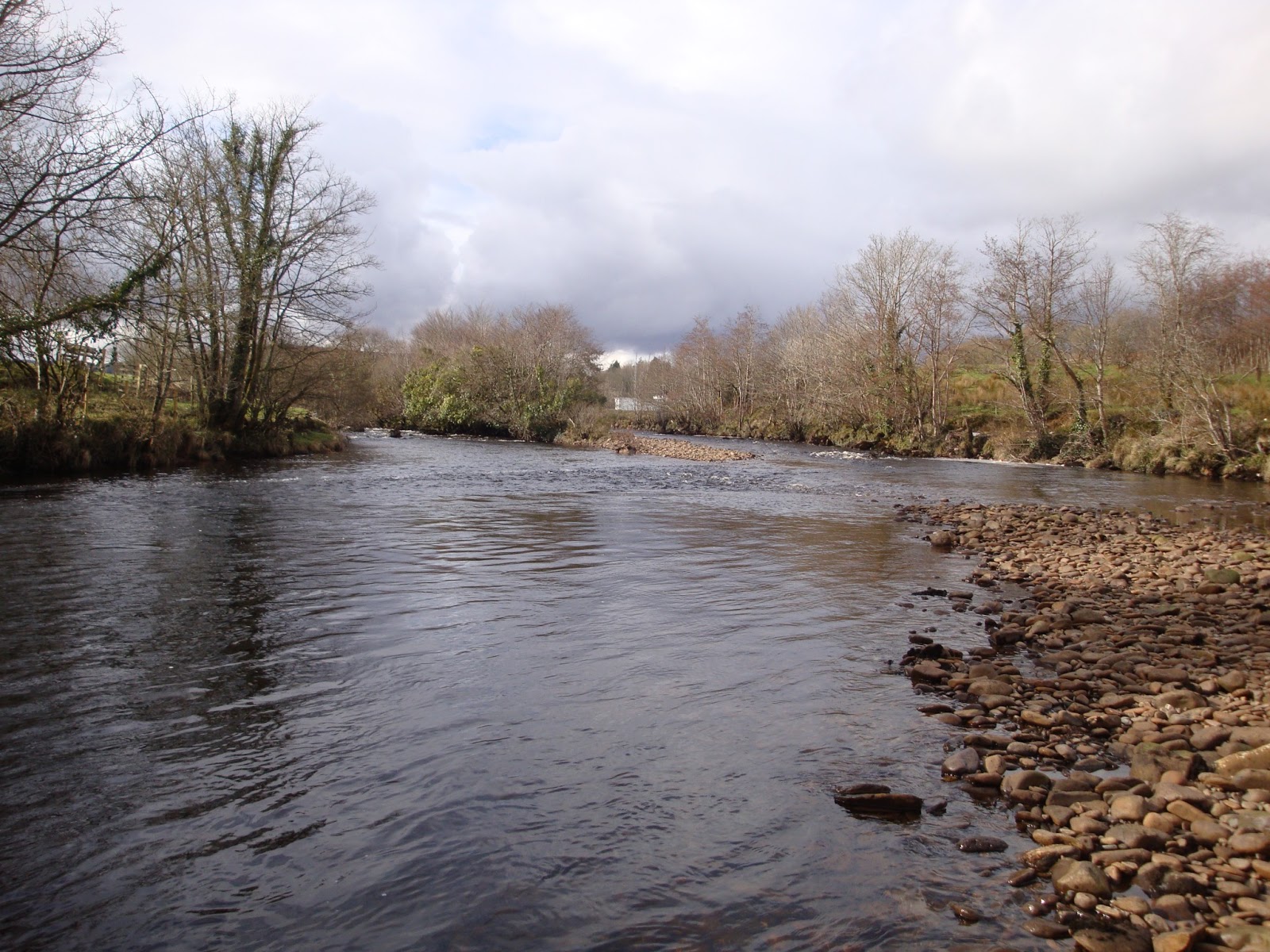 Island Pool
An enjoyable, cold, first day out on the Finn. At least I have the season ticket sorted now and I can fish the open water as I please.
I hit the Lackagh for high tide on Sunday morning. I was delighted to see the river sitting just below 7 on the  guage and confidence was high. 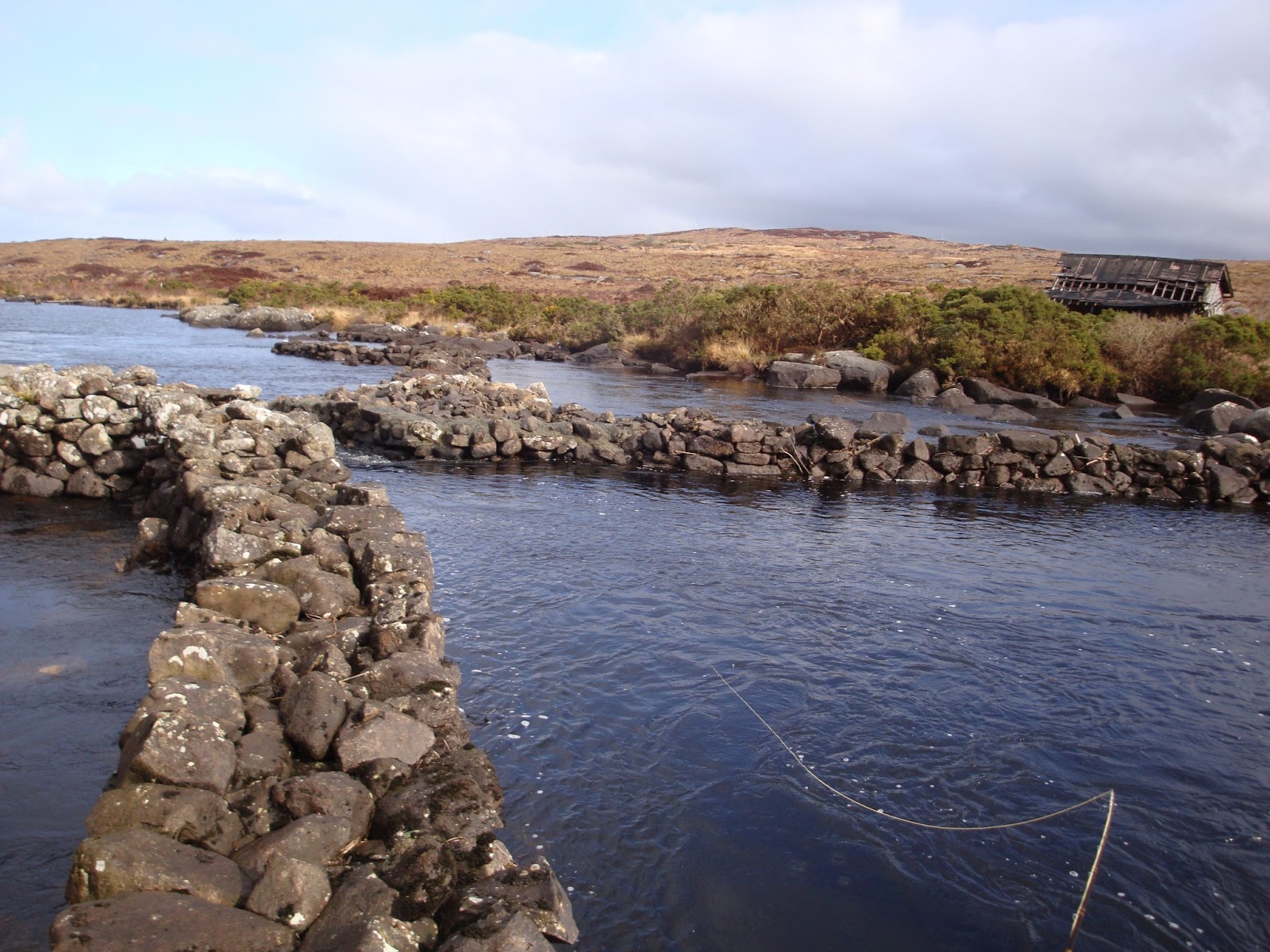 Gin clear water meant that a stealthy approach was in order in case any fish were sitting at my feet. A stiff, biting wind swept up the river from the estuary down at the Ards, making life uncomfortable. Thank  goodness for Simms! 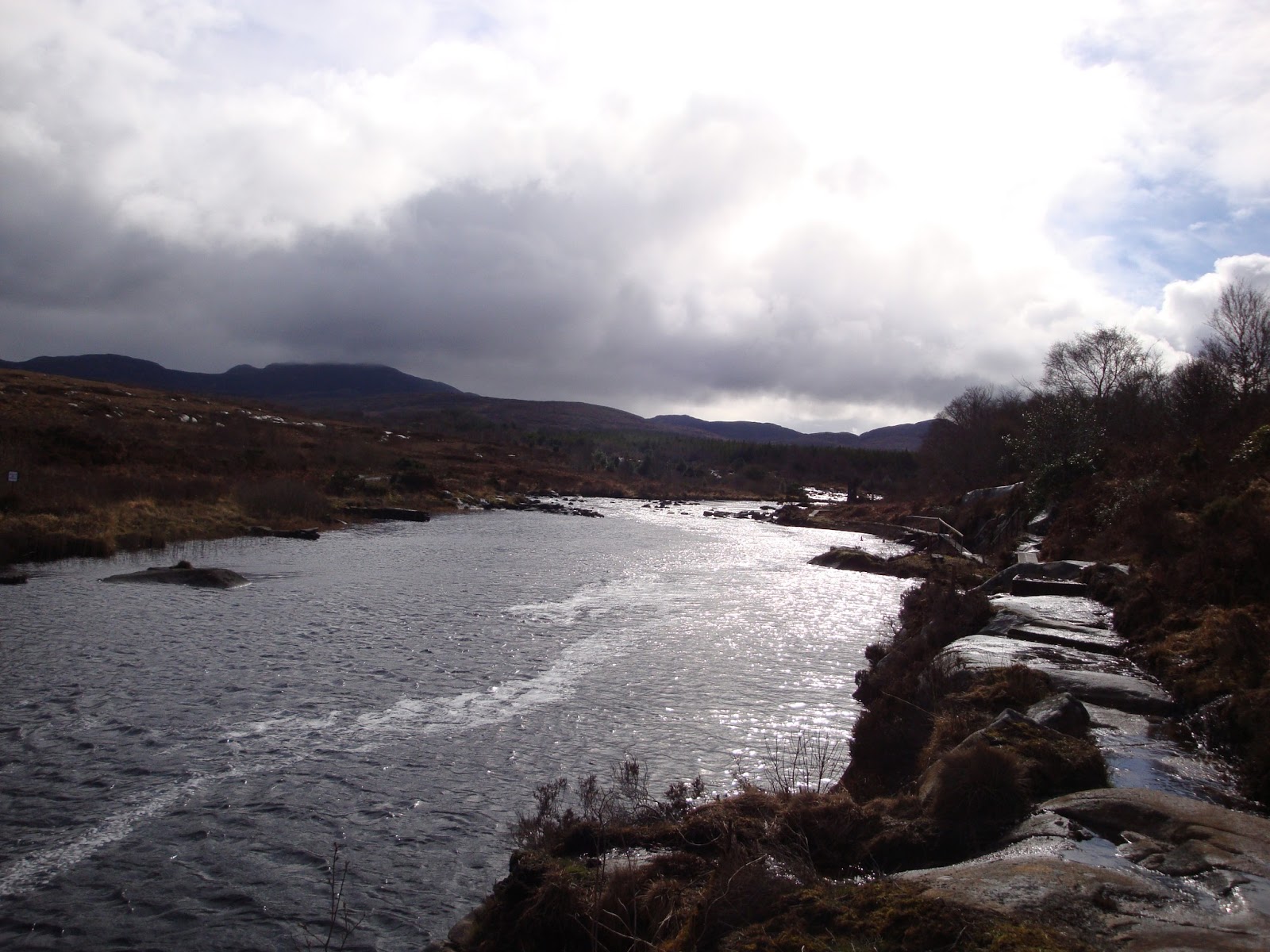 A bitterly cold upstream breeze on the Lackagh. 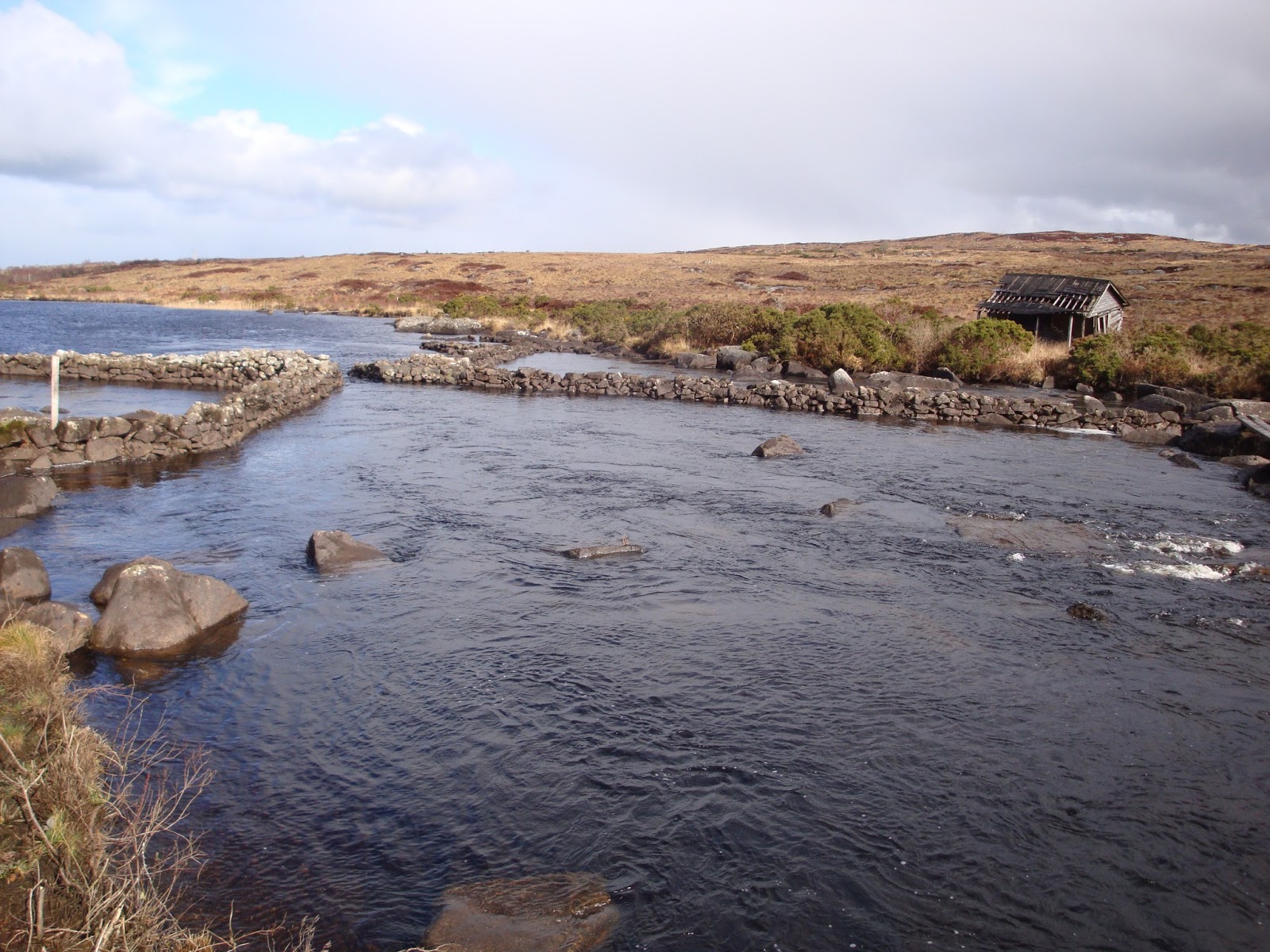 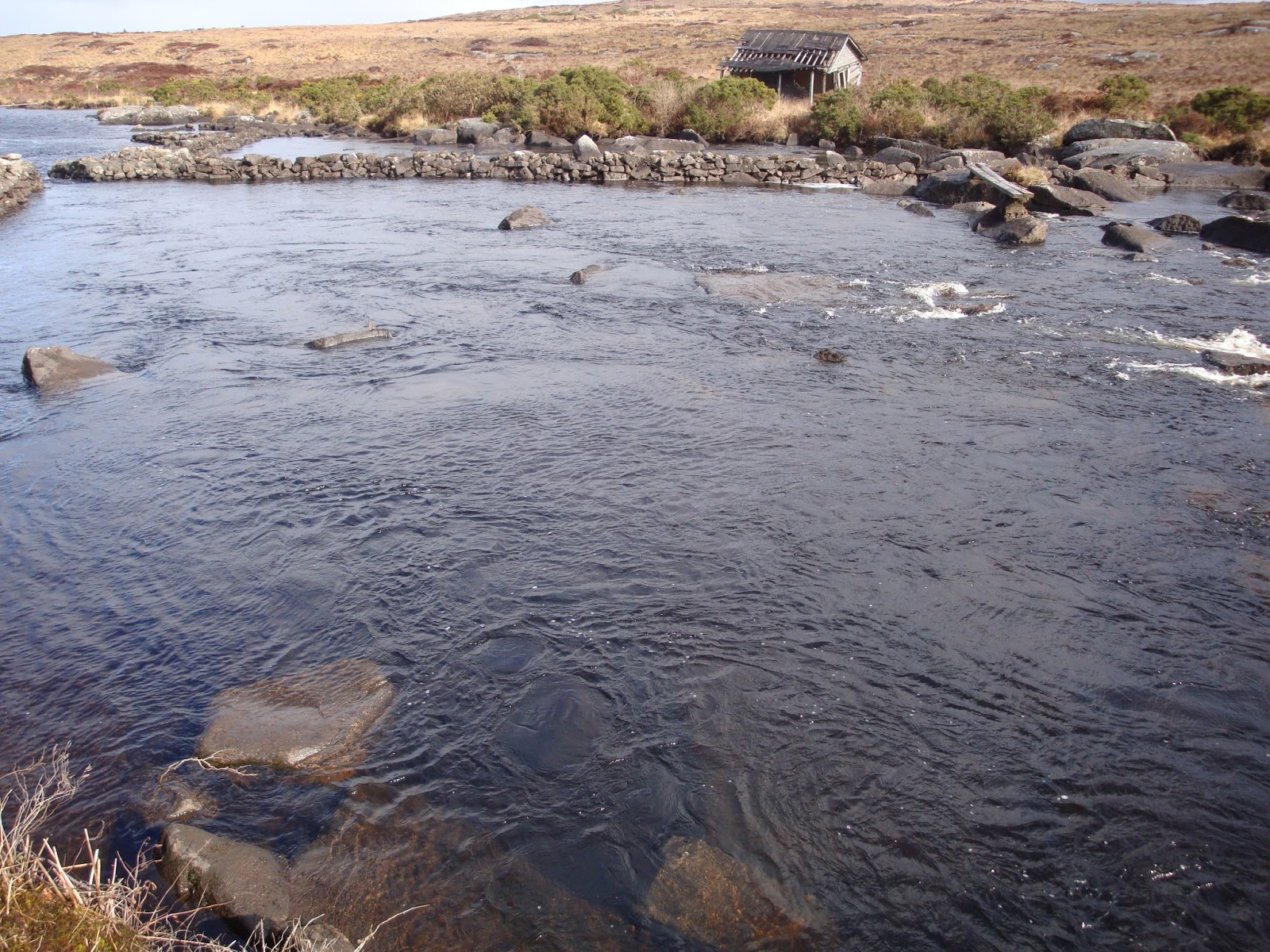 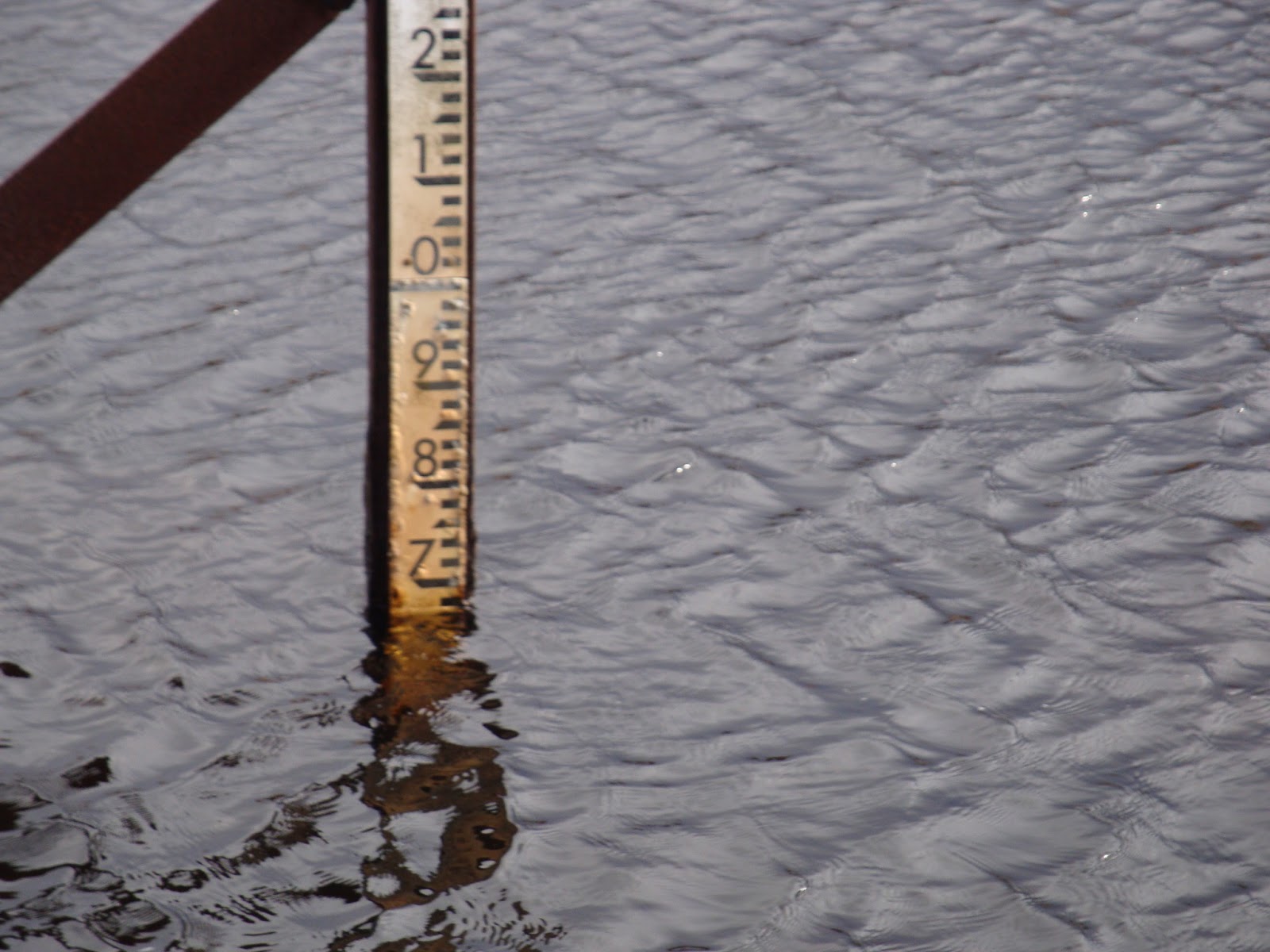 Nice water height!
I fished the Eel Weir using the Rio Scandi/Short Versitip for half an hour in the hope that a fish might have moved in off the tide, but nothing. I then headed up to the Grilse Pool and worked down through the Garden Pool and back to the Eel Weir. 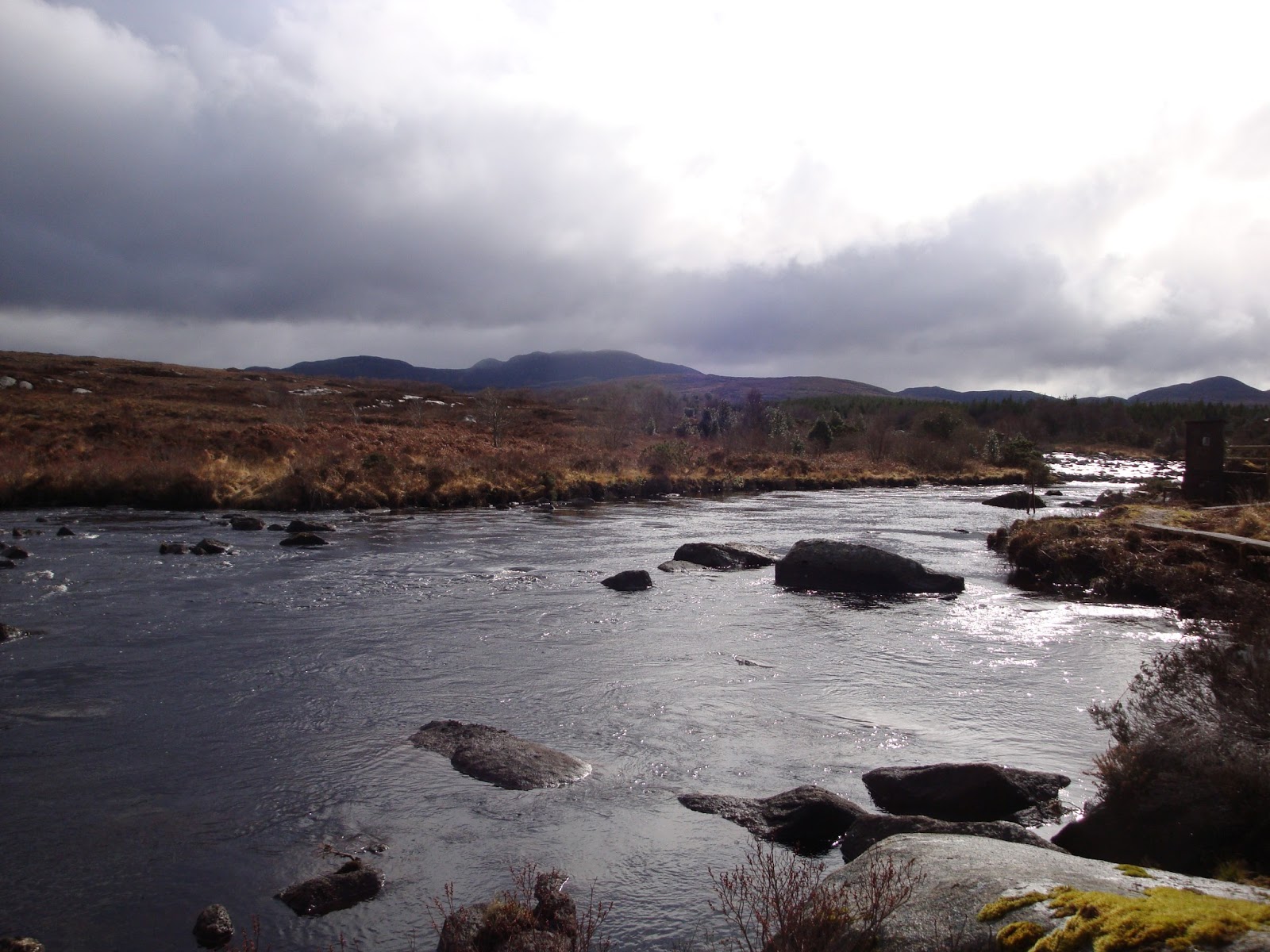 Tail of Grise Pool.
I then set up my new Airflo Skagit Switch line with 10' T14 leader and a tungsten conehead Black and Yellow Snaelda. The Skagit line weighs 510 grains so overhead casting with this line on my 8wt. Orvis Access Switch will likely result in a broken rod. Using waterborne anchor casts such as the snap T and Perry Poke, the skagit flew out and turned over the level sink-tip effortlessly. This line has serious potential for dredging. It's sure not subtle but it has a worthy place in any salmon anglers armoury. I might try and get my hands on some of the Skagit Master DVDs and try to adapt some of the techniques used by North American Steelhead Rats for use on Irish Atlantics. It will probably be more difficult using the skagit on my local rivers where overhead casting is often needed but I'll try it out next week anyway. I finished up early afternoon on the Lackagh without a touch of a fish. 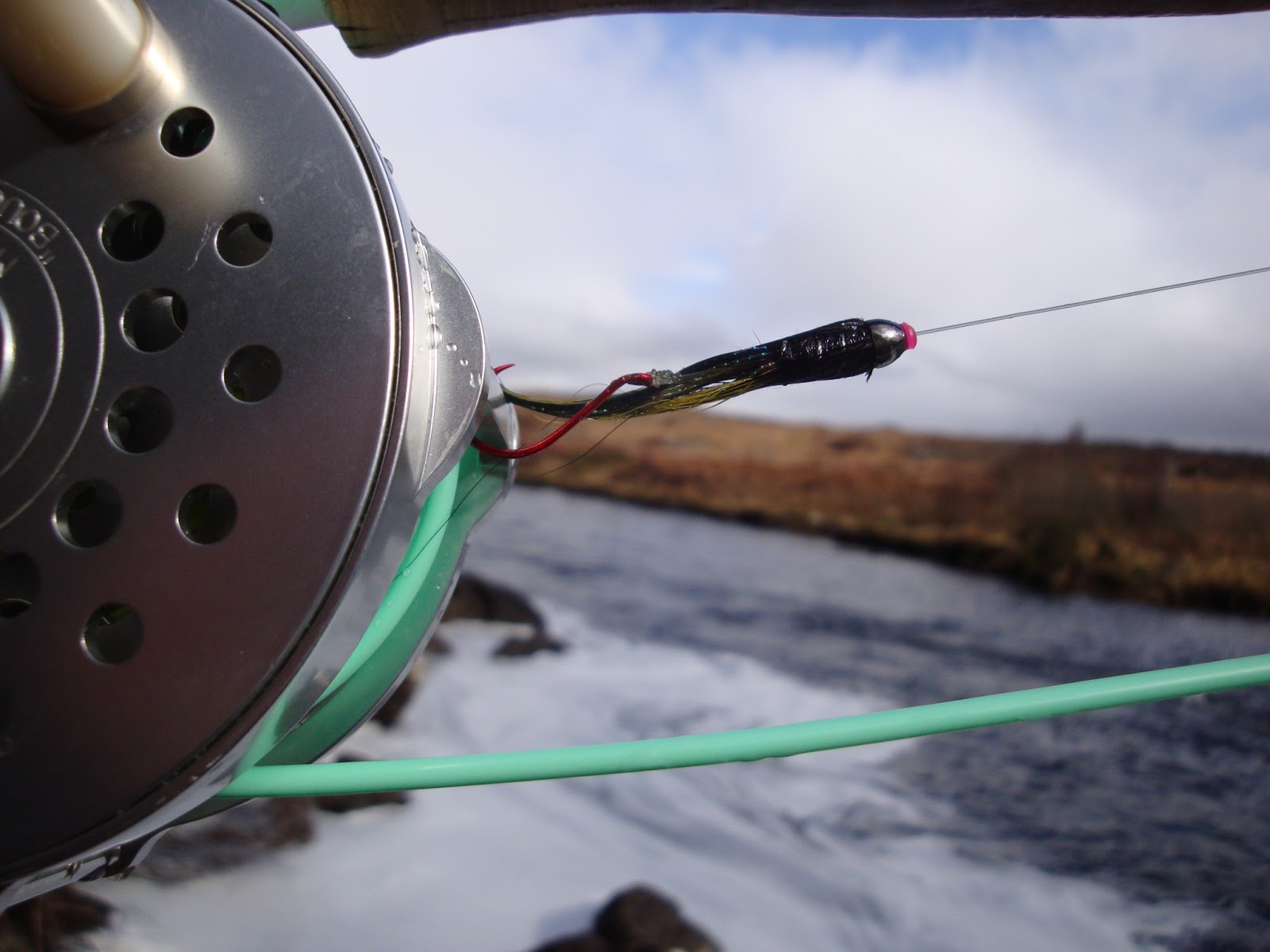 Skagit Time!
It was back to the Finn on Monday morning. The bank holiday meant that an extra days fishing was possible. The Finn was relatively quiet Monday morning; sore heads were probably had by manys a man after the St. Patrick's day festivities. I fished down through Key's and then tried Martin's before heading up to McGinty's.
A few hours fishing sated my angling appetite for a few days and I headed back down to the Wee County. Easter holidays on Friday means that I'll get a chance to do some more fishing in the coming days and I'll endeavour to keep the updates regular while I'm out and about. 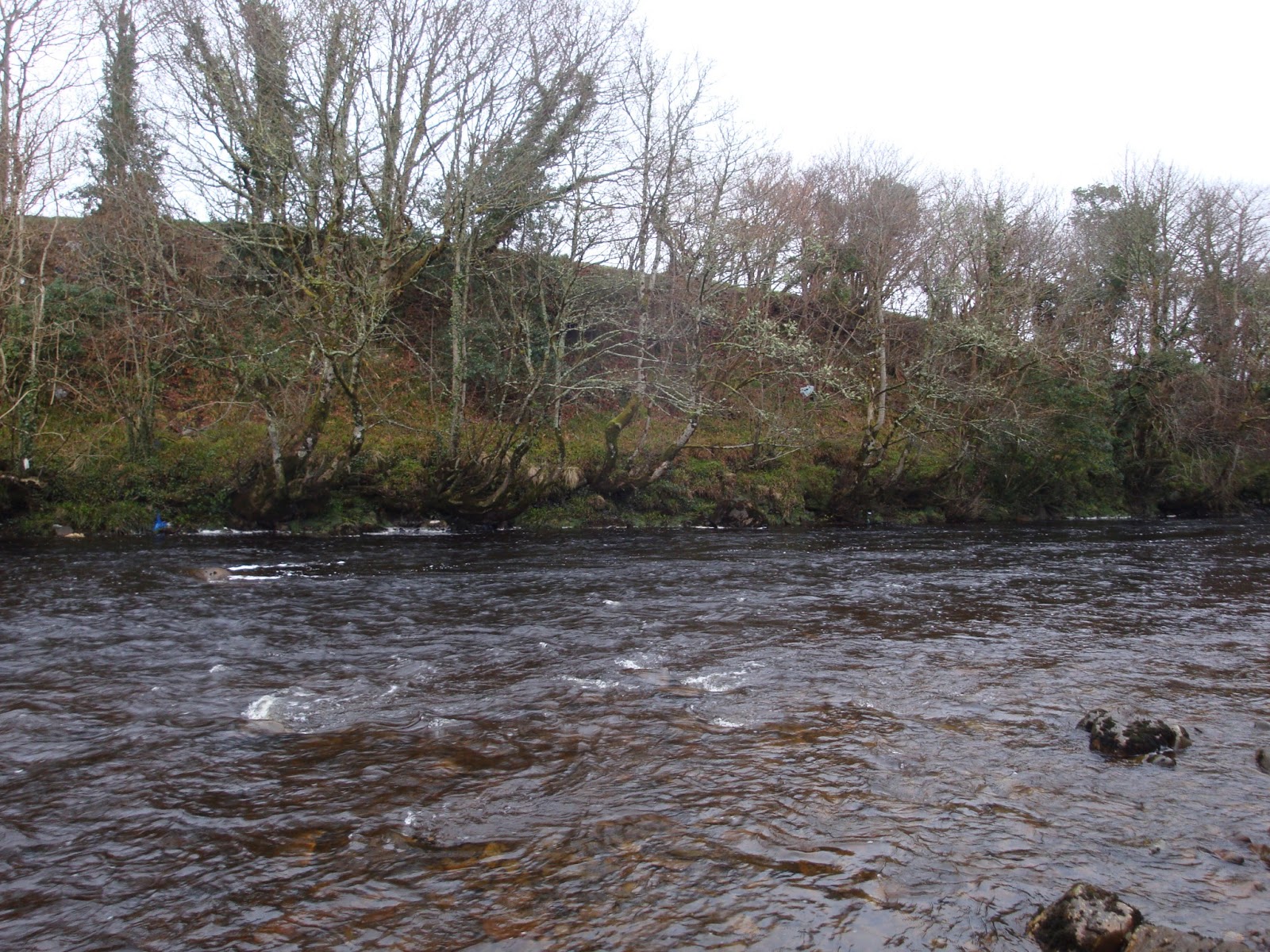 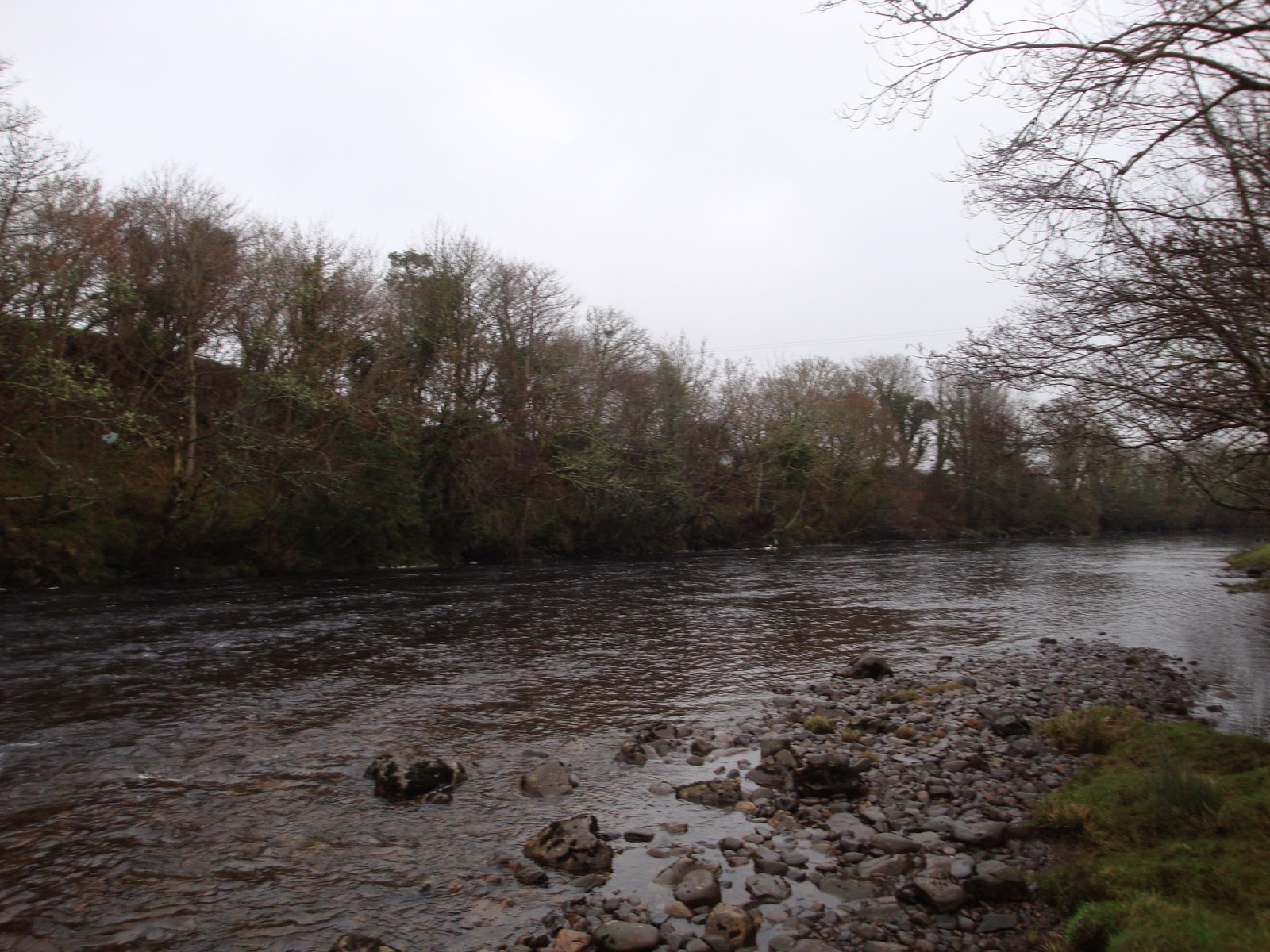 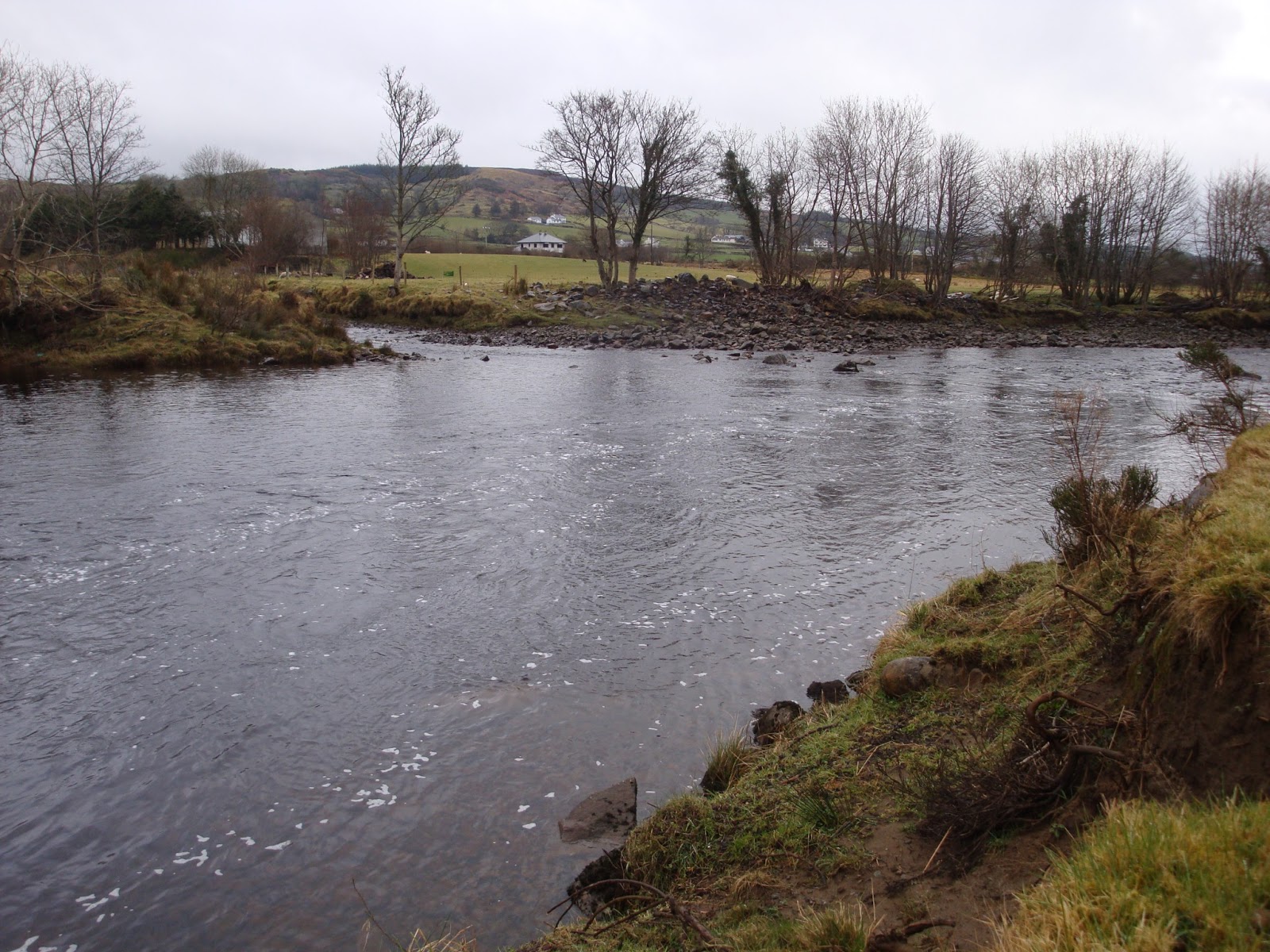 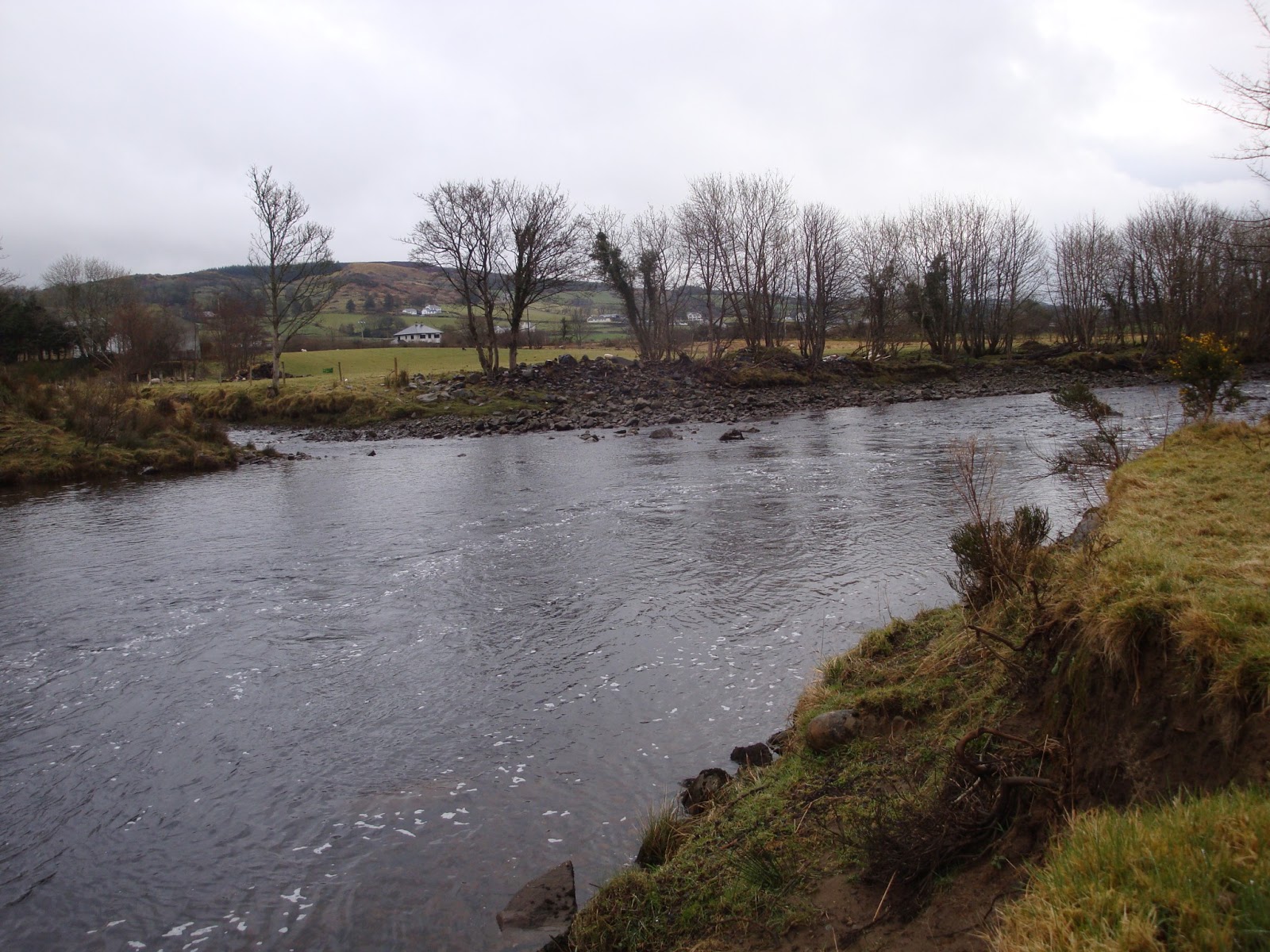 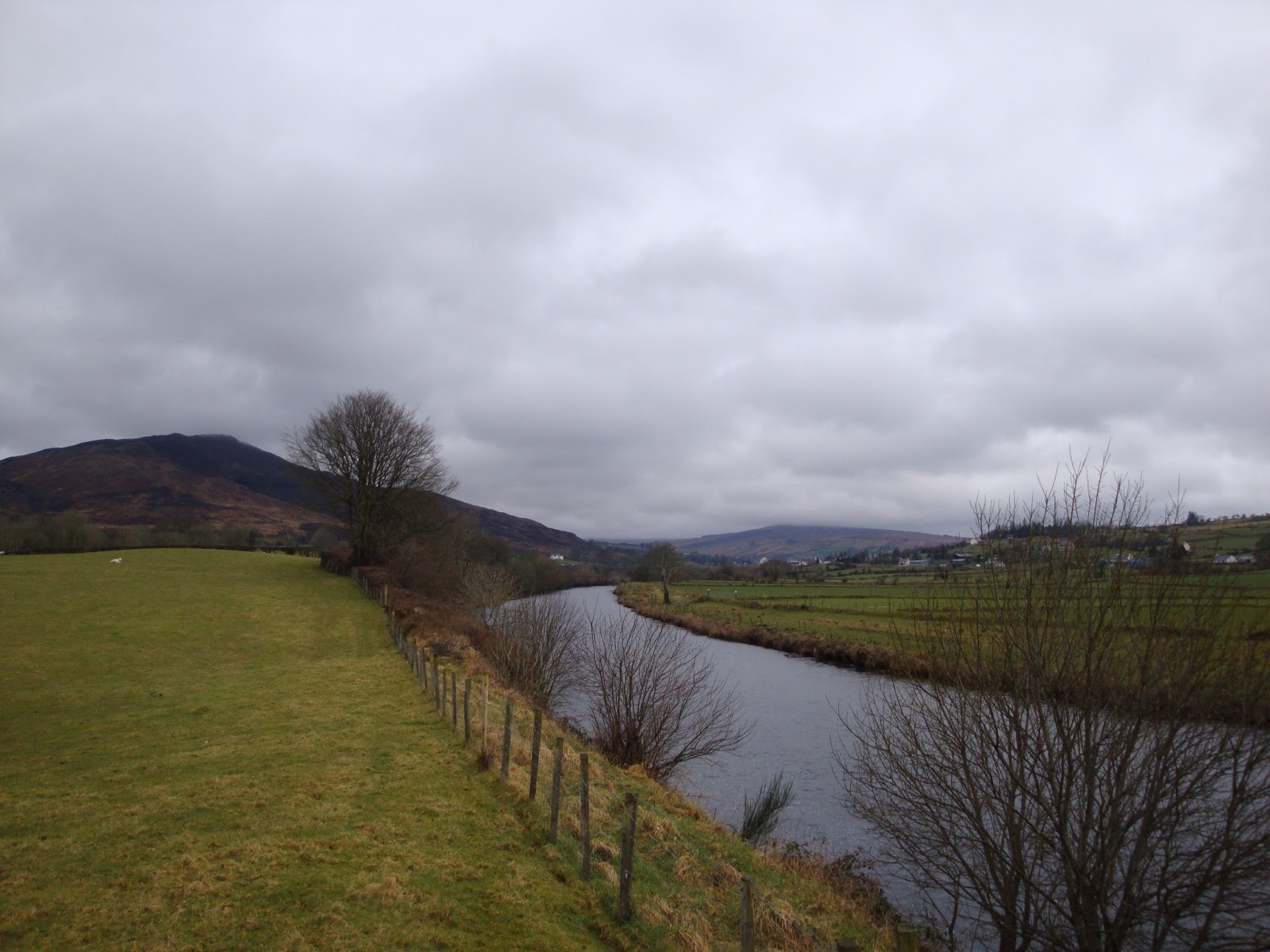 Tail of the Grilse Stream 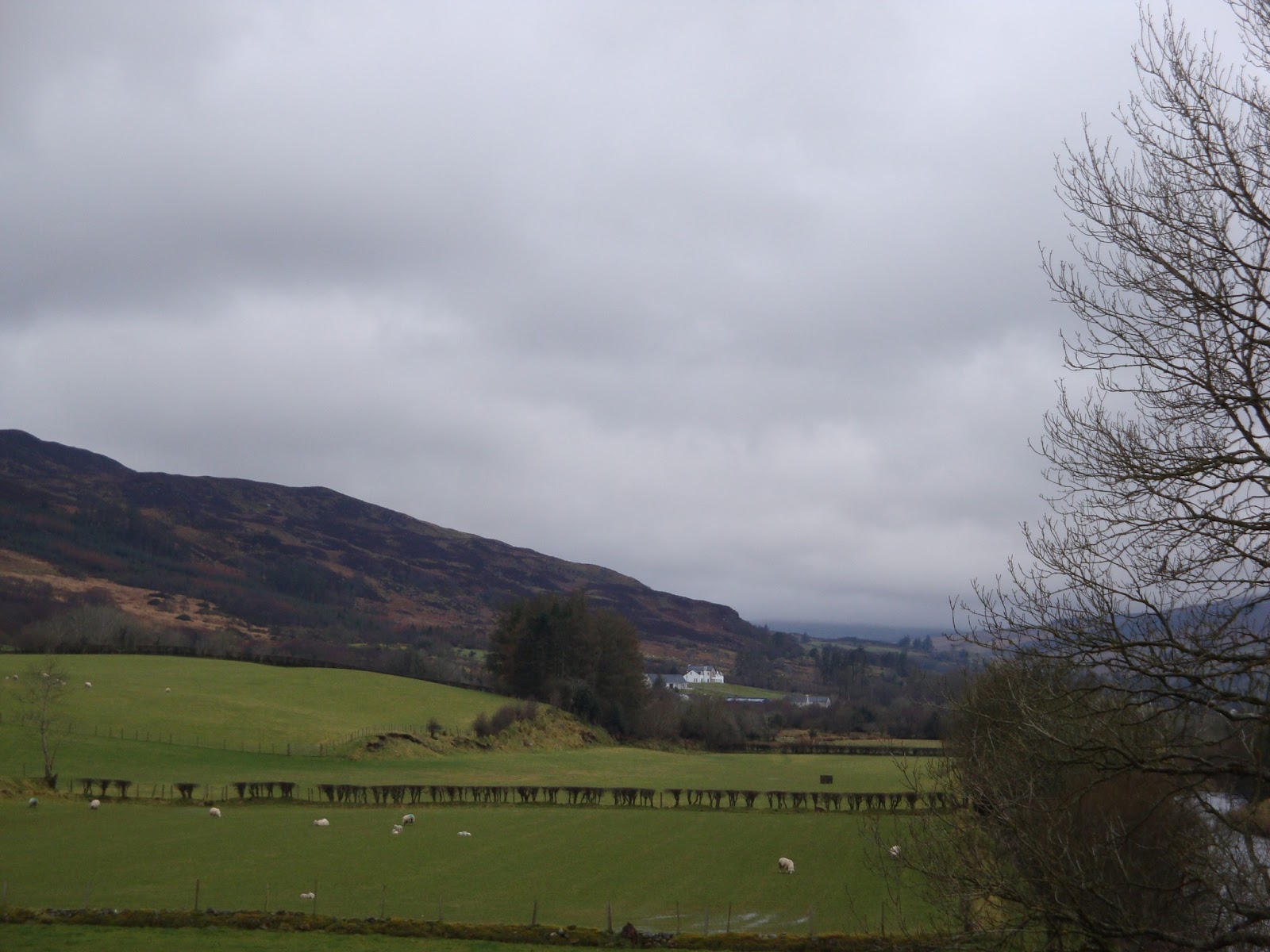 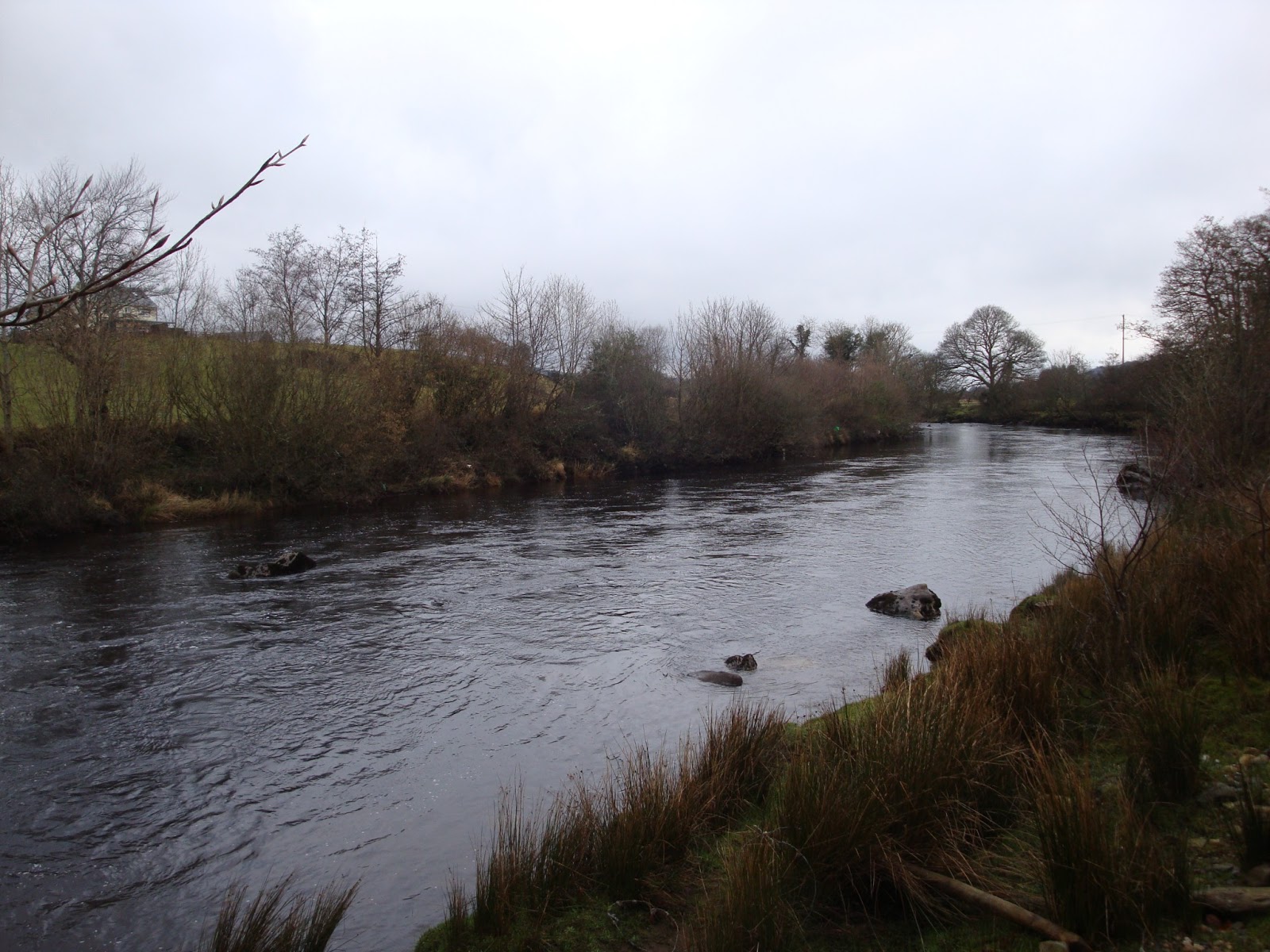 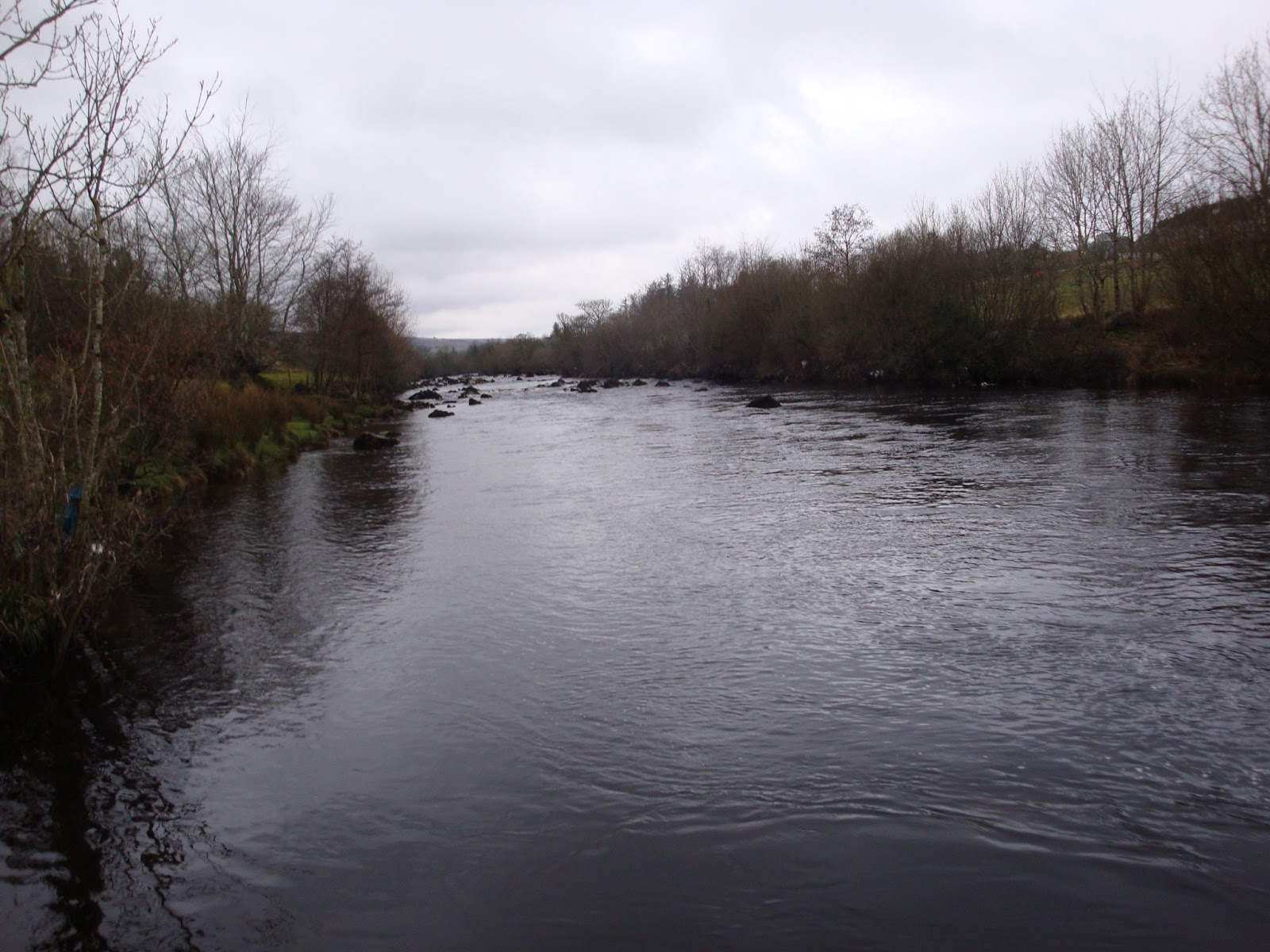 I plan to fish local for the first week of the holidays. It's raining heavily at the minute so we'll probably have very high rivers around here for a good few days. Once they clear however, I'll be up on the Dee and Glyde searching for that ridiculously elusive springer.
I've a few new purchases to look forward to: A new jungle cock cape will inspire me to get to the vice; I've a load of half finished flies lying about the place. I've a 5wt Orvis Switch line on the way for my 5wt Access although this rod will not be brought out of hibernation until the grilse start running the Finn in earnest. I'm also selling my 13' #9 Grey's Greyflex Mk2 so if any of you want a nice spate river rod, get in touch!
Posted by Unknown at 17:24