The River Slaney, in Co. Wexford is one of Ireland’s top rivers for spring salmon. The Slaney flows through some of the best farmland in the country; in a county possibly better known for its hurling and its strawberries. This region is also known as the Sunny South East because it gets more sunshine than any other part of Ireland. Wexford’s coastline boasts some superb bass fishing for those in the know, but it was the county’s salmon I was after, last Saturday. 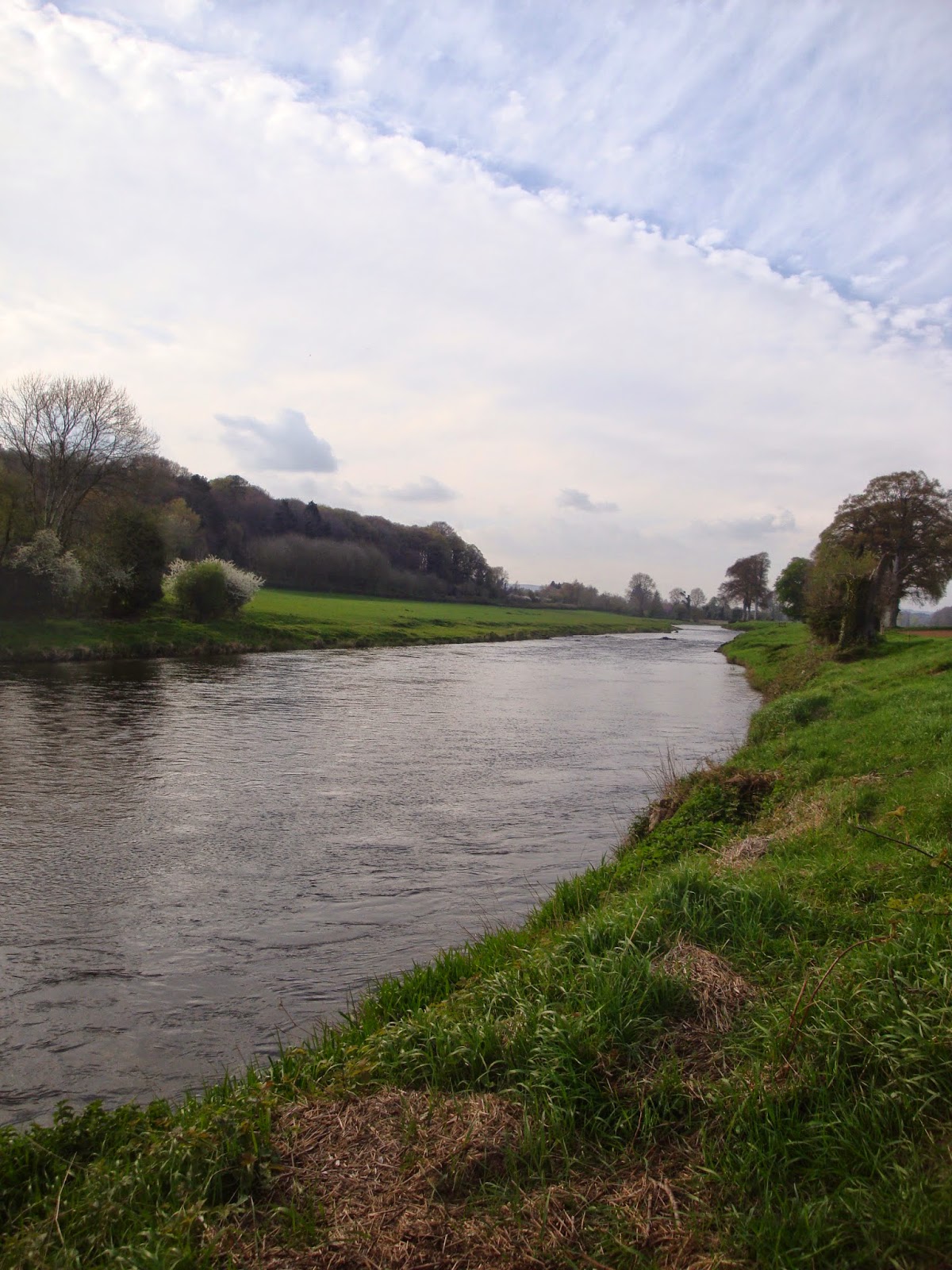 While out flogging the Dee during the week, I got a welcome phone call from fishing buddy, Simon Cassidy, to join him for a day on the Slaney. Naturally, I jumped at the chance..... I’d be very foolish to turn that offer down. So we met up down in the Slaney Valley with high hopes for a successful day. Conditions weren’t exactly what you’d call perfect, with a bright, warm sun and hardly a cloud in the sky. The forecast, however, was for cloud to build later on in the aftenoon.
Most of my spring fishing is done on the Mourne and Finn on the Foyle system as well as my local Rivers Dee and Glyde. The Slaney is a different class of a river altogether. For a start, the water is gin clear. A lot of the pools are fairly deep and there is a strong flow which fishes the fly beautifully. Many pools reminded me of the Scottish Dee, I once fished at Deecastle.
We were fishing a three rod beat, so myself and Simon headed up to the top section after being shown the pools and likely lies. I started off on a small pot at the very top of the beat and tackled it with my switch rod setup and a float/sink3 Zpey Compact head. Fly choice was a small foxwing tube with a sunburst underwing and a natural grey fox overwing. 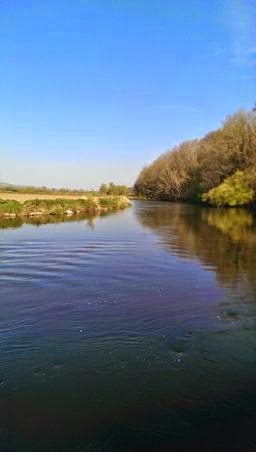 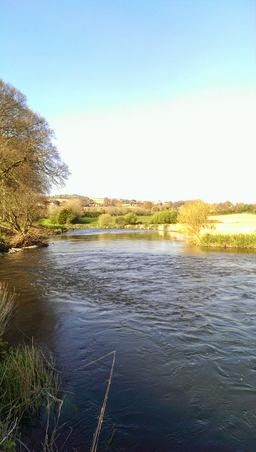 The switch rod was handy for overhead casting from high banks, while I used the 12’9’ Sage Z-Axis for wading. We fished hard until lunchtime without a touch, the bright, sunny conditions not helping our cause. I ended up breaking the tip section of my switch rod when I was picking it up from where it was sitting against some bushes. 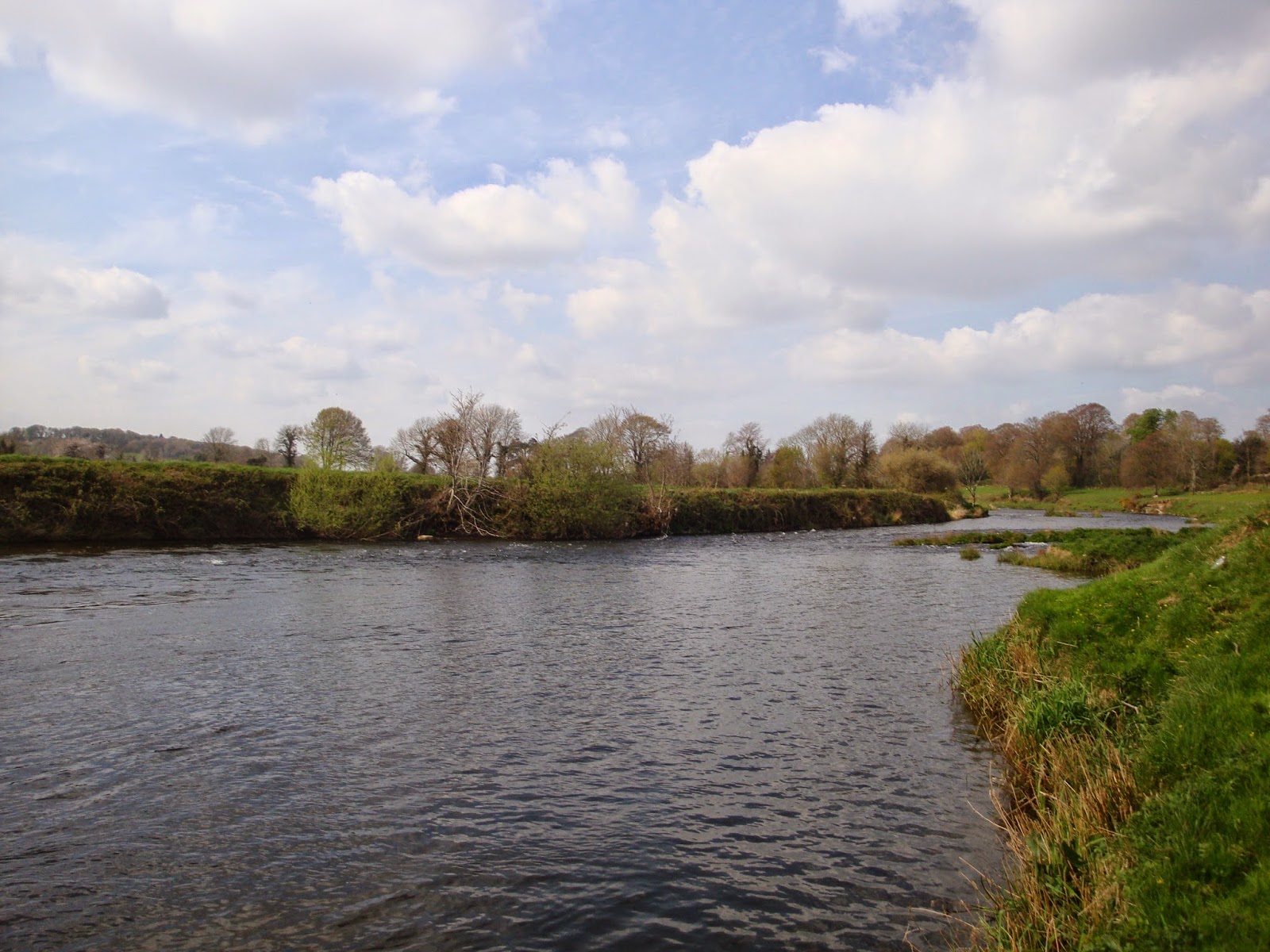 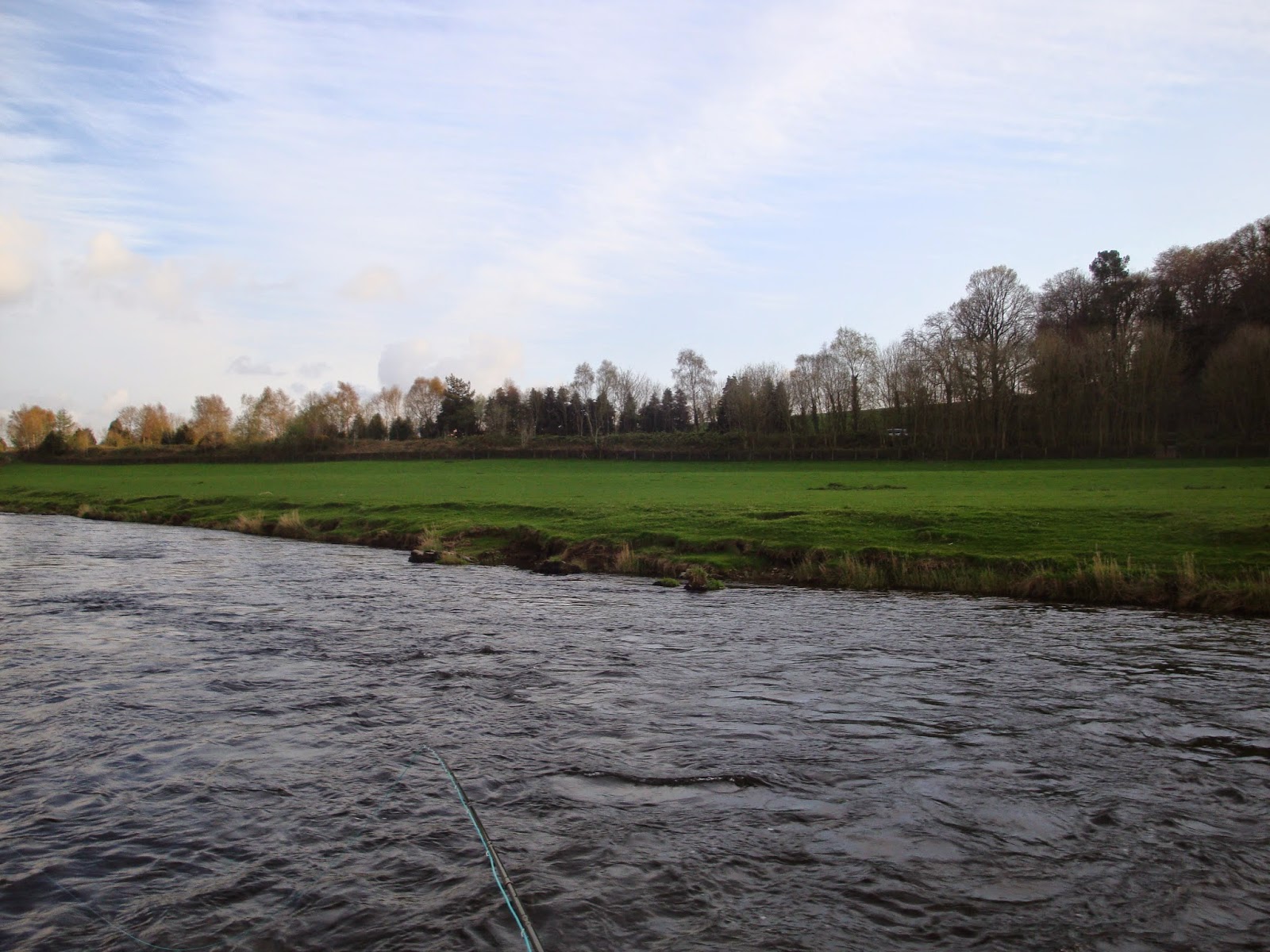 After lunch, I tackled the lower section of the beat. I perservered with a Guideline Sink 1/2 shooting head, a 15’ tapered leader and a small Black and Orange foxwing tube. I spotted a fish move in a lovely stream and when I covered the spot, was met with a strong draw on the line but the fish didn’t stick. I tried a smaller fly and also a Red Frances conehead but there was no response. Our kind host headed home at 5 O’ clock which meant that I could go back up to the top of the beat. I meant up with Simon who informed me that he had lost a double figure fish after a 5 minute battle. Confidence rising, I fished the pools we had fished earlier that morning, this time with a Float/Sink1 shooting head and the same long tapered leader. I decided to try a Sunray Shadow with a white bucktail underwing and fish it quickly through the pools. In one spot, a fish head and tailed over the fly and as the ling tightened, I was sure I was in business but surprisingly, I didn’t hook up. 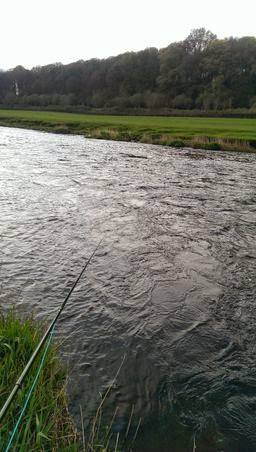 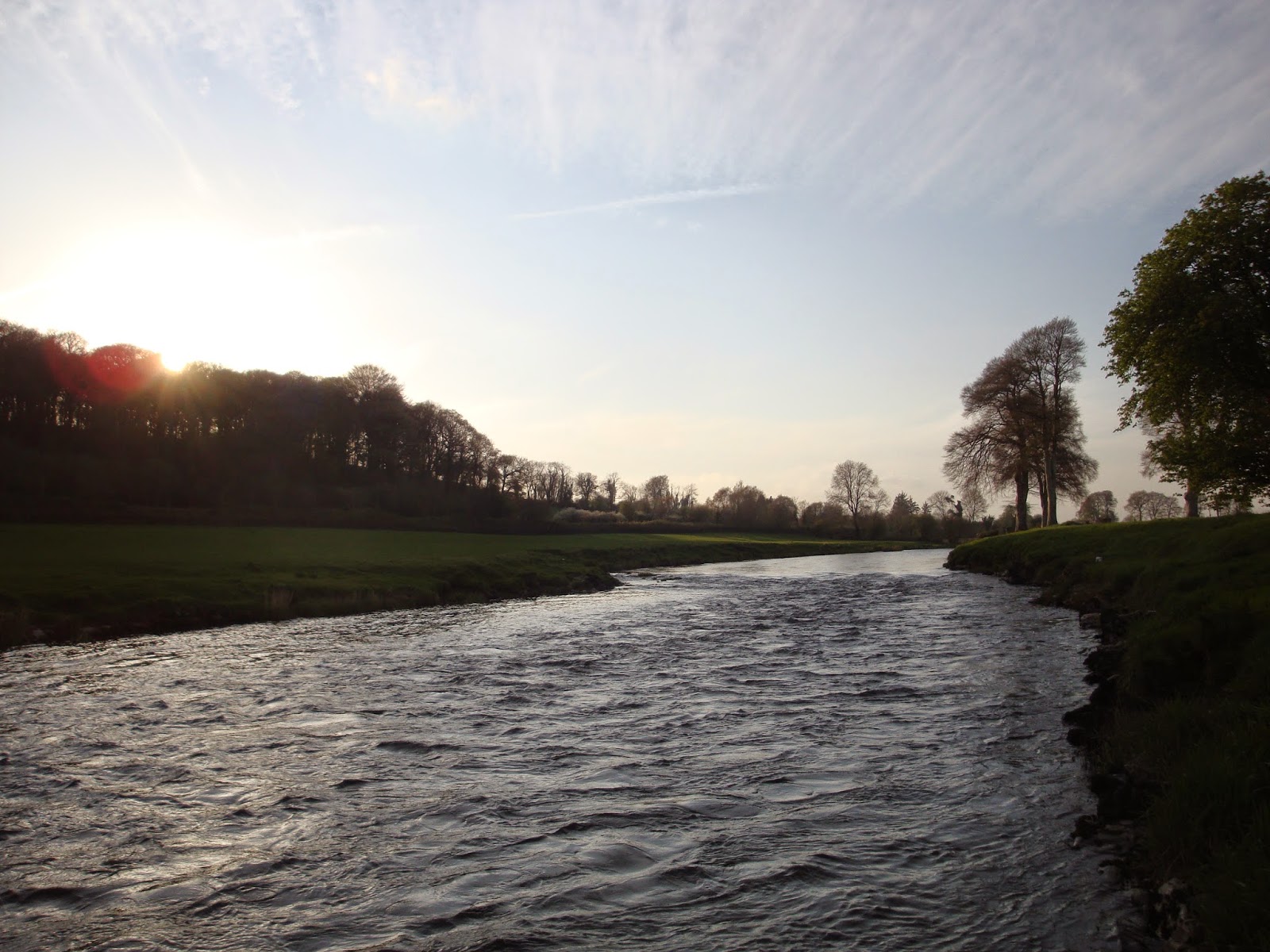 In another pool, I saw a fish move and when I covered it I got another good take which didnt stick. By the time I got down to Simon again, he told me that he had lost another fish after a brief tussle. He encouraged me to try the Sunray in the place he had lost the two fish. Just as light was beginning to fade, I hooked into a fish on the Sunray exactly where Simon had lost his fish! The first fish of the year is always a nervy battle despite Simon’s assurances that the fish was well hooked in the scissors. The Slaney is open for catch and release only so barbless singles are the rule. Thankfully, the hook held and I landed the fish in a quiet backwater. Success on the Sunray; a first for me! 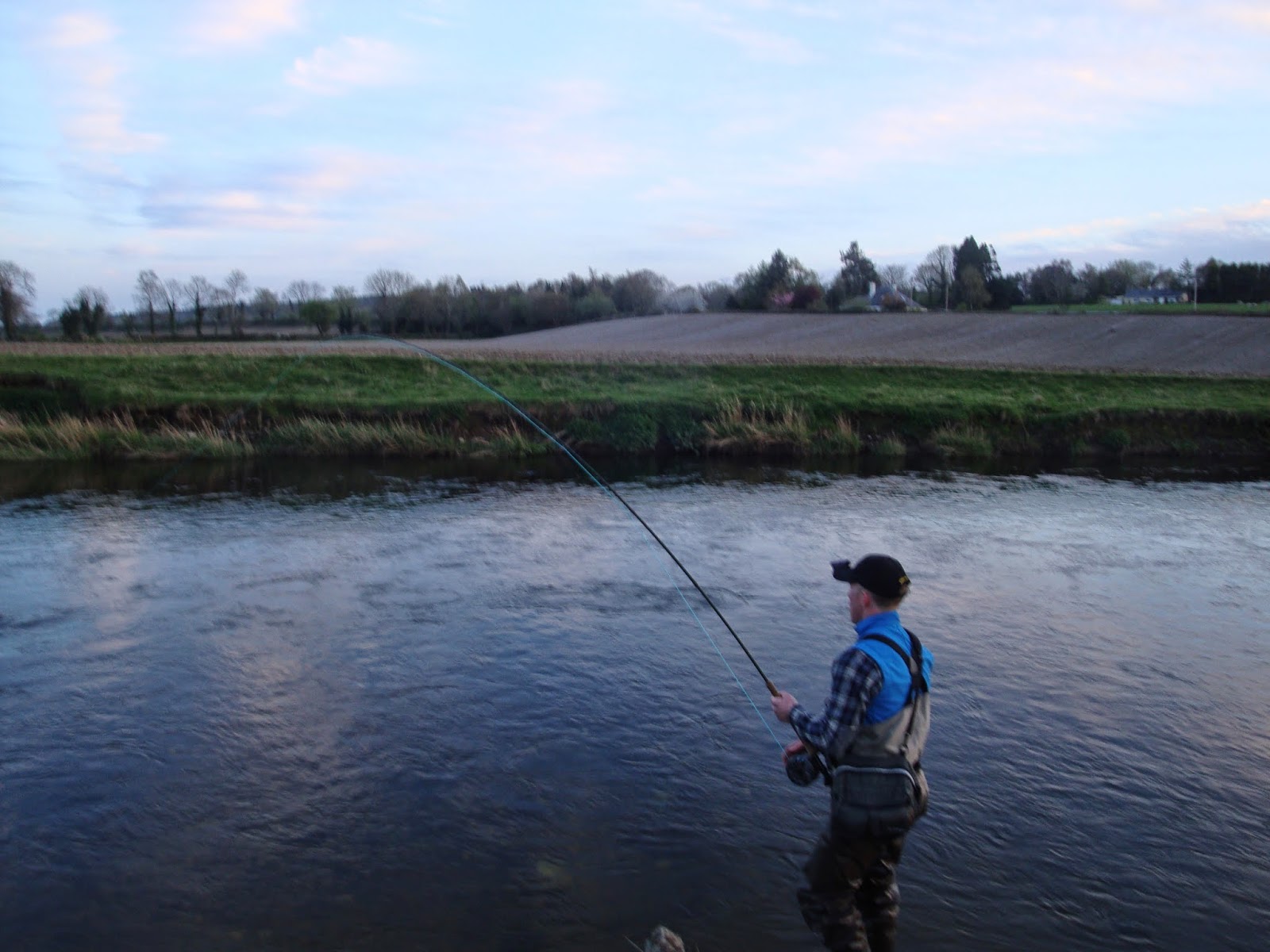 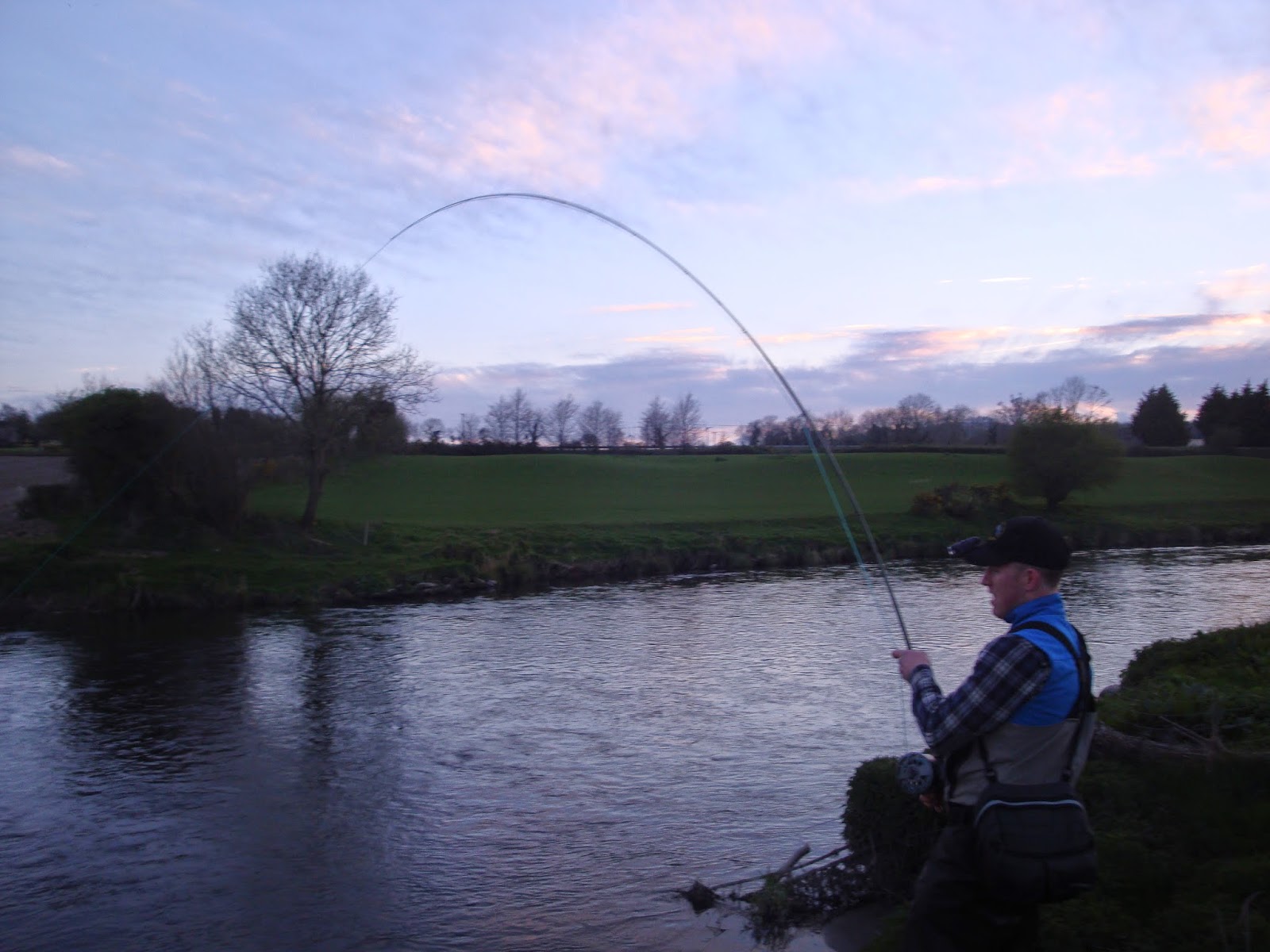 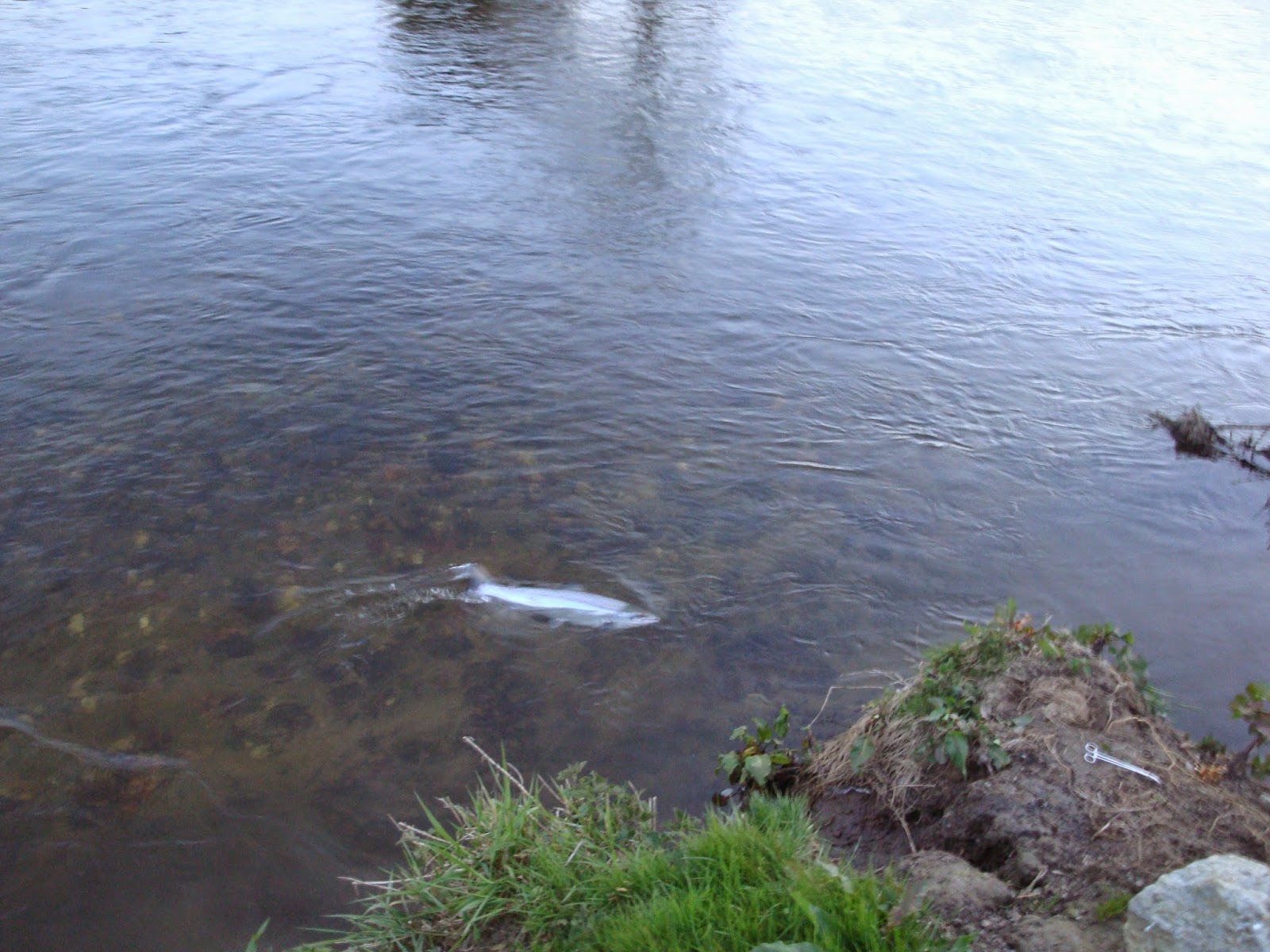 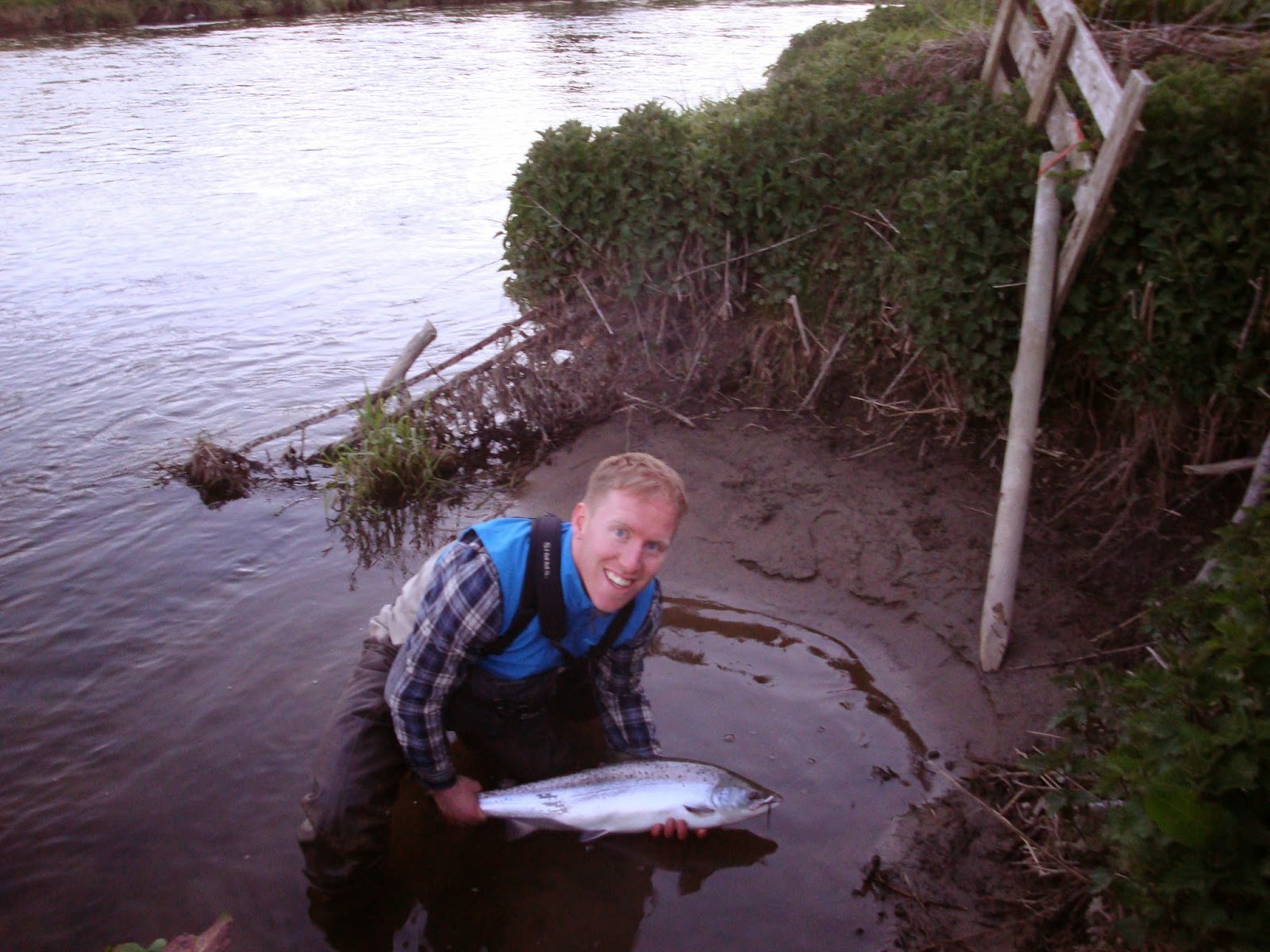 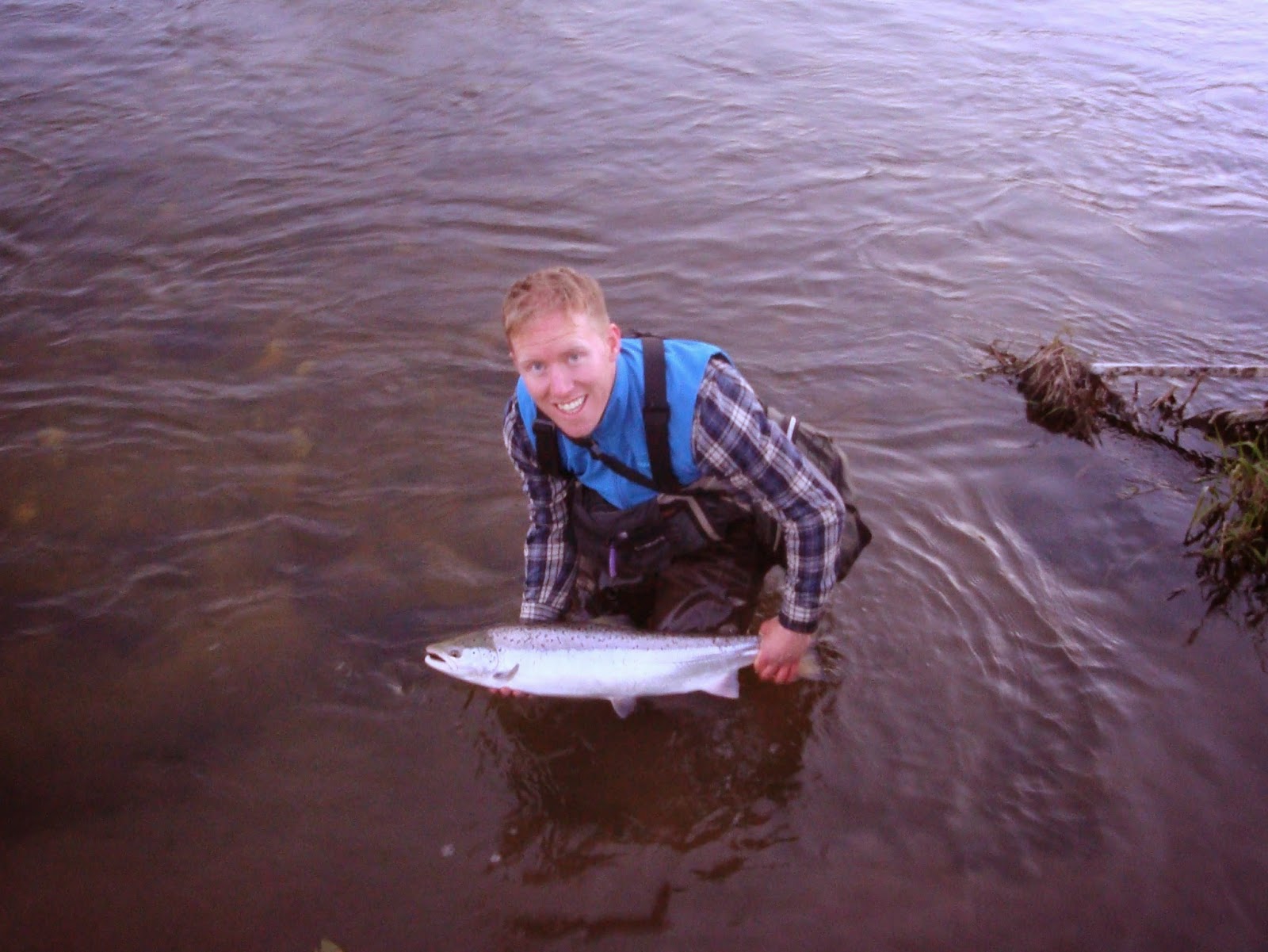 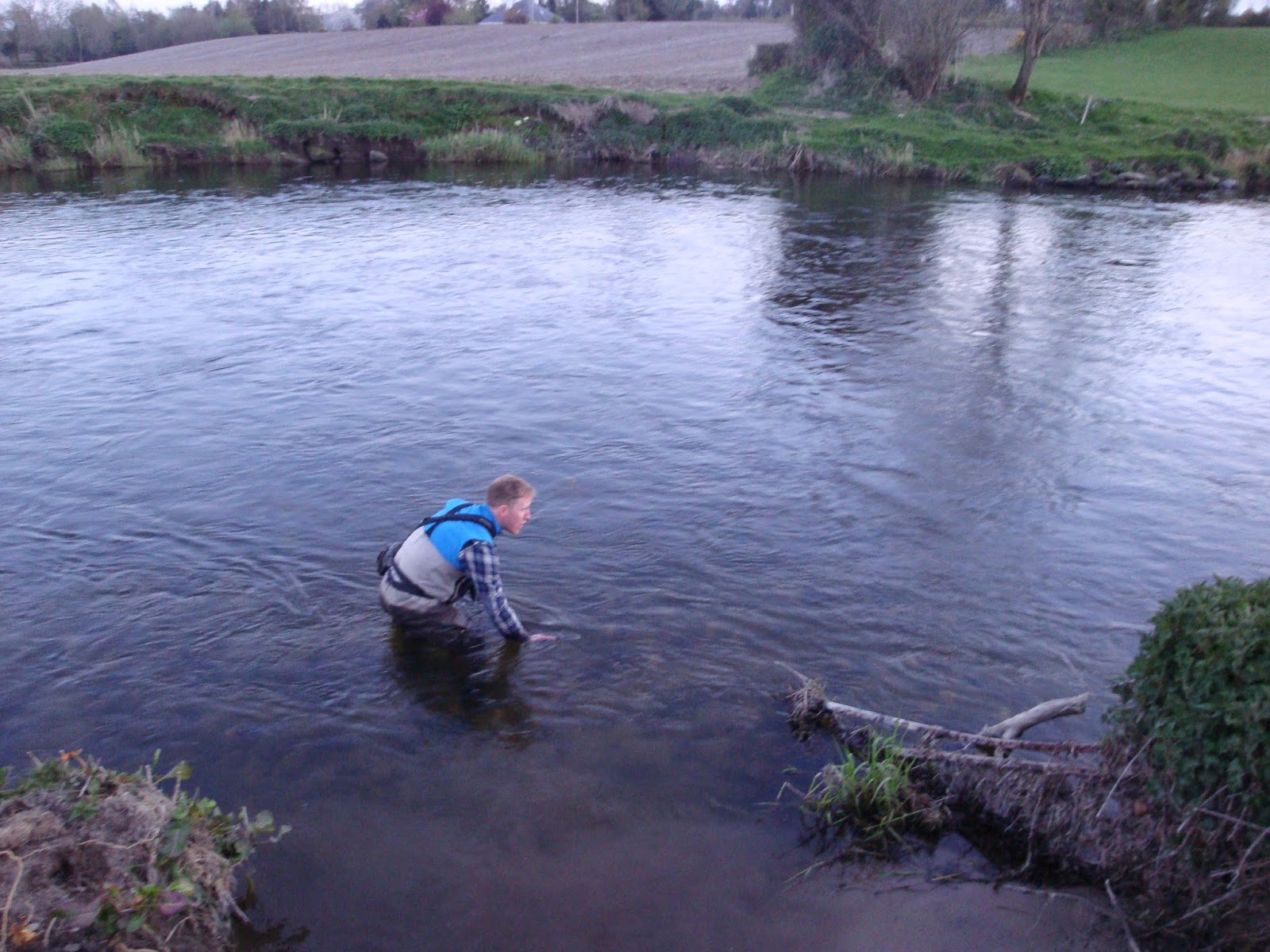 A great days salmon fishing which certainly makes up for all the blank Dee and Glyde sessions. I’d love to get back to the Slaney sometime. If not this season, perhaps next  season. A big thanks to Simon for the shout to come down and fish!


Hopefully we’ll get some rain soon and get on the Finn. The main run of springers usually arrives at the beginning of May but they won’t arrive unless there’s water, so fingers crossed!
Posted by Unknown at 01:13