September is prime time on our local rivers. Fishing can be great when suitable conditions prevail. Luckily, we had plenty of water in 2012. When the water is good, I fish as much as possible. For me, September also means it's back to work time so I only get out in the evenings, or at first light if I'm particularly keen!
The Dee and Glyde close at the end of September. This was my first season fishing these rivers and since they aren't fished much with the fly, we were faced with a blank canvas in terms of flies and tactics.
We are lucky here on the East coast because captures double figure fish aren't unusual. On the 2nd September, I hooked a big fish on the Dee. The fish head and tailed over a small conehead Park Shrimp fished on a floating head with an inty polyleader. I eventually lost the fish after a 50 minute scrap, during which the fish stayed deep and bored up and down the river. The Dee is catch and release at the minute and only barbless single hooks are permitted. I had run out of my favoured Daiichi D1648 tube singles and was forced to use a Kamasan Specimen hook. Typical that I should hook a monster. We reckoned the fish was definitely 20lb+. 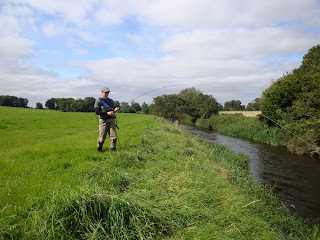 Battling the big fish on the Dee.

I concentrated on the Dee and Glyde for most of September and managed a few fish, but no monsters. 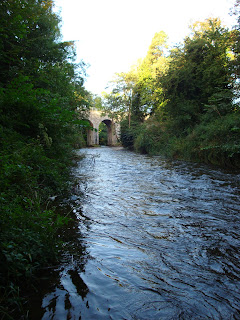 A nice run on the Dee. 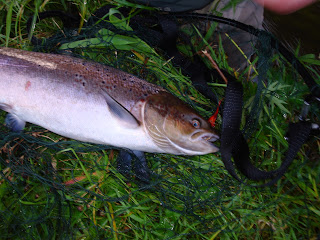 A small Fane fish taken before work one morning on a big templedog. 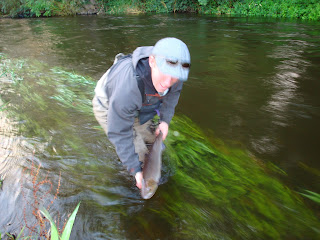