How many different fly patterns does a salmon angler need?
Over the past few seasons, it's become glaringly obvious that a few patterns have caught me most of my fish.
Every year there seems to be one particular pattern that does the most damage.
I started fishing the river Mourne about 7 years ago. At that time I used to take the Derry bus from Castleblayney, hop off at Sion Mills buy my permit and get stuck into the most fantastic fly water I had ever fished. You see, the rivers in Co. Louth are a different kettle of fish. Salmon flyfishers are very much an exception to the norm. On the Fane, where I grew up, the spinning rod still reigns supreme. I caught my first salmon on the fly when I was 11. I read an article in Trout and Salmon entitiled 'Twitching Down the Tweed'. This was meant to be a good method for the slow Tweed pools in low water conditions. The lower Fane is a bit of a canal and most anglers shrimp but I thought I'd give this twitching carry on a go! I used a nice long tailed Ally's Shrimp with a sinking line and my Dad's 9'6'' #7/8 rod which he hadn't even tried out. The pool was Craig's, a noted hotspot with a narrow pacey neck that opened into a deep dub. After an hours flogging, a lovely fresh 7lb fish must have been so thoroughly cheesed off with my 'twitching' that it decided to swallow my Ally's in pure fury. The buzz of that catch left me hopelessly addicted to salmon on the fly.
When I started fishing the Mourne regularly, I began to learn a lot more about fly fishing for salmon. I caught a few fish from the outset but it took a couple of seasons before I began to catch regularly. Five years ago, my best fly was a Bann Special shrimp. At that time I fished one on the dropper constantly, coupled with a cascade or something similar. Lo and behold, it was the Bann Special that caught, every time.
The year after, it was the Claret Shrimp that caught most of my fish. The Claret Shrimp is a beautiful fly comprising of the usual GP body feather tail, claret rear body, claret mid. hackle, dark claret front body, J.C. wings, finished with a badger hackle in front of an orange hackle.
Three years ago, I didn't get to fish as much as I would've liked. We reached the Leinster final with Louth and football committments ate into fishing time. When the water came on the Fane, templedogs and the big water maestro, the Snaelda worked well. 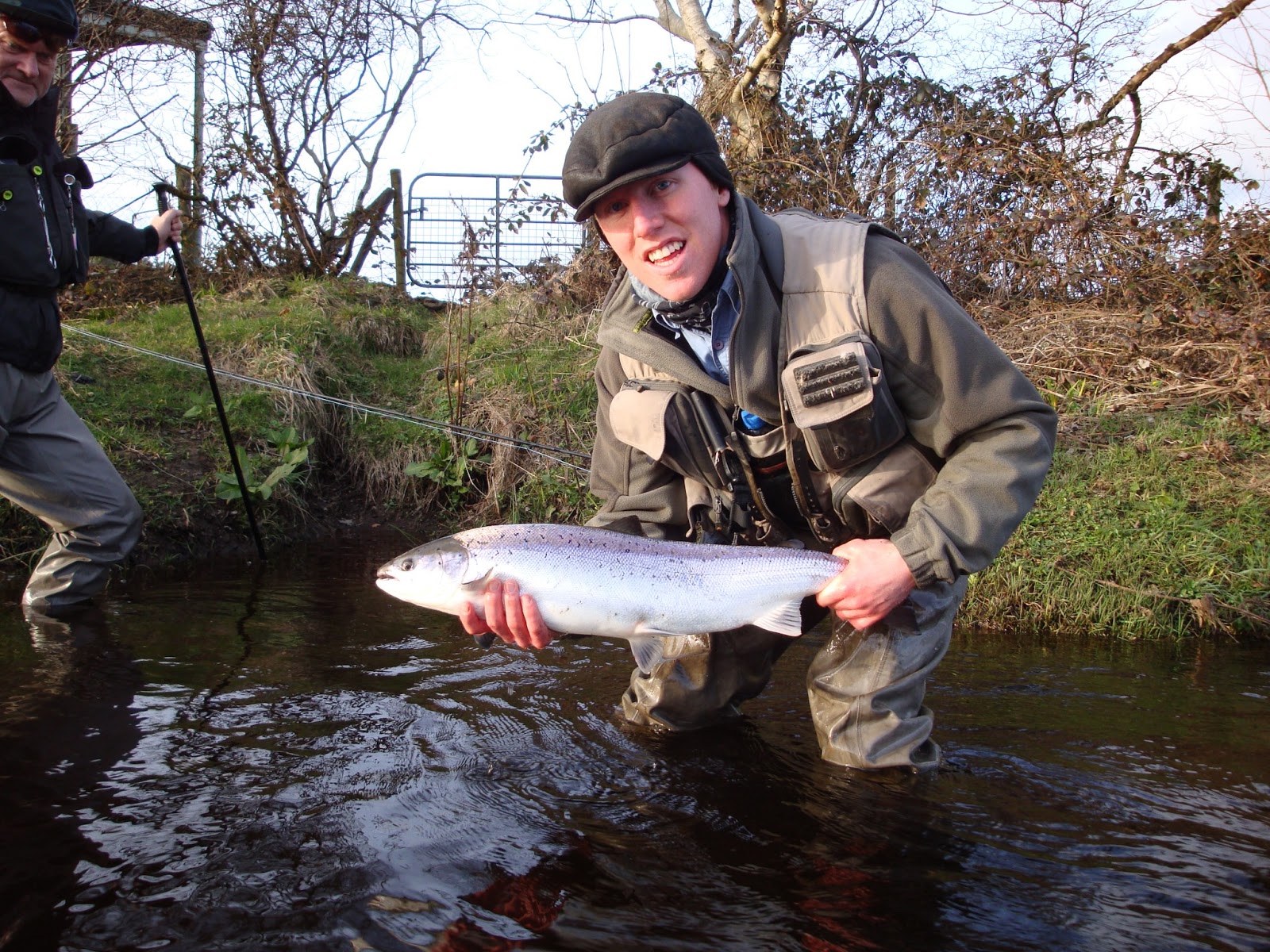 First springer of 2010 fell to a Snaelda.
In 2011, I discovered the Red Frances. What a fly!
I used it extensively on the Finn to great success. My tactic was to cast it square and twitch it fast through the pool. It was deadly. I tied the Frances on #10 and #12 Kamasan B175s for 1'6'' and lower, and had a small conehead version for big water. The conehead caught me loads of fish including my first Dee fish this year and a big Glyde double which I lost. The conehead eventually broke off and I retired the Mach 1 Frances! 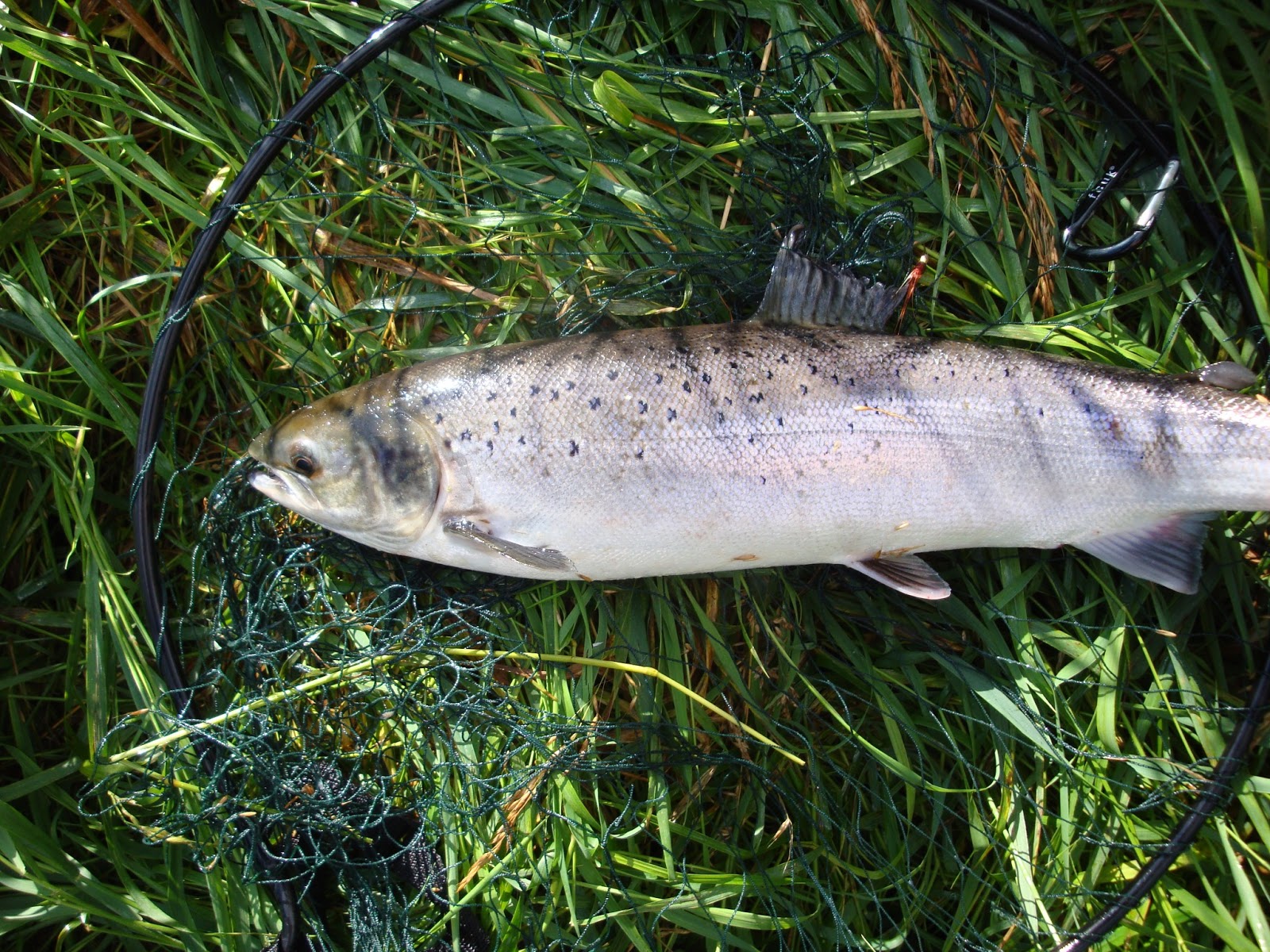 The Dee fish that fell to the lethal conehead Red Frances.
Note the fly sitting beside the dorsal fin.

Last year however, I caught most of my fish on a Park Shrimp. If you test out a well tied Park Shrimp in the river before you fish it, the first thing you'll notice is the seductive, sinuous quiver the tail makes. The Park Shrimp looks unreal in the water and simply inspires confidence, Needless to say, I've already tied up a few Parkies for 2013. 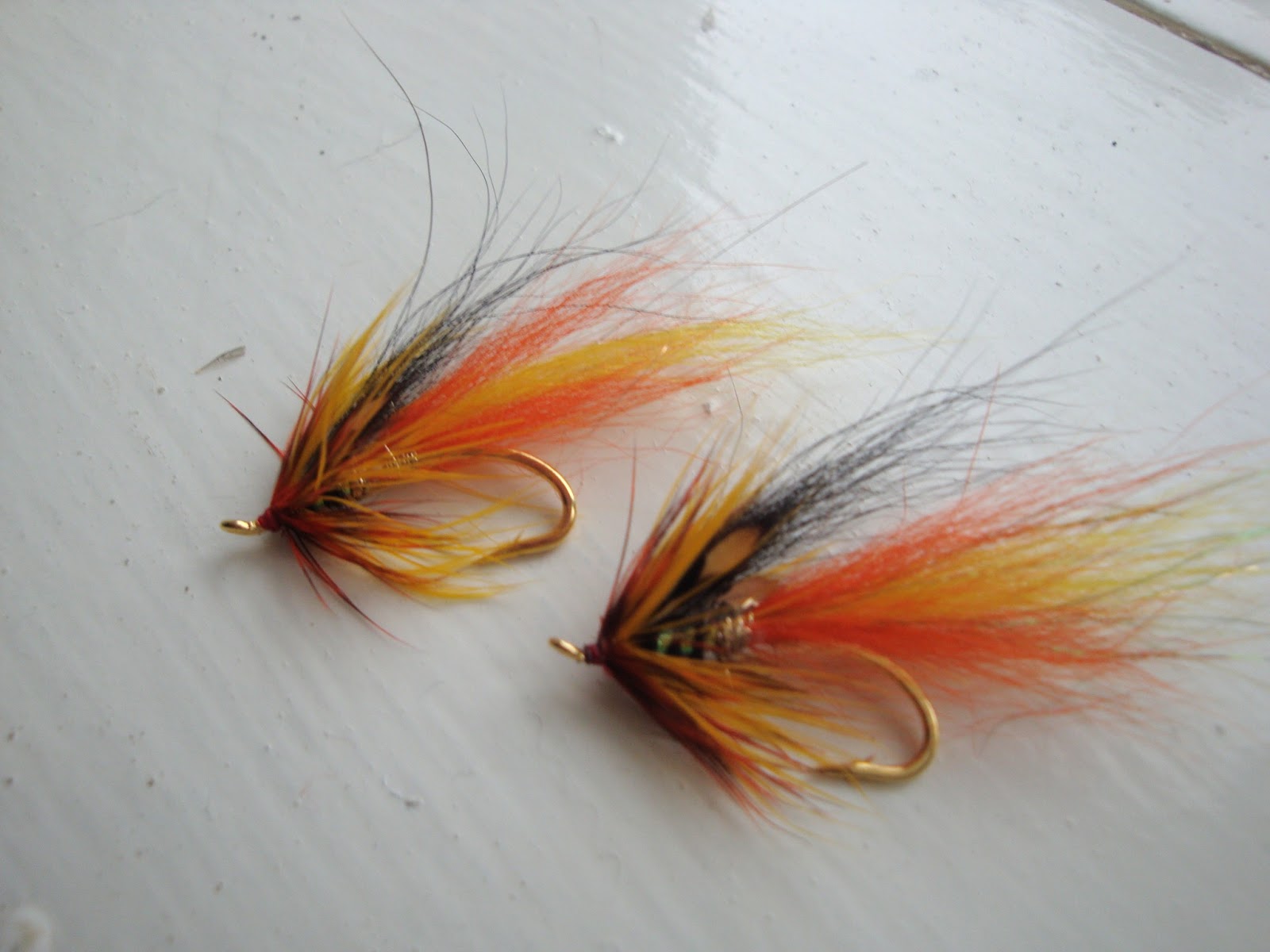 Irish shrimp flies are great patterns to have. I caught my first ever springer on a Silver Wilkinson, so I'm ting up plenty of those. The Bann Special will be present in decent numbers this season. I've included plenty of Curry's Reds because I intend fishing the Lackagh regularly this spring and a few people have told me it's great up there. The duo of badger hackles adds a lovely transclucency to this pattern, which is possibly the reason for its effectiveness on the clear waters of the Lackagh.
I've caught plenty of fish on a Faughan Shrimp in the past few seasons, enough to warrant inclusion in the 2013 line up. I'm using foxytails american softhackle in orange for the middle hackle.
Currently I'm at the halfway stage of tying. I think I'm gonna need to get a new J.C. cape before I finish but I've included a few snaps of the initial tyings. 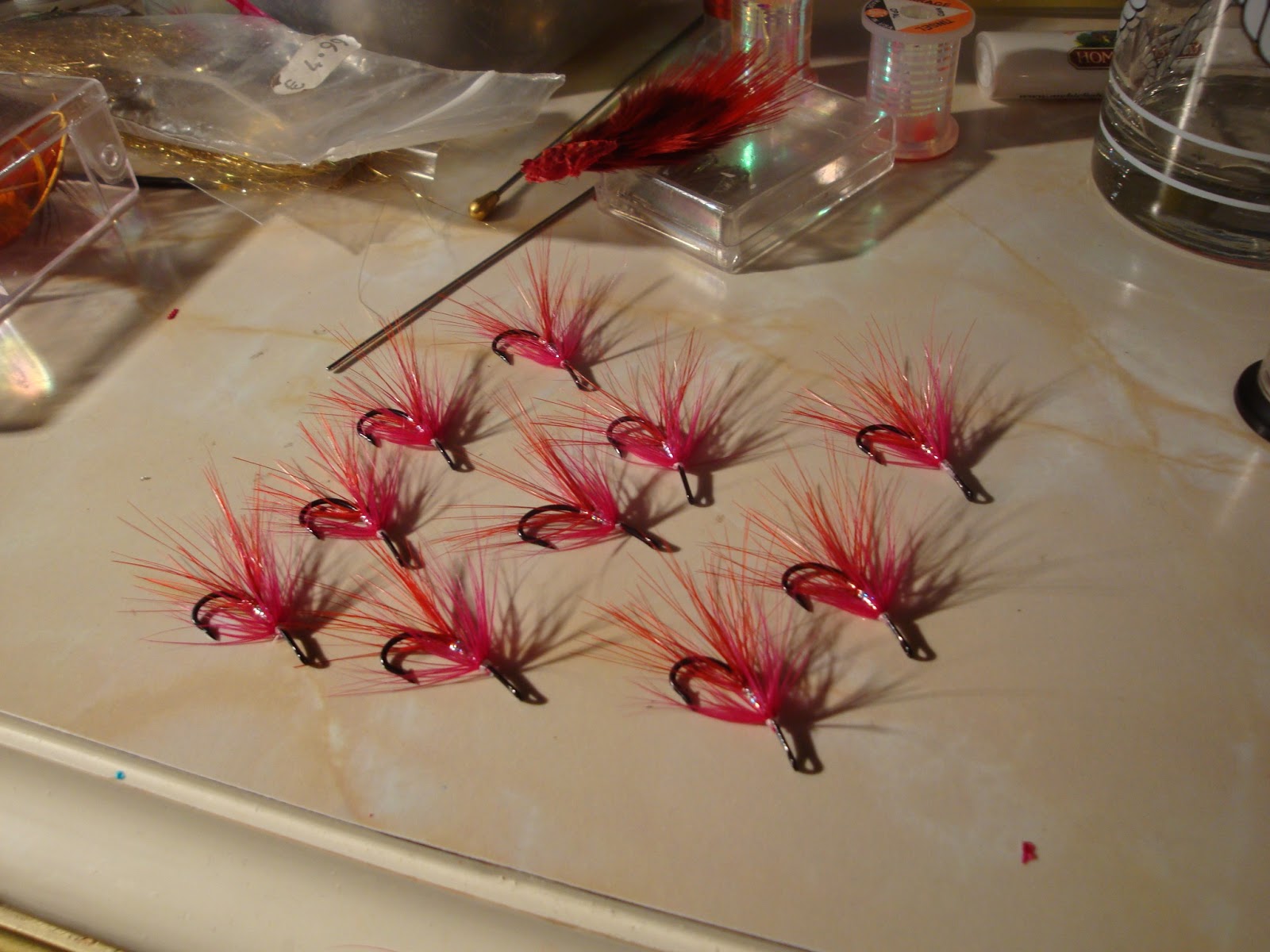 Silver Wilkies at the halfway stage. 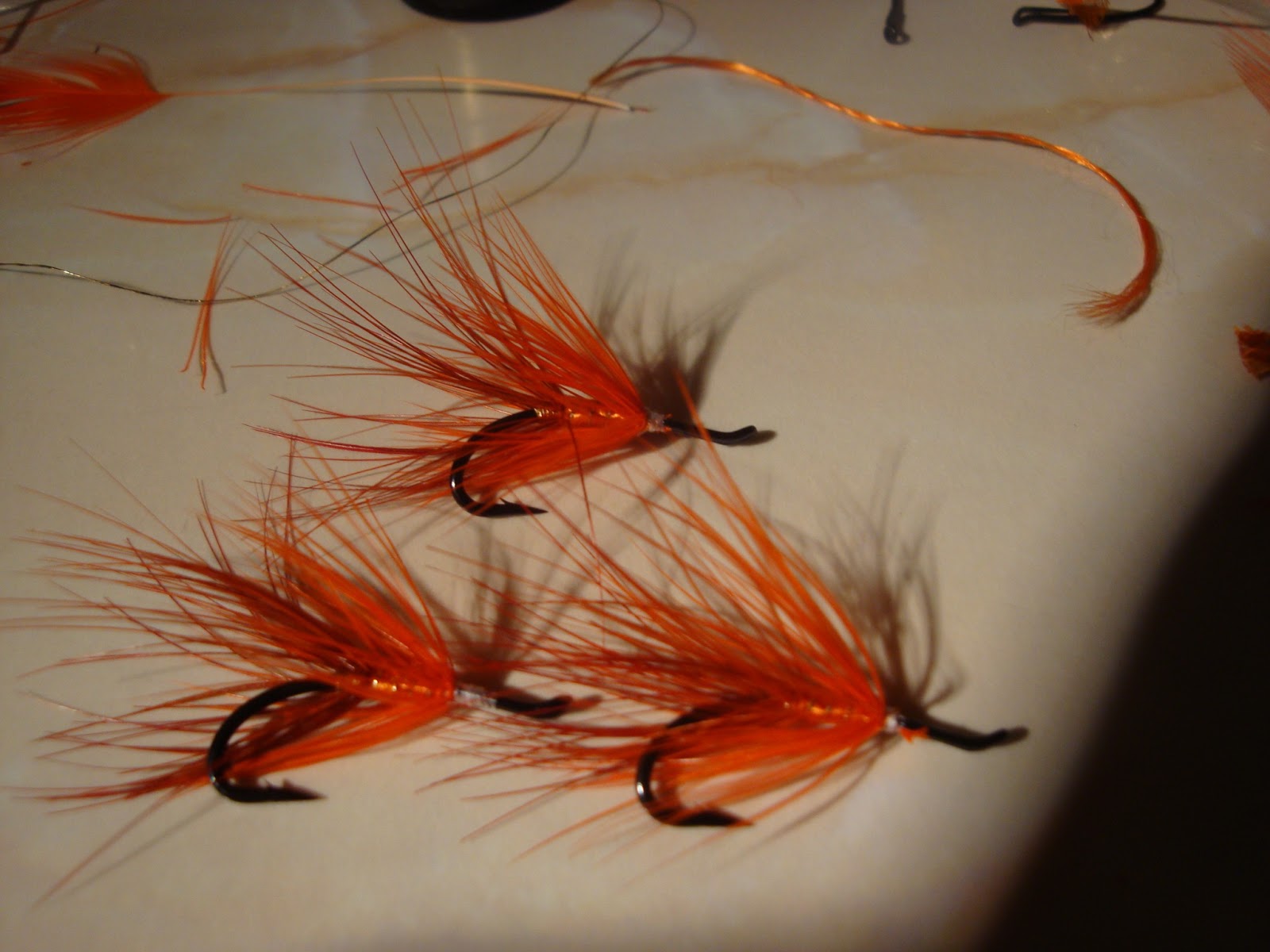 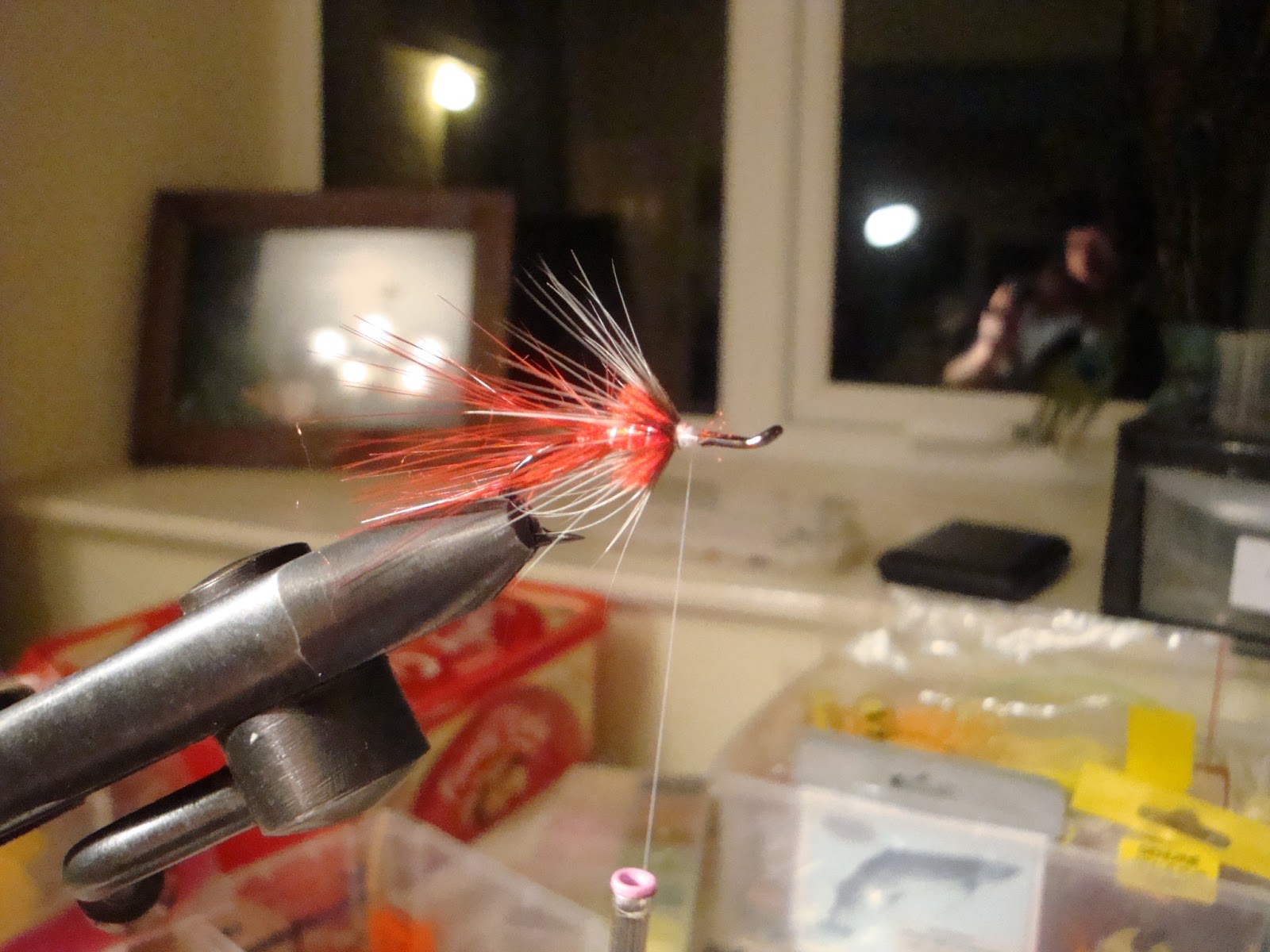 Working at a Curry's Red. 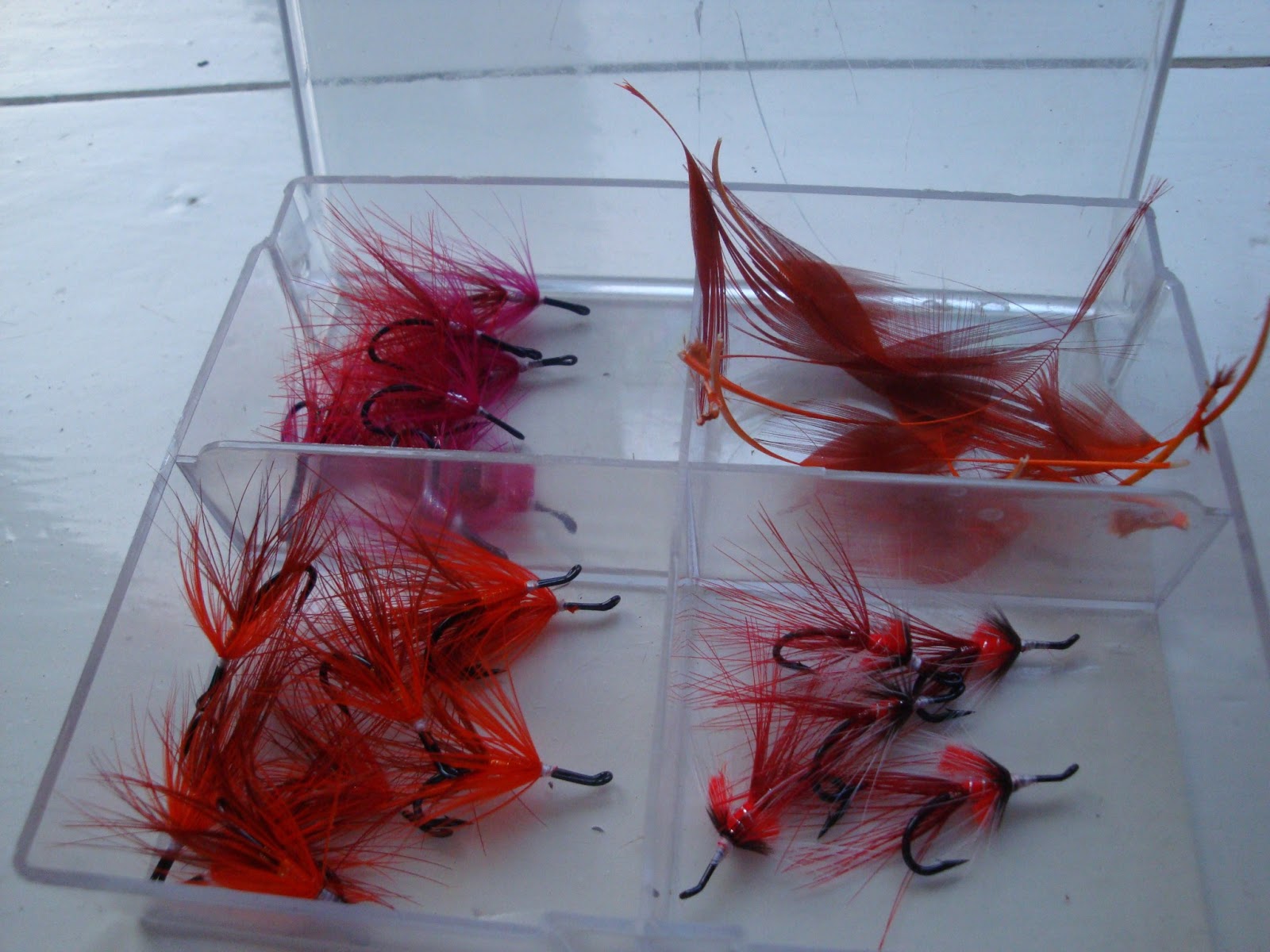 Nearly ready for the final stage.