A day on the Drowes.

Myself and James gave the Drowes a throw yesterday. It was a grey, miserable day with the air temperature still hovering around the 10 degree mark. The Drowes had a much fishier feel to it than the Lackagh but this was probably due to the fact that it was full of kelts. They were splashing around in all the pools. I've fished the Drowes a right few times in January but this is most amount of kelts I've seen in the river at this time of year. There were also fish still spawning on the redds around the eel weir. I'm no scientist, but I reckon the unseasonably mild weather must be having effect on  things. James mentioned that he had heard reports of frogspawn being spotted down in Cork. Crazy stuff! Nature hasn't a clue what's going on.
We purchased our permits at the fishery office in Lareen and headed for Lennox's Bridge. Surprisingly, there were no other cars parked so we decided to start at Briney's which is upstream from the bridge. I must admit, at this point, that I've never had a fish off the Drowes it's a real bogey river for me. I've heard it said however that Briney's is a good throw. It has a great pull on it for the fly. And there is a section from the whin bush on the far side to the tail that looks deadly. 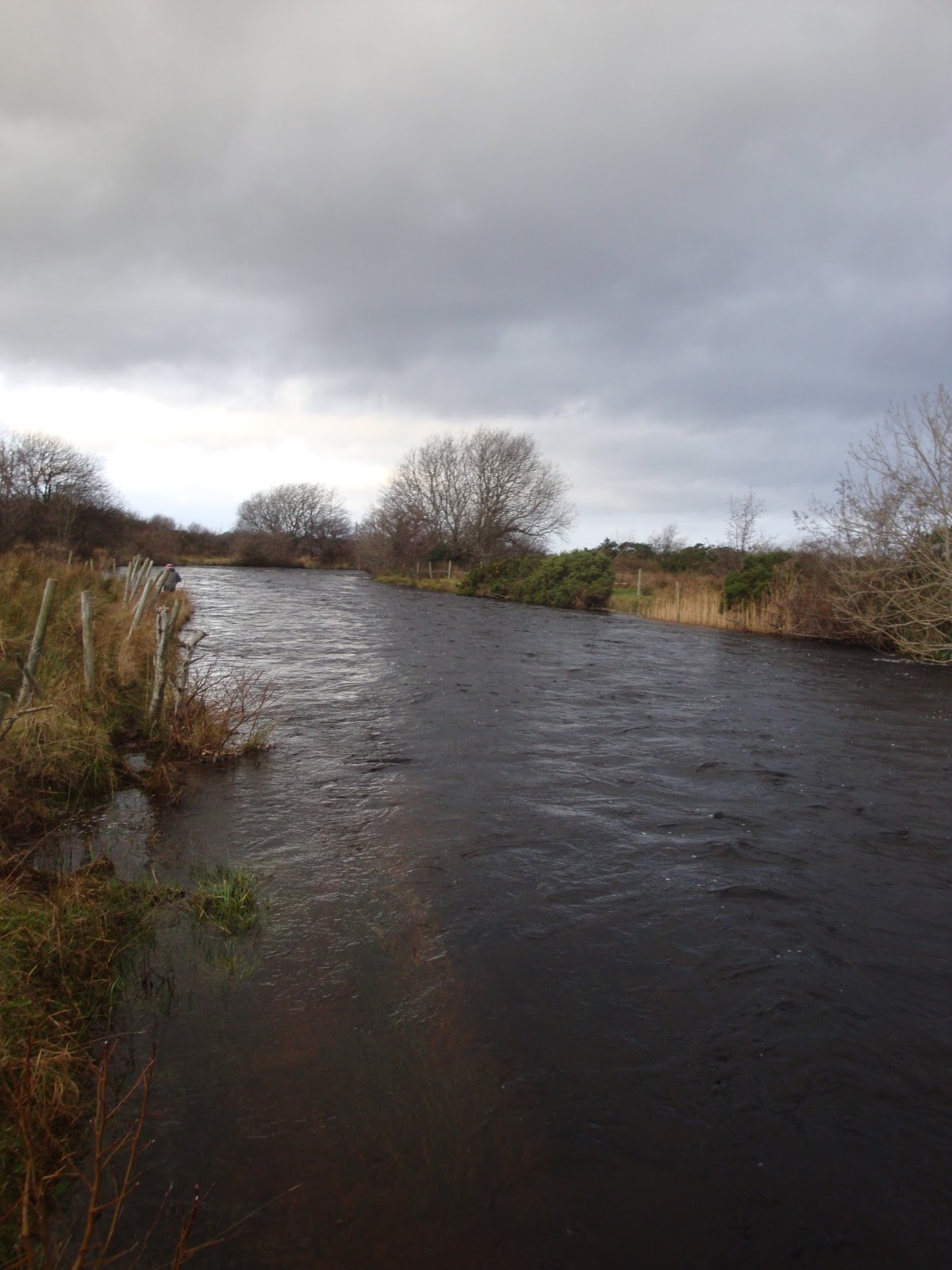 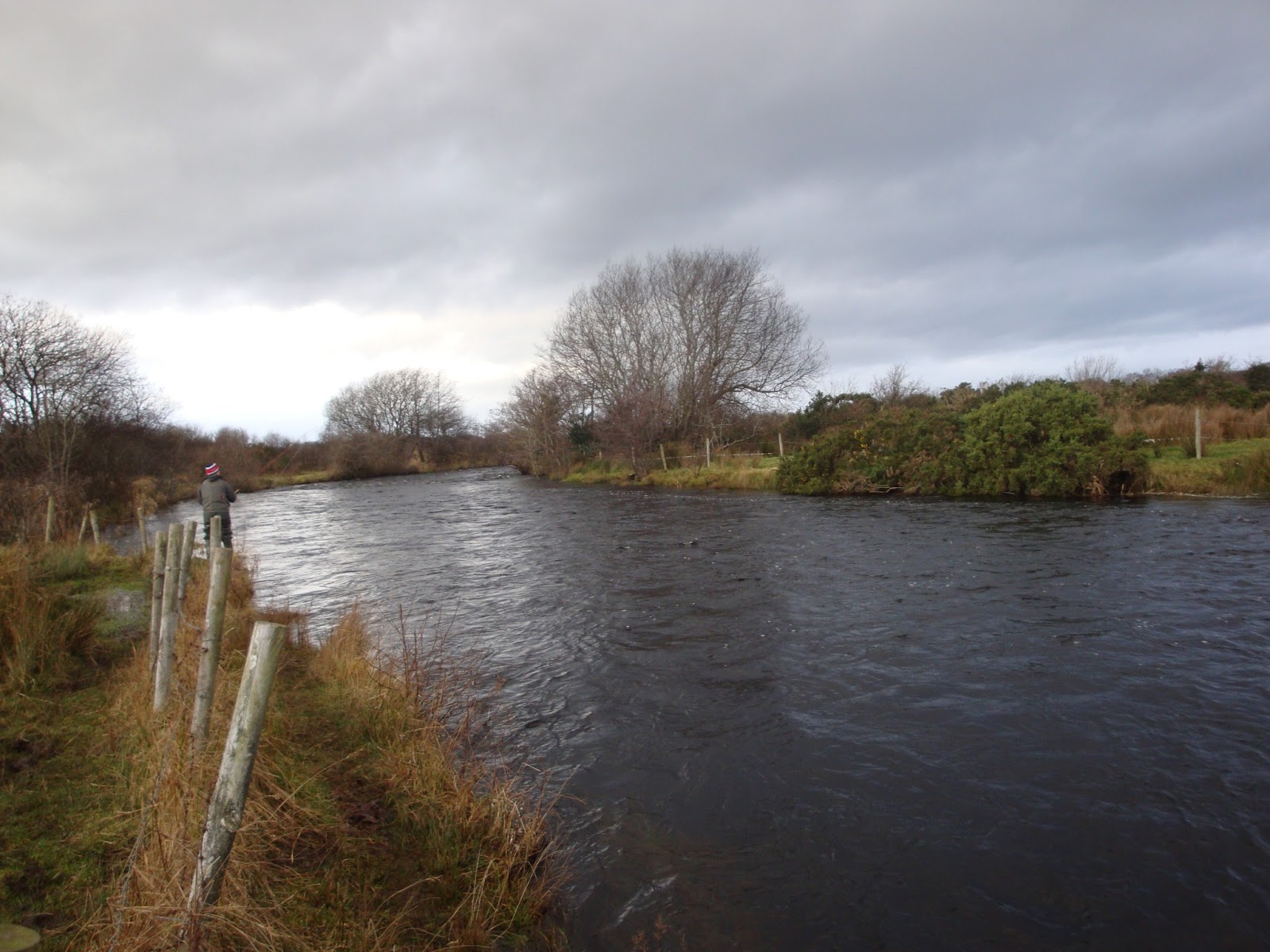 Briney's was full of  kelts. We must have counted about ten of them splashing around. No pulls though.
Next up was Lennox's bridge pool. Again, plenty of kelts showing but no chromers. 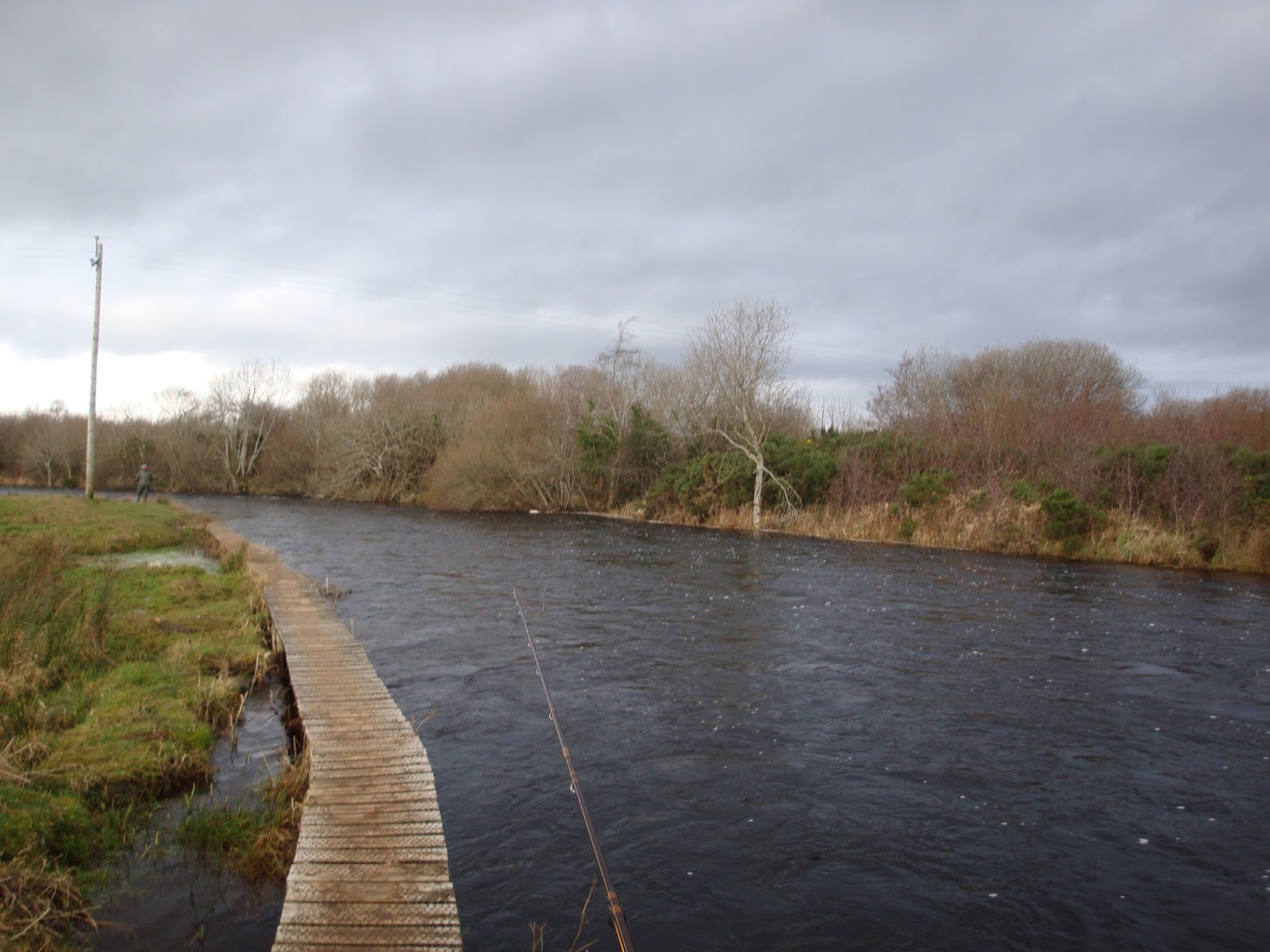 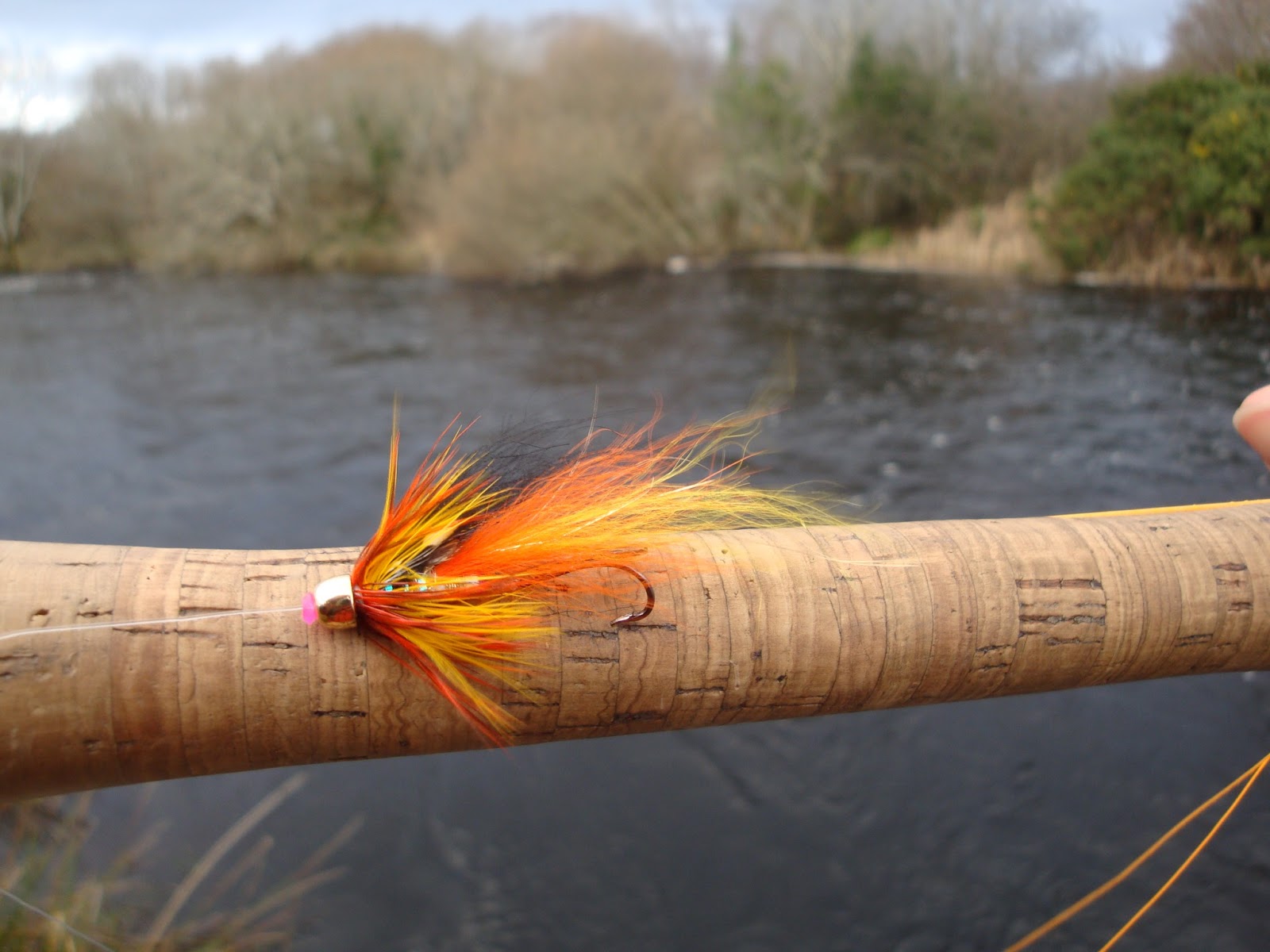 A Conehead Parkie was on the menu for the day.

We fished two or three more pools on this section before heading up to the top section at Lareen. We stopped off at the Mill Pool where a fresh fish was reportedly lost on Thursday. I usually only fish the Drowes in January, simply because it can get a bit busy. I have also found that the usual salmon fishing etiquette of cast and step from the top of a pool downstream doesn't apply to the Drowes. Be prepared for anglers to start from below you and fish upstream and leap frogging is also a  popular pursuit. Lo and behold,  just as we were getting to the tail of the pool, another angler appeared and began worming where we were just about to cast. Very infuriating, but that's just the way it is on the Drowes. I just bit my tongue and made for the jeep.
The upper section of the Drowes where it leaves Lough Melvin is really nice fly water. We began at the Eel Weir and worked our way down to the Crooked Hole, just above the Mill Pool. We bumped into an old mate Simon at the Blackwater. Simon, who will travel anywhere in the country for a chance of a salmon, is just back from a trip down under and had plenty of tales of big New Zealand trout and Chinook salmon.
The Blackwater regularly produces springers and at the bottom of the pool the line tightened and a fish was on. It was pretty obvious however that this was no springer though and after a brief scrap, I unhooked a kelt that was in poor condition with a fair amount of fungus around the head. 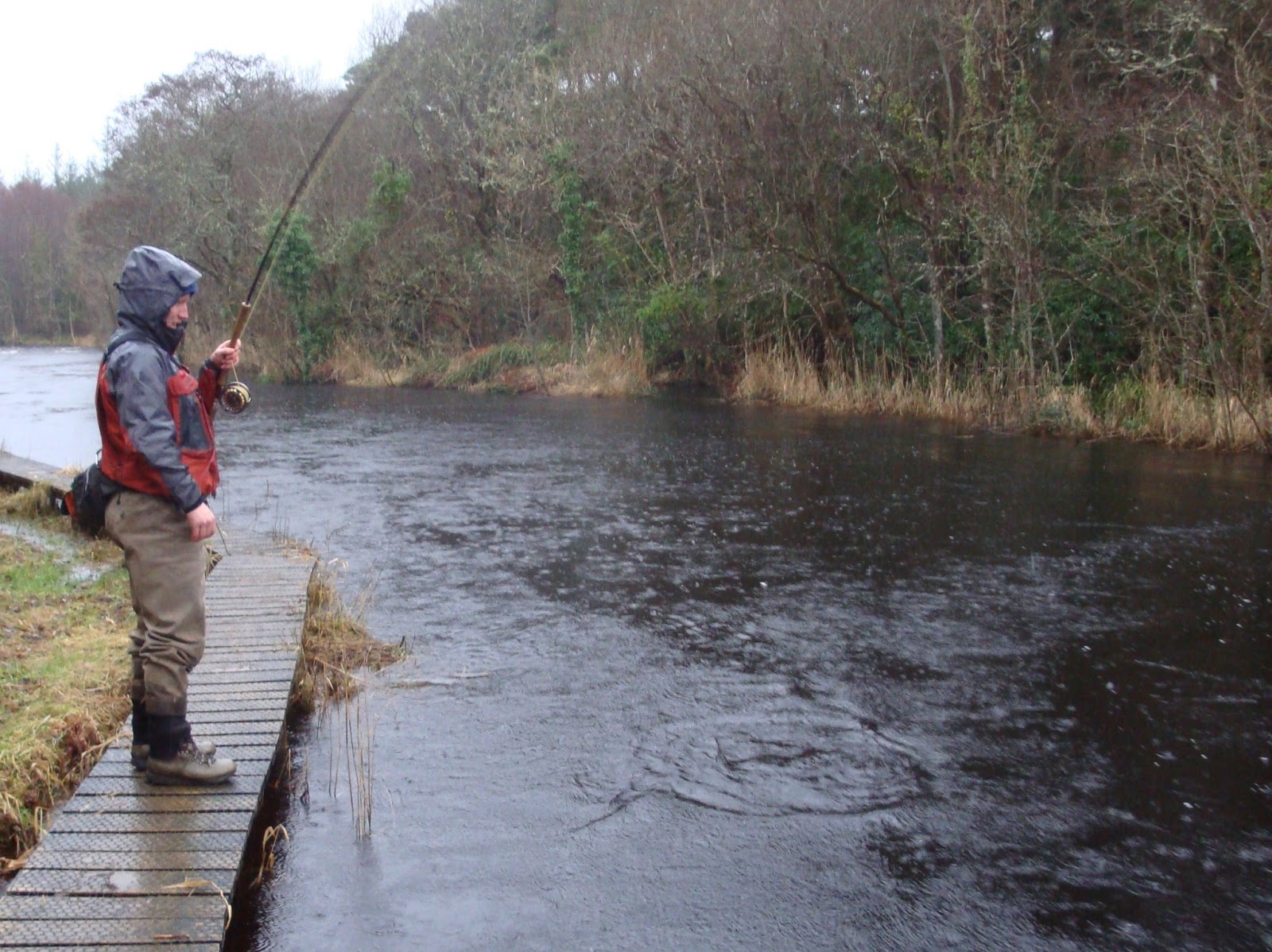 Kit for the day was my Orvis 11' #8 Access Switch with a Rio Scandi-Short Versitip, 480grain head. This outfit was perfect for the Drowes. The wooden walkways that run along the left bank of the river mean that double speys and snake rolls that are necessary in a downstream wind can be tricky and the fly often ends up stuck in the walkways.The 480 grain head loads the #8 Access Switch deeply and is ideal when you don't have much space to form a 'D' loop. It absolutely flies out, and covers all water on the Drowes. I used the fastest sinking tip along with a short leader and the conehead Parkie. Luckily most of the other anglers were concentrating on the blackwater so it was enjoyable fishing down through the uncrowded streams. 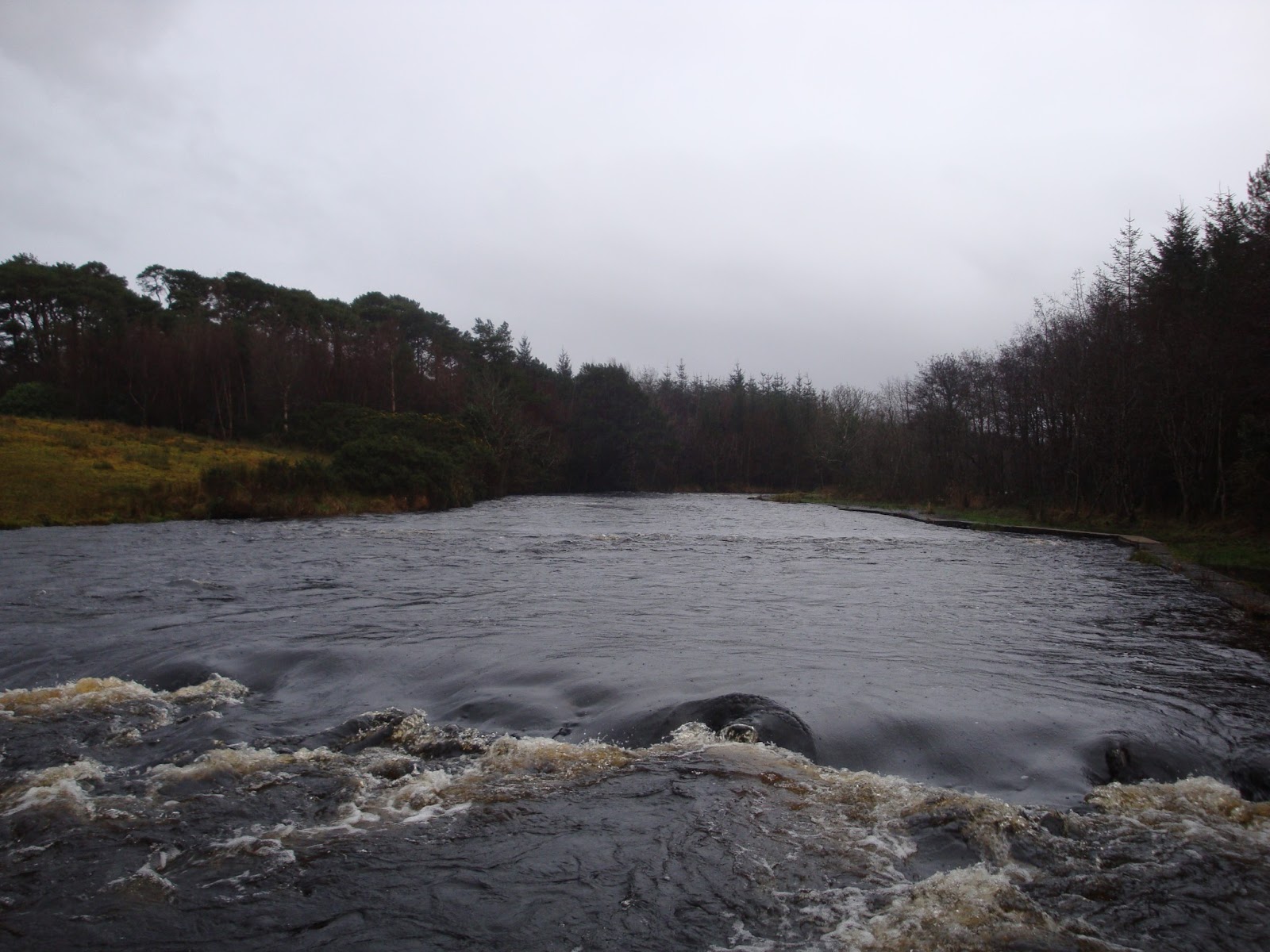 Lovely fly water on the Drowes.

After lunch we tried the top pools where the river flows out of Lough Melvin and worked our way down to the Blackwater where there were plenty of other anglers fishing so we moved back down to Lennox's where we finished off the day at the bridge pool... fishless.
There's talk of a cold snap heading our way later in the week and I think it will be more than welcome. Presently, I think I'll leave it for a fortnight or so before I head out again. It's back to work tomorrow however and there's a good chance that I'll have a notion to get out again next weekend.
To finish up, here are a few more snaps of the Drowes: 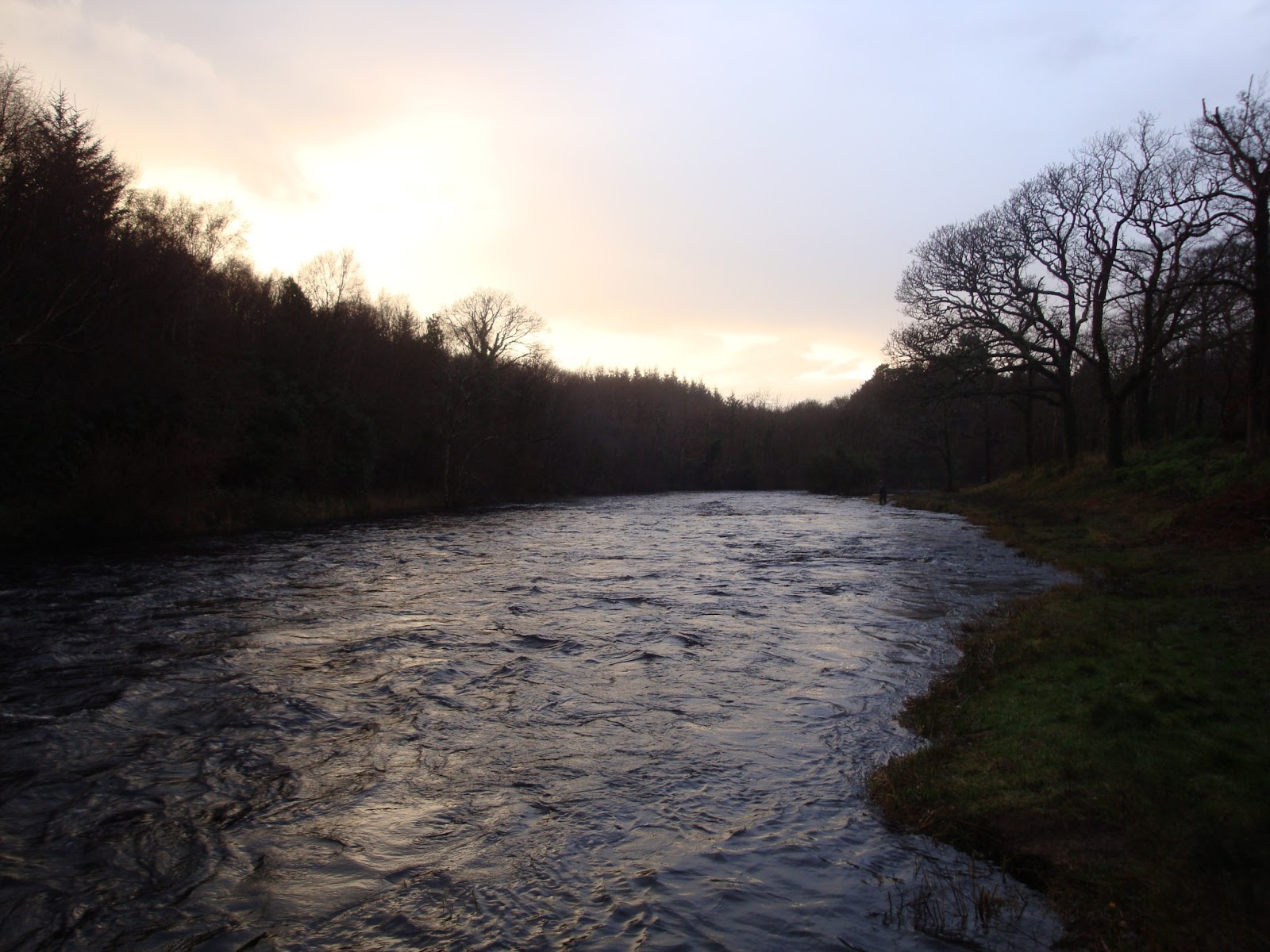 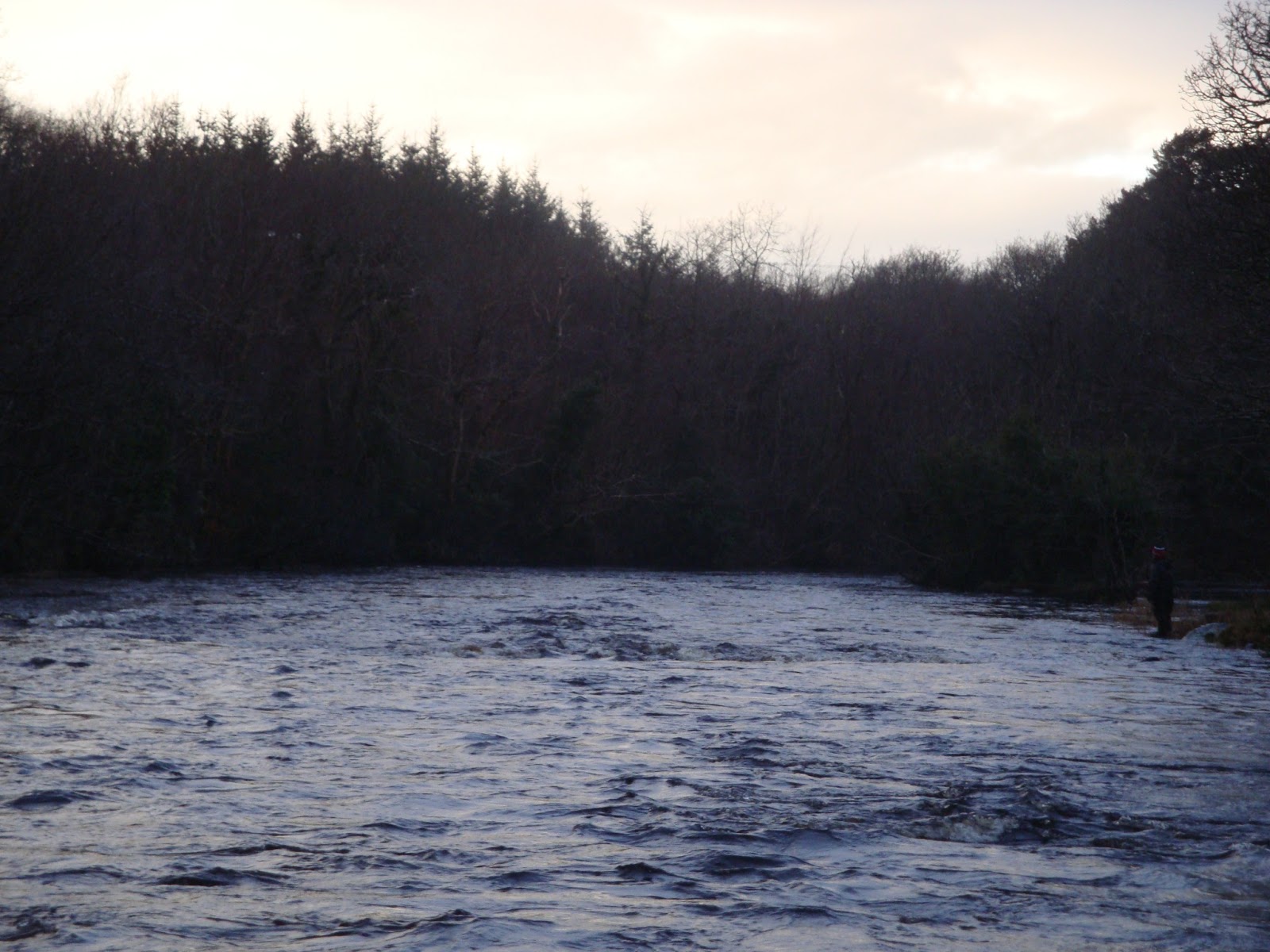 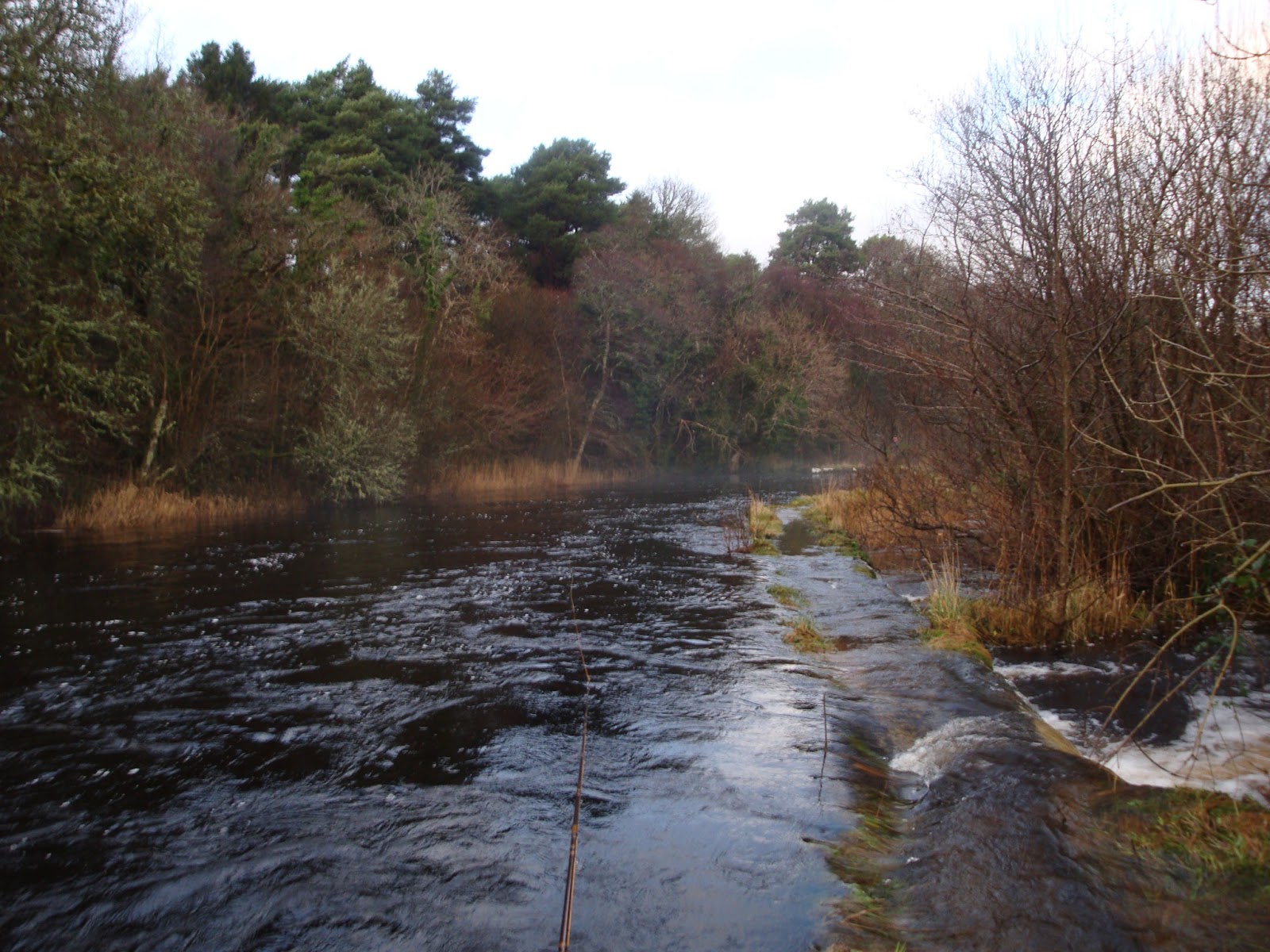 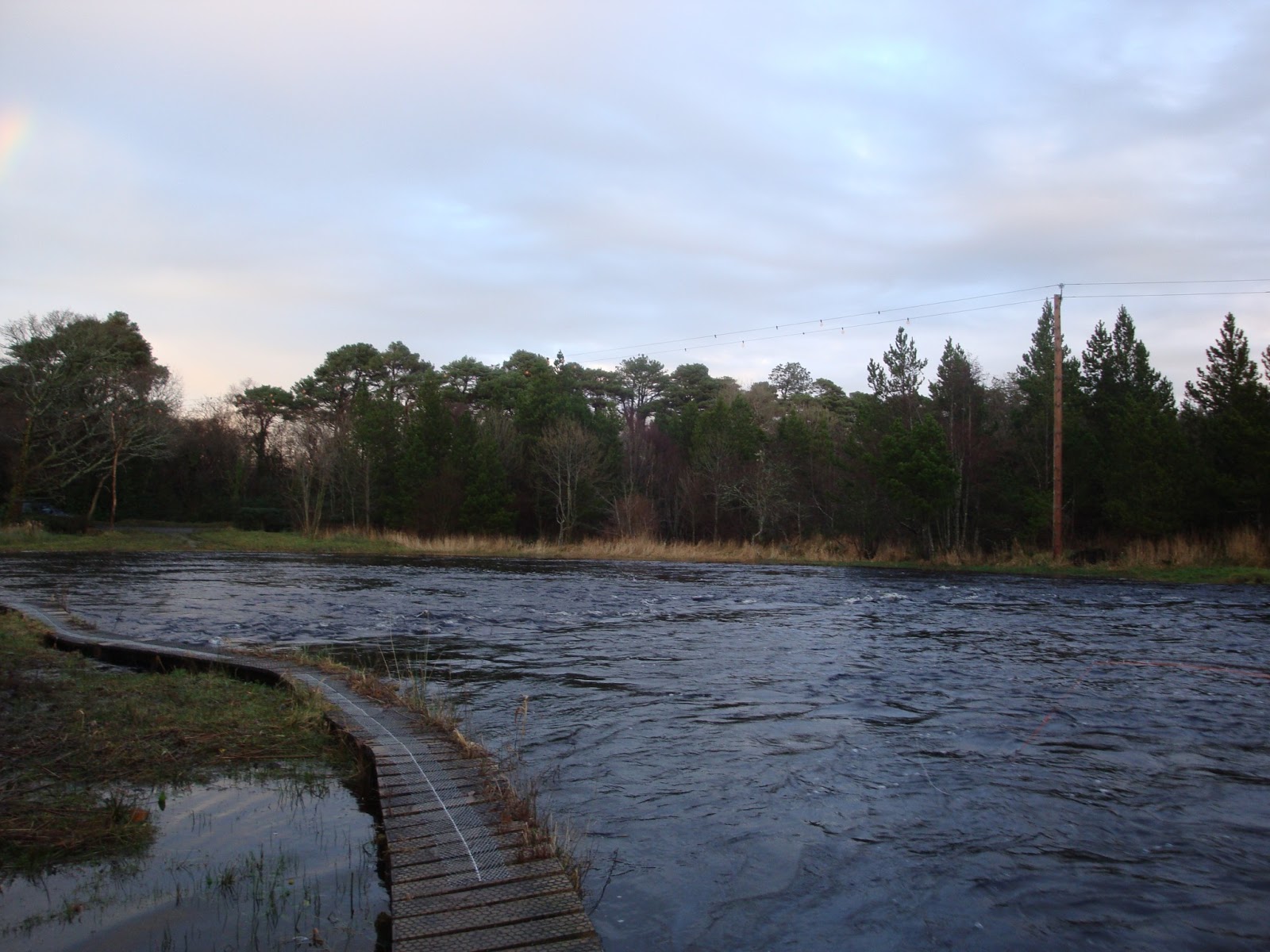 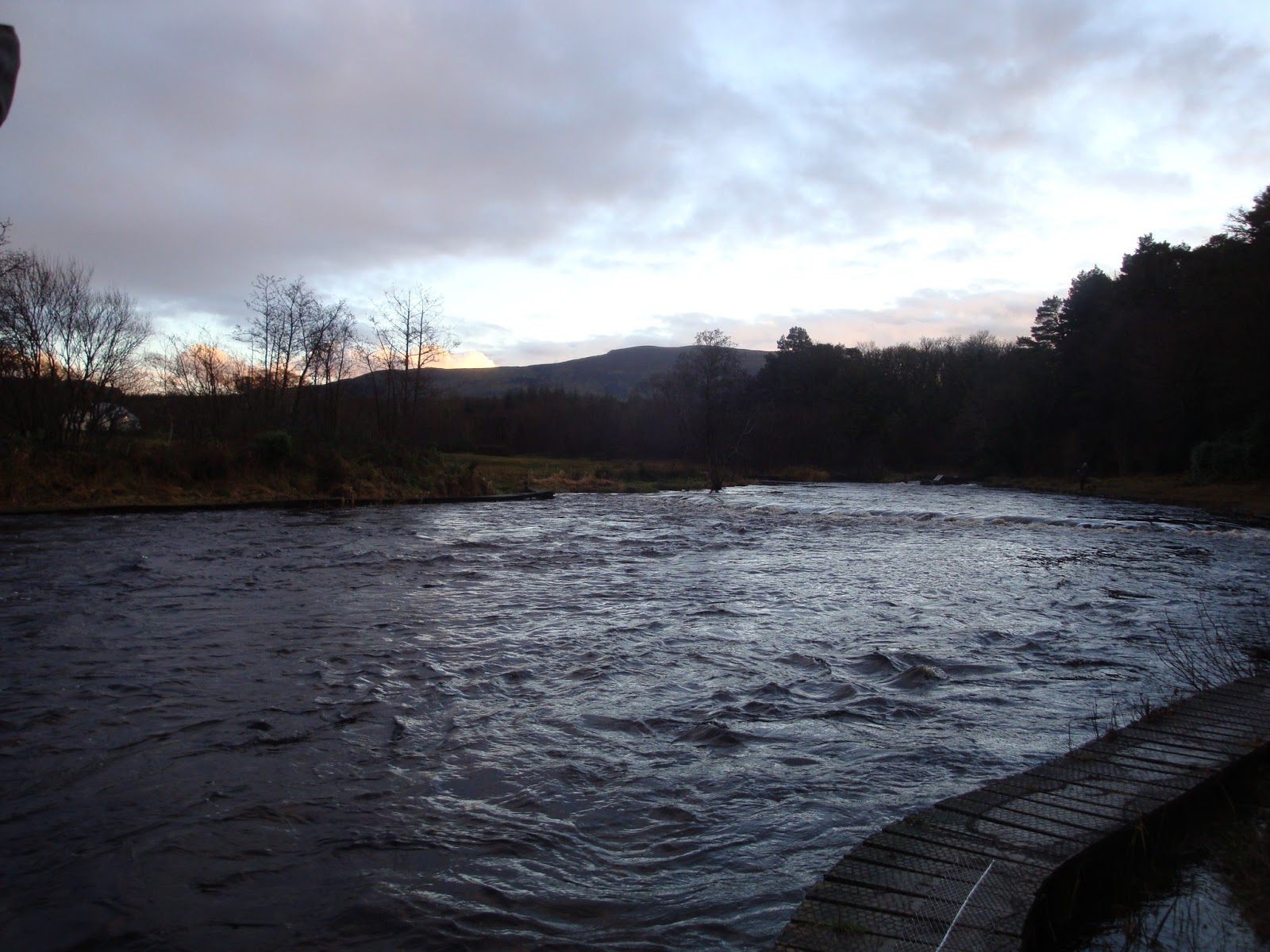