May Salmon on the Finn.

I managed another couple of Finn springers on Saturday 11th May. There was rain forecast for Friday night and luckily I had booked a morning session on the Ivy Bridge beat so I decided to leave Louth on Friday evening and do an all nighter in the jeep so I could hit the river at first light. I awoke at 5 am to the sound of strong wind and heavy rain so I got straight down to the river knowing that it wouldn't be long before it began to rise. I started at the Graveyard Pool and fished it through with a conehead Park Shrimp without a touch despite the fact that there were quite a few fish showing. A change of tactics was in order so I  attatched  a 10' super-fast sink poly leader to my 8/9 AFS and put on a conehead Red Frances tube. I cast a bit squarer and allowed the Frances to sink before jigging the fly quickly through the pool. I was feeling confident and wasn't all that surprised when the line tightened at the sweet spot in the pool. Five minutes later, I landed a good deep springer of about 8/9lb. 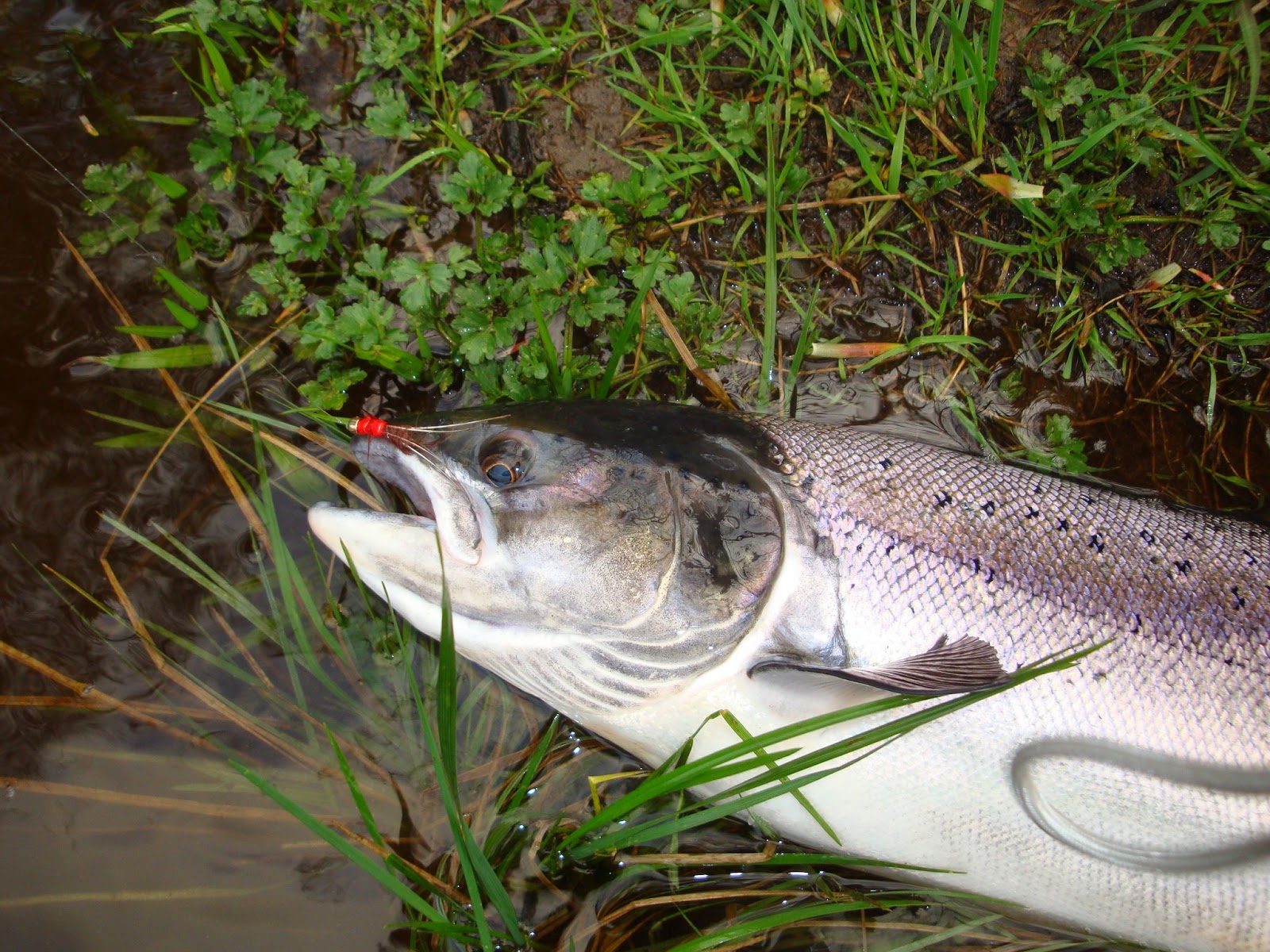 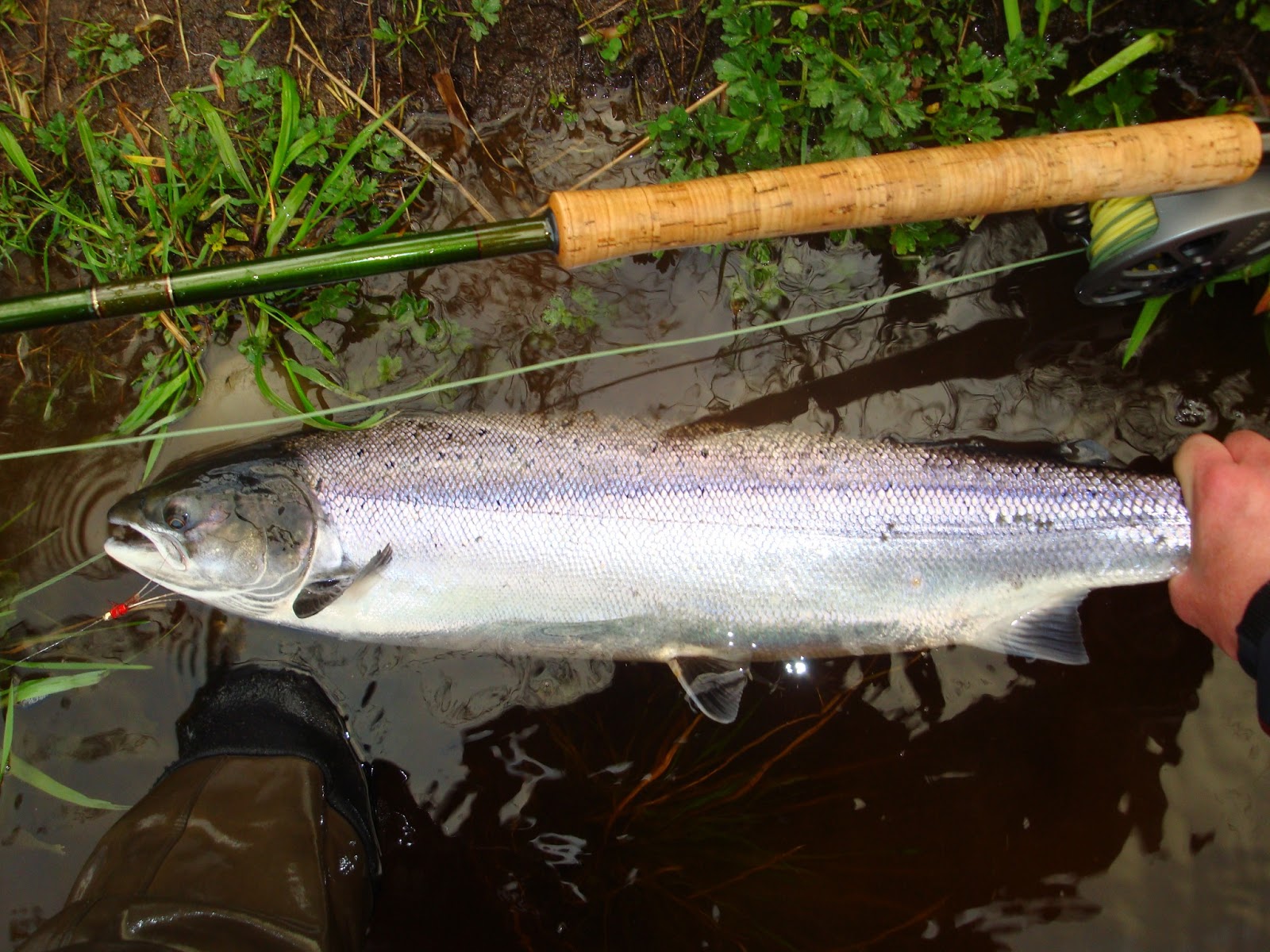 As I was releasing the fish, I heard a shout from the top of the pool and saw that another angler was into a fish. By this time, it was obvious that the river was rising fast so I went up to help the chap land his fish. The angler was in a strong fish which was giving him a great scrap in a rapidly rising river. Fortunately the angler, Willie Kearney, had a landing net with him and after ten minutes drama we landed the fish. I took a few photographs of Willie's springer before releasing it safely to go about her business. one of the biggest traits of the Finn is the speed at which it rises during heavy rain. In the time it had taken Willie to land his fish, the river had become unfishable which heralded breakfast time. 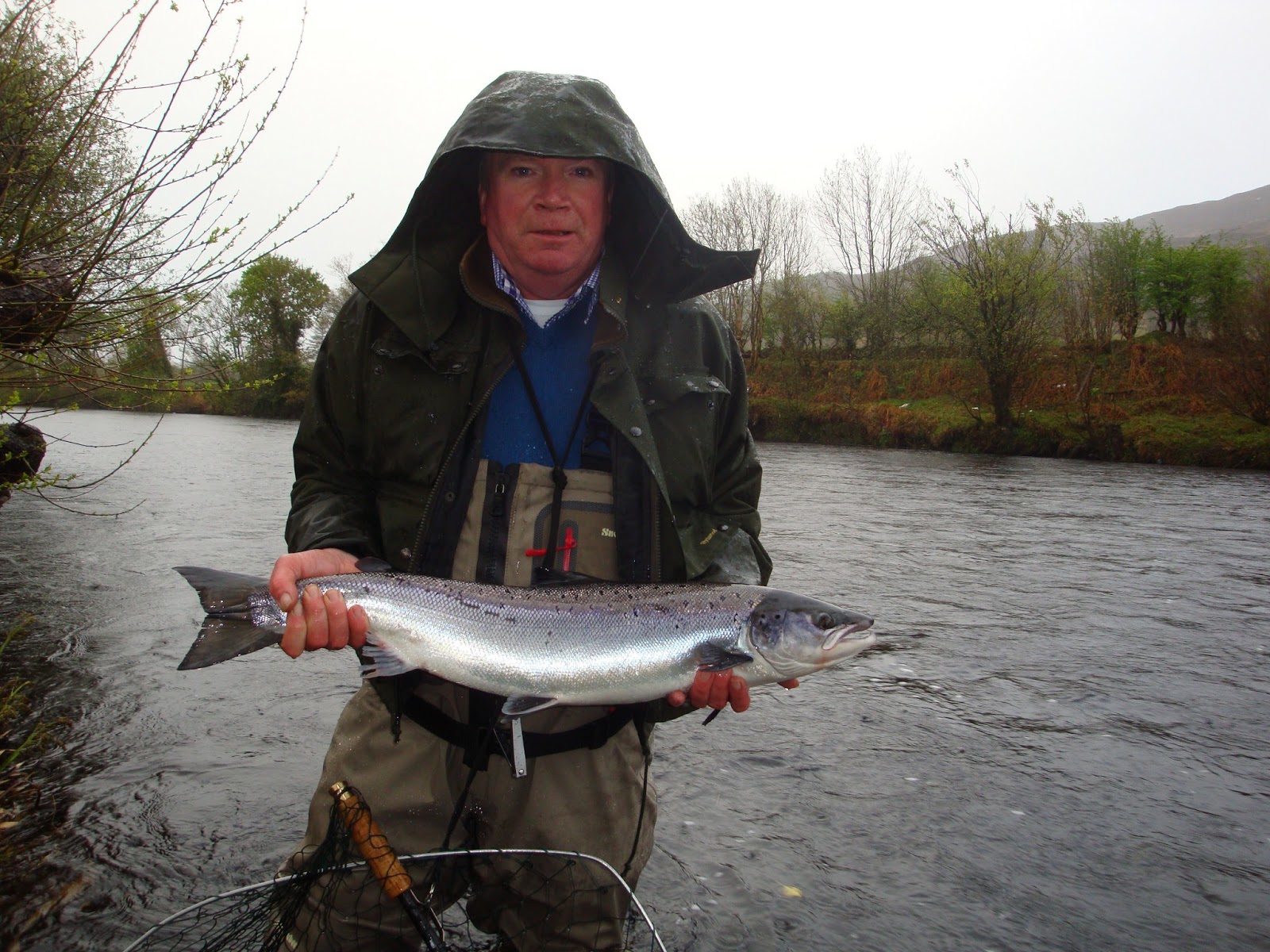 John drove up from Dundalk that morning but by the time he had reached Glenfinn, the river was unfishable. We enjoyed a leisurely breakfast with Sim and killed a few hours before making our way back to see if the river had dropped off. We met up with Willie again at the Ivy bridge and he gave us a fascinating insight into the history of the Finn and what the fishing was like in it's glory days. The river seemed to be clearing up a little so after half an hour or so, we reckoned Letterbrick on the Upper Finn could be worth a throw. We fished down the Corner Pool three times without a sniff, it's probably a couple of weeks early for up there but an early fish might just have been resting in the deep, even paced pool.
With an hour left on our beat session, we drove back down to the Graveyard and reasoned that our best chance of a hook up would be at the tail of the Graveyard. The river was still big at 3'8'' but the water was clearing nicely. I teamed my #8 Orvis Access Switch with a 510grain Airflo Skagit Switch coupled with 10' of level T14 leader. A large bottle tube Franc 'n Snaelda went on to the tippet; at least I would dig in to the heavy water. The switch rod was very handy and it meant that I was able to cast despite having to wade so close to the bank and under some overhanging branches. Slowing down the cast is key to good presentation with the skagit and I was able to comfortably cover three quarters of the river. I immediately threw in a large upstream mend and held the running line off the water until the skagit drifted downstream where I tightened up and got a nice angle on the swing. I must say that when the take came, I was surprised and delighted. A wee grilse of about 4lb gave a good account of itself in the heavy water but was soon expertly netted by John. All caught on video by Sim so with his permission, I'll try and get my hands on the footage and post the video tomorrow. I fished down the pool again and made brief contact with another fish on the skagit but it came off after a few seconds. All in all a rewarding days fishing.
Many anglers have been arguing about the merits of skagit lines and whether they are needed for salmon fishing on the side of the Atlantic. My take on things is that the skagit is a specialised piece of equipment excellent in certain conditions. I do, however, intend to experiment with lightweight skagits and standard polyleaders because I feel there is plenty of potential uses for them. Always keep an open mind when it comes to salmon fishing!
More stories to come in the next few days. We're just back from a very eventful weeekend on the Finn so I'll try and get the blog fully up to date over the next few days.
Posted by Unknown at 15:35